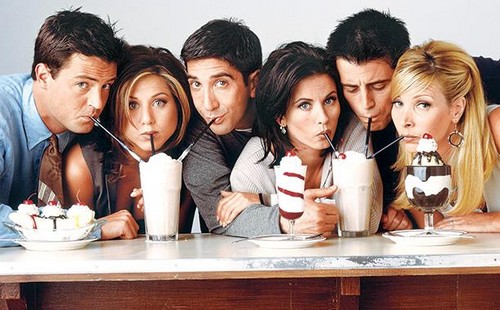 Jennifer Aniston fans the world over were thrilled that she got her man Justin Theroux to say “I do” at long last. But less impressed are friends of hers who were snubbed and left off the guest list. And three of those friends were her “friends” from Friends. Can you imagine? Jennifer Aniston snubbed half the cast of the hit TV show that made her famous (and rich) and only invited the ladies.

Not only was Courteney Cox there, but she was the maid of honor. And Lisa Kudrow was in attendance as well, but where were the three guy friends? Nowhere in sight. All three of the Friends guys were invited to Aniston’s wedding with Brad Pitt but none of them – David Schwimmer, Matt LeBlanc or Matthew Perry – scored an invite to her nuptials with Justin Theroux.

Schwimmer and Perry were both there when Aniston said “I do” to Brad Pitt and were close with her when it all fell apart. But could there be another reason behind the all-male Friends blackout at Aniston’s wedding? Tons of gossip has come out recently that Jennifer Aniston was cheating on Brad Pitt with Matt LeBlanc so Justin Theroux may not have wanted her ex-lover at their wedding.

And if Aniston wasn’t inviting Matt LeBlanc, it would be less obvious that it was a slight to him if none of the three guys were invited. So could Aniston have cheated Matthew Perry and David Schwimmer out of an invite to cover up not inviting her previous adulterous partner LeBlanc? According to In Touch, Schwimmer was shocked by the wedding snub.

A source told the tabloid they overheard David Schwimmer out to dinner with alleged Aniston lover Matt LeBlanc and they were talking about the Aniston-Theroux nuptials. The source said, “David was angry… he couldn’t believe he’d been snubbed because he was an important person in Jen’s life for 10 years.”

Matt LeBlanc was asked at a promotional event for his Showtime series Episodes why he wasn’t at the wedding and he said, “If she wanted me there, I would have been there.” And Matthew Perry was also quizzed on the wedding at a press tour for The Odd Couple and said, “I wasn’t invited. So what can you do?” That’s pretty telling if the guys were willing to be that blunt on the red carpet.

Usually celebrities are “red carpet nice” and save their scathing comments for behind closed doors or a well-timed Twitter war. But the guys were up front that Jennifer Aniston – possibly influenced by Justin Theroux – did not want her former “Friends” at her wedding for some reason. It can’t be that she’s moving on from her Friends relationships since Lisa Kudrow and Courteney Cox were there…

My money is that it’s about Matt LeBlanc. The alleged cheating was exposed by Star Magazine and the source was legit. Matt LeBlanc’s father that gave the quote to the magazine and said that LeBlanc and Aniston were fooling around on the set of their hit show. There’s a photo from 2004 that showed the two in an undeniable embrace months before Jennifer Aniston and Brad Pitt announced their split.

Hmm… fun to think about. With Friends like that, who needs enemies?