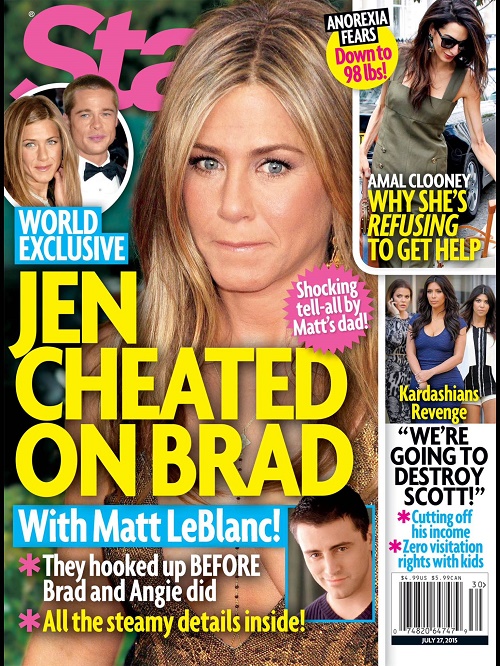 For the past decade we have believed that Angelina Jolie was a home-wrecker after Brad Pitt cheated on his wife Jennifer Aniston with his Mr. & Mrs. Smith co-star, Angelina Jolie. But, according to a shocking new report, Jennifer Aniston cheated first – with her “Friends” co-star Matt Leblanc! Aniston and LeBlanc’s chemistry on the popular sitcom was undeniable, and now we know why: They were having hot and steamy makeout sessions in their dressing rooms before filming!

The July 27 cover of Star Magazine features a photo of unlucky-in-love actress Jennifer Aniston and the bold headline screams, “Jen Cheated On Brad – With Matt LeBlanc! They Hooked UP Before Brad And Angie Did!” We have all heard the sad tale: devoted wife of 5 years who was devastated when Brad Pitt cheated on her with Angelina Jolie. Jen has always been painted as the victim, and Angelina Jolie has always been viewed as the ruthless home-wrecker. But, it turns out, Jennifer Aniston actually was unfaithful first.

Matt LeBlanc’s dad Paul dished to Star Magazine in an exclusive tell-all. “Matt had fun for sure. It was the making of him and the whole crew really. He even had a relationship with one of the girls – Jen. They would make out in the dressing rooms, he told me about it. It was when she was married to Brad Pitt.” Although Paul doesn’t go any further into detail about Jen and Matt’s affair, he completely destroyed the image we all had in our heads of poor, love sick Jen being cheated on by her evil husband.

Ironically, Jen always raved about how close she was with her “Friends” co-star LeBlanc in interviews, although we had no idea just how close they were. We can’t help but wonder if Brad Pitt knew how “close” Jen and Matt were and that is why he found Angelina Jolie. Is it possible that his and Jen’s marriage was already basically over because she had cheated on him? Let us know what you think in the comments below!