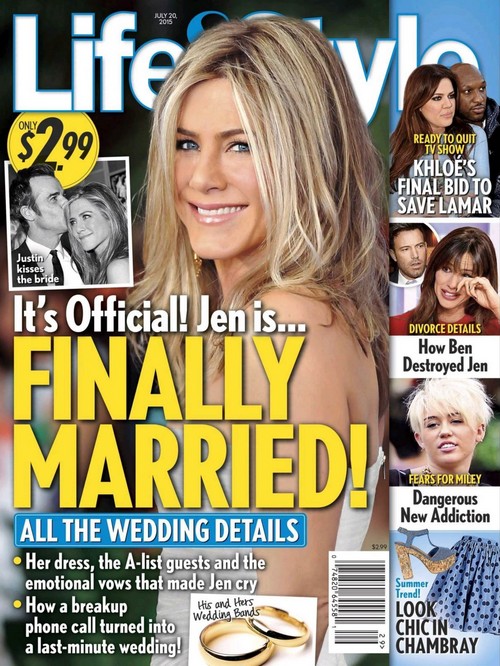 Is Jennifer Anniston finally married? The actress has been engaged to her fiancé Justin Theroux for literally years, and despite numerous false reports of wedding plans – the couple still hasn’t walked down the aisle and gotten married. But, according to the July 20 edition of Life & Style Magazine, Jennifer Anniston is now officially Mrs. Justin Theroux.

On August 10 Jennifer and Justin would have celebrated their third year as an engaged couple, and Jennifer was reportedly fed up. According to Life & Style Magazine she came to the conclusion that Justin was never going to marry her, and called him on the phone to break up with him. Apparently Jen’s threats hit home, and Justin decided it was time to make her an honest woman and marry her before he lost her for good.

Life & Style explains, “Despite failing to come to an agreement on a number of important issues – like having kids and where they will permanently live – the dup hashed out a last minute $170 Million prenup, gathered their closest A-List friends, and said personalized ‘I Do’s’ on a sunny Southern California afternoon.” Jen and Justin swore their super famous guests to secrecy, which included: Courteney Cox, Johnny McDaid, Chelsea Handler, Melissa McCarthy, and Selena Gomez. Ed Sheeran also attended the wedding, which is interesting since he was rumored to be dating Selena Gomez – and he even sang for the newly married couple at the wedding reception. Apparently when you are super famous, you have award winning singers come in and serenade your – rather than choosing any old cliché wedding song.

IF, and that’s a big IF, Jennifer Anniston and Justin Theroux really did finally get married – the couple is far from out of the woods. They still can’t decide on whether or not to start making a family or which state they will even live in, plus there is the fact that because of their hectic work schedules, they will be lucky if they see each other once a month. Do you believe that they finally got married, or is this just another false alarm? If they are married, do you think they will last? Let us know what you think in the comments below!