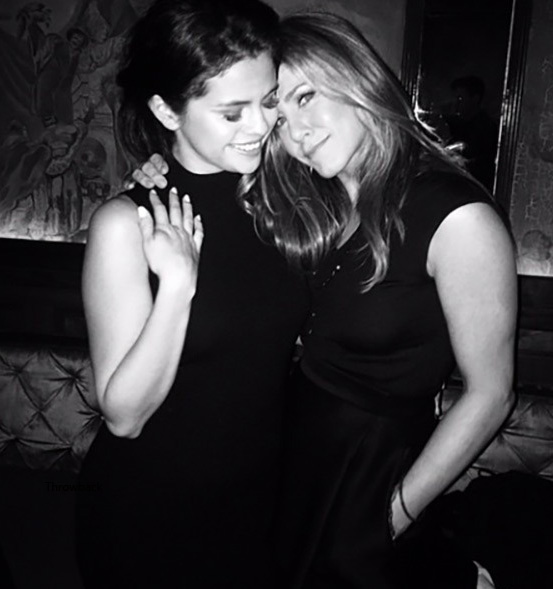 Watch out Courteney Cox, Jennifer Aniston has a new BFF! Selena Gomez and Jennifer Aniston hit it off last year when their management set them up on a lunch date together. Since then, Selena and Jennifer have been hitting up awards shows together and after-parties. The celebs rave about each other in interviews, and it looks like Jennifer has really taken SelGo under her wing.

The July 20 edition of OK! Magazine reveals that Jennifer Aniston’s pals are a little baffled by her new friendship with the singer, who is literally half her age. And by pals, we are sure they mean Courteney Cox – who is reportedly bitter about Jen replacing her with the young, hot celeb. No one likes being ditched by their BFF, especially when it is for someone half your age. An insider dished to OK! Magazine, “No one has openly discussed it with Jen, but all of her longtime pals are a little confused.”

Rumors popped up last year after the Oscars claiming that Jennifer Aniston was furious with Selena Gomez because she was flirting with her fiancé Justin Theroux. But, according to OK! Magazine’s insider, that couldn’t be any further from the truth. As a matter of fact, Selena, Jen, and Justin supposedly hang out together all of the time, and “they are like a little family.”

It does actually make sense. Selena went through this dark phase and fired her parents from her management team and is rumored to be feuding with her family. And Jennifer Aniston is desperate to have a child of her own. So, in reality, they are actually a match made in heaven. Selena gets interim parents, and Jen gets a fake daughter to dote over. Now it all makes sense!

What do you think of Jennifer Aniston and Selena Gomez hanging out? Do you blame Courteney Cox for being jealous? Let us know what you think in the comments below!