Angelina Jolie, Brad Pitt Divorce: Breakup Of Brangelina – Couple Agrees To Fake Marriage Until ‘By The Sea’ Movie Is Released 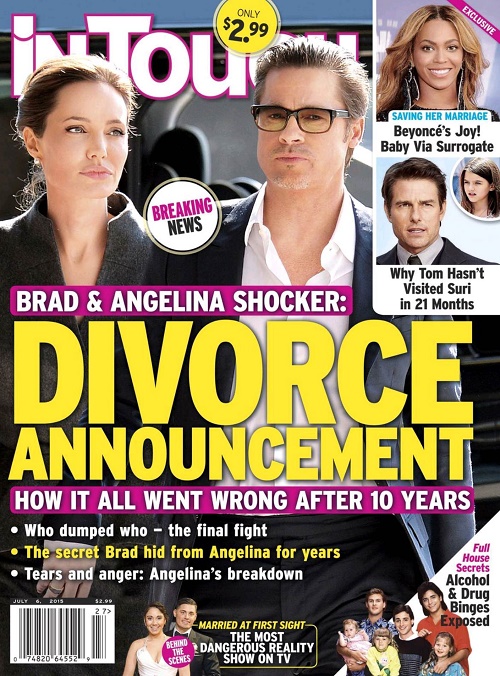 Angelina Jolie and Brad Pitt’s marriage is in serious trouble, and the couple are moving full-steam ahead with their rumored divorce. Brad and Angelina may have been together for 10 years, but in 2014 they shocked everyone by finally getting married. Rumor had it that the reason the couple decided to tie the knot after all of those years was because their relationship was in trouble. Sadly, it looks like saying “I Do” and exchanging wedding rings wasn’t even enough to stop the demise of Brangelina.

The July 6 cover of In Touch Magazine’s headline reads, “Brad And Angelina Shocker: Divorce Announcement – How It All Went Wrong After 10 Years.” The bold headline isn’t exactly shocking to anyone who has been following the Brad and Angie saga in the tabloids over the past year – the couple has literally been falling apart right before our eyes. Where did they go wrong? The real question is where didn’t they go wrong? Brad and Angelina’s divorce has been a long time coming.

Brad and Angelina have been struggling to keep their marriage together, but according to In Touch Magazine’s sources – it is Brad who has had enough, and informed his wife that it is over. The insider dished, “Brad’s the one who is calling time on their marriage. He’s told Angie that they are over. He is beyond miserable and he wants out. He says that she has controlled him since day one of their relationship.” Of course, Angelina’s jealousy issues didn’t help their marriage any, nor did Brad’s alleged cheating scandals. It was obvious there was trouble in paradise after their infamous balcony shouting match in Sydney earlier this year.

Angelina Jolie has convinced Brad to “hang in there” until their film “By The Sea” is released in November. Angie worked tirelessly writing and producing the film, and they both starred in it together – it’s basically Brangelina’s baby. And, if Brangelina get a divorce, the film will be a complete dud. They’re using their brand as a couple to promote it. But, according to In Touch’s sources, as soon as they are done with “By The Sea,” we can expect an official divorce announcement.

Are you surprised that Brad and Angelina are getting a divorce, or did you see this coming a mile away? Do you think that they might be able to mend their relationship, or is it over for good? Let us know what you think in the comments below!