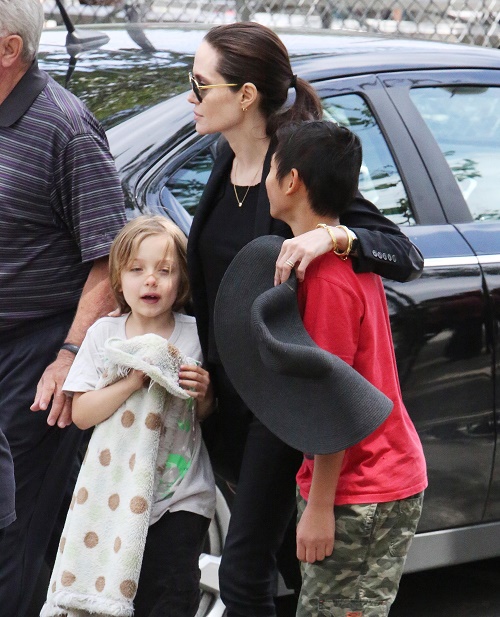 Brad Pitt and Angelina Jolie are broke! We are still trying to wrap our minds around how two of the most successful and highest-paid actors in Hollywood could be millions of dollars in debt – but according to a new report it is the result of their lavish lifestyles and over-spending. A new report reveals that Brad Pitt and Angelina Jolie are a whopping $35 Million in debt!

It’s overwhelming to consider how much money Angelina Jolie and Brad Pitt gross each year, and even more shocking to think that they could burn through all of it and then some. Where are their hundreds of millions of dollars going? We get that raising six kids can be expensive, but middle class families manage to do just that every day. The June 8 edition of OK! Magazine reveals that first and foremost, one of Brad and Angie’s downfalls are how generous they are. In 2014, when they sold their wedding photos to People Magazine for a staggering $5 Million, they donated every penny to a charity!

Brad Pitt and Angelina Jolie are generally considered pretty humble – but they are actually living a life of luxury. When they packed their kids up on went on vacation last year, OK! Magazine reveals that they brought along 12 nannies, and a team of tutors for their children. The couple is estimated to spend over $1 Million a year on childcare alone. The tabloid goes on to reveal that Brad and Angelina even purchased their own plane recently, and when they aren’t flying privately they refuse to purchase anything but first-class seats for their family of 8. Brad and Angelina also own mansions in Los Angeles, New Orleans, New York, and Europe – and they have a full staff on hand at each mansion to keep the houses up to par, even when they aren’t staying there.

It sounds like Brad Pitt and Angelina Jolie are in for a rude awakening – and they might even have to make horrible sacrifice and sell their plane or one of their mansions to pay off some of their debt. How ridiculous is it that Brad and Angie are actually in debt right now, especially when you take into consideration how much money they make? Do you think they will sell off some of their luxuries, or just stop donating so much money to charity? Let us know what you think in the comments below!