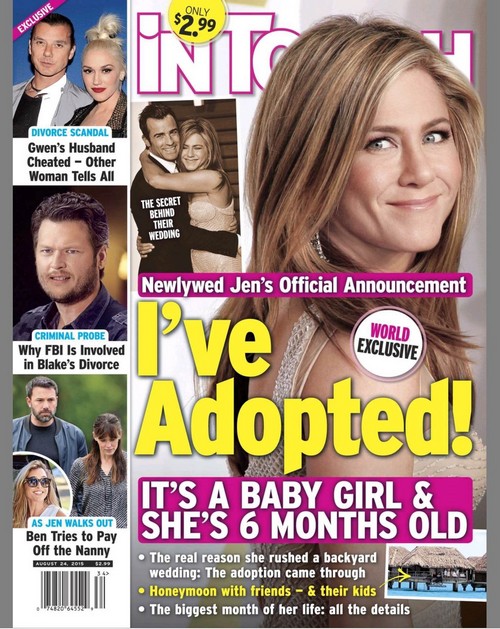 The cover of In Touch Magazine features a photo of Aniston, and the headline reads: “Newlywed Jen’s Official Announcement – I’ve Adopted!” The cover goes on to tease, “It’s a baby girl and she is 6 months old.” According to the tabloid’s inside sources, Jen was originally planning on throwing Justin a 44th birthday party in their Bel-Air backyard, however at the last minute they learned that their adoption had went through – so they had a change of heart and decided to throw together a wedding so that their new baby girls’ parents were married, and they were a real family.

So when will we get to meet Jennifer and Justin’s new daughter? According to In Touch Magazine’s insiders, “Jen has made an official announcement to a few close and trusted friends. She told one person that she had not met the baby yet, but that was a few weeks before their wedding. Jen said everything has been approved and she will be bringing the baby home within six weeks. The adoption wasn’t talked about openly at the wedding. Not everyone there knew about it, but a lot of the guests did.”

Jennifer Aniston and Justin Theroux’s relationship has been pretty rocky at times, and they have reportedly gone months without even seeing each other – but the couple is hopeful that a wedding and a baby will pull them out of their slump, and this is the beginning of a new era for them. Do you think that Jennifer and Justin’s marriage will last? Will adopting a baby make their relationship stronger? Let us know what you think in the comments below!