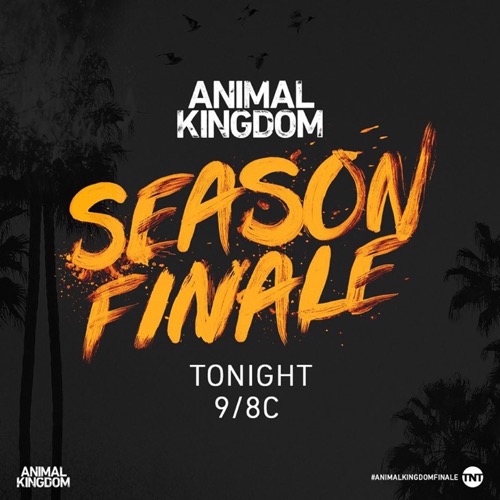 Tonight on TNT Animal Kingdom airs with an all new Tuesday, August 9 season 1 finale called, “What Have You Done” and we have your weekly Animal Kingdom recap below. On tonight’s episode, Baz (Scott Speedman) is perplexed by Catherine’s (Daniella Alonso) vanishing and tracks all leads in the Season 1 finale.

On the last episode, The Codys aimed for the biggest score of their lives as the cops put J in an impossible position. Did you watch the episode? If you missed it we have a full and detailed Animal Kingdom recap, right here for you.

On tonight’s episode per the TNT Synopsis, “Baz is perplexed by Catherine’s vanishing and tracks all leads in the Season 1 finale. Also: Authorities close in on the Codys, with J caught in the middle.”

Tonight’s finale episode of Animal Kingdom looks like it is going to be great and you won’t want to miss it, so be sure to tune in for our live Animal Kingdom recap at 9:00 PM EST! While you wait for our recap hit the comments and let us know how excited you are about the season 1 finale of Animal Kingdom.

Catherine was dead and it was all Smurf’s fault! Smurf had played her mentally unstable son Pope and had made him believe that Catherine was going to betray him again as well as his family. But Smurf knew better than that. She knew that Pope and Catherine had never been in a relationship with each other. So she played on Pope’s feelings for the late Catherine to convince him that Catherine was a threat and needed to be killed. And yet neither Smurf nor Pope were willing to tell Baz what they did because they both acknowledged how wrong Catherine’s death had been.

Catherine wasn’t just this woman that Baz was seeing. She was his live-in girlfriend that he had been seeing since they were kids and more importantly she was also the mother of his child. At least the one child that he was even willing acknowledge, anyways. Yet, the most that either Smurf or Pope could offer as a way to help Baz through this trying time was extra babysitting. Smurf had taken it upon herself to look after Lena and help the little girl cope with a missing mother. So that’s what everyone thought. Everyone thought that Cath was missing when in actuality she was dead and two people knew it.

Though Baz just couldn’t accept a missing spouse. He wanted answers so he grilled his daughter until she revealed as much as she could remember and it wasn’t much. Lena was still a kid so she had been fast asleep when Pope took out of the house and truthfully it had taken her some time to simply wake up for up those few seconds which she did, but what she did remember was being in her mother’s car and that a man had been driving. So Baz had questioned his daughter and was even beginning to yell her for not remembering more when Smurf interrupted them. Smurf had said that he should take easy on his daughter so she had played the protective grandmother to perfection when she stopped them.

Smurf however, had pushed things a little too far when she later tried to talk to Baz and convince him that Catherine must have run off with someone out of spite. Baz was technically cheating on Cath with woman named Lucy after all. But Baz called BS on Smurf’s assumptions because he said that there was no way that his Cath would ever leave Lena behind for some guy. So Baz wasn’t buying the initial story and he suspected that there was more behind Cath missing with her passport and luggage than let on. And because Smurf realized that she couldn’t manipulate Baz as easily as she could her other sons, she then decided to change things up and suddenly remember Vin.

Vin was the guy that Pope had befriended in prison and it seems that Vin had gone as far as to protect Pope while they were both inside. However, their relationship quickly changed after they were both released. Vin felt that Pope and Pope’s family owed him for what he did for Pope. So he had demanded to become part of their business and then he had gotten angry after they refused him. The Codys was a close-knit family so they didn’t want outsiders coming in and had barely been able to trust J for that matter and he was blood yet Vin had ultimately showed how unstable he was in the end when he had turned down the money Baz offered him and had thrown back at Smurf.

And so naturally Smurf used that encounter. She told Baz that Vin had been by the house and that he had made threats. So that had made Vin look guilty for whatever happened to Catherine and Baz hadn’t honestly needed much to go off the deep end. He knew that something was wrong and so he thought that beating up Vin would give him the answers he needed and enlisted Pope’s help to catch Vin off-guard. Yet, beating the living daylights out of Vin got him to reveal he killed two men in his life and had never laid a hand on Catherine’s head. And regardless of what Vin ended up revealing, the brothers thought they still had to kill him anyways in order to cover up what they had did to Vin to get that information.

So it was not a good day for Baz because he had still been left without answers yet Pope had thankfully had a conscience and decided to let Vin live. Pope later took Vin to a bus stop and have him some money. Possibly as a way to cover up medical costs as well as buy his silence. Though the police still came knocking on the family’s door after J had held up his end of the deal. J had texted Det. Sandra Yates and her partner when he saw a flood of cash in the kitchen so that had allowed the cops to get the necessary warrant and come raid the home though the raid itself didn’t go as planned. Mainly because J hadn’t been in the house at the time and neither was the money there for the police to see.

But the reason the cops didn’t find anything at the house was because J had apparently double-crossed the Sandra. J had seemingly told his family beforehand that the detectives were waiting for a message from him to raid the place so that had allowed them to hide the money in the pool drain while J went out and made a copy of message he had recorded. So by time J did come back to the house, he had enough evidence on the detective to get her to back off because he had recorded Alexa admitting to sleeping with him under Sandra’s orders. And technically that was rape because J was still underage.

J was also Alexa’s student by the way who had recently lost his mother so that had made everything appear even more sordid. So J had let Sandra know that he could paint things to make what happened look really ugly for her and for her boss although surprisingly he hadn’t backstabbed Sandra just because of the whole Alexa’s thing. There had unfortunately also been a situation with his mother. Where Sandra used to come by when he was kid and offer his drug addict of a mother whatever drugs she needed for a fix if she would testify against her family. And so that come into play as well.

The detective though hadn’t known that J had remembered all of that so that had come as a nasty little surprise for her. However, it had been a treat for J who he had remembered that his mother had stayed a loyal to a family she hated because she had hated Sandra more. So J had basically demolished the detectives’ case against his family and that more than anything else had sealed his fate within the family. Smurf had eventually decided to forgive him for siding with Codys in the end so she had a place for him in the family business.

And later Smurf had handled Paul Belmont, by threatening him with his daughter who was now Craig’s girlfriend. So that made things awkward around the house for J and Nicki both. Though Smurf had also gone out and killed the man that gave her the nickname ‘Smurf’. He had been some loser boyfriend of her mother’s and she had never forgiven him for leaving her mother to bleed out after a failed heist while he made his escape and went on to build a life for himself.

So justice was sweet in the end for everyone!