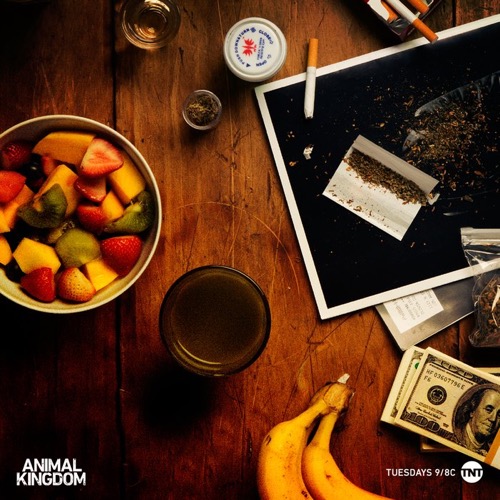 Tonight on TNT Animal Kingdom airs with an all new back to back Tuesday, July 19 season 1 episode 7 called, “G**damn Animals” and we have your weekly Animal Kingdom recap and spoilers below. On tonight’s episode, Craig (Ben Robson) and Deran (Jake Weary) throw a party as Smurf (Ellen Barkin) handles unfinished business.

On the last episode, Smurf did what needed to keep the family intact when Pope tested positive for drugs.  Did you watch the episode? If you missed it we have a full and detailed Animal Kingdom recap, right here for you.

On tonight’s episode per the TNT Synopsis, “Craig and Deran throw a party as Smurf handles unfinished business. Meanwhile, Baz is forced to accelerate his timetable as he finalizes his big scheme, and J makes a perilous error.”

Tonight’s premiere episode of Animal Kingdom looks like it is going to be great and you won’t want to miss it, so be sure to tune in for our live Animal Kingdom recap at 9:00 PM EST! While you wait for our recap hit the comments and let us know how excited you are about season 1 episode 7 of Animal Kingdom

The family comes first and apparently everything else has to come second. However, in spite of what Baz preached the other day, it was Smurf that was breaking that cardinal rule because she wanted to take off to Vegas while they were in the middle of a crisis. Smurf it seems had told the boys that she was going to take in a show with Toby. So they all thought that she was leaving on some kind of romantic vacation even though J was missing and Pope was still acting weird about his medications.

Pope had recently found out that his mom was crushing his pills into his food. So he has been acting weird ever since and both Smurf and Baz have been trying to keep the fact Baz knew about what she was doing a secret. Yet, no one needed to tell Pope that Baz knew what Smurf was doing. He just knew so he had later confronted the other man and said that he knew Smurf wouldn’t have acted if Baz hadn’t okayed first. And so Pope ended up addressing the elephant in the room afterwards.

Pope told Baz that he doesn’t know if he likes him when he’s drugged up or sick. But that he secretly suspects that Baz likes him when he’s sick because then there wasn’t much competition for him. So Pope had pretty much accused Baz of wanting to push him down just so that he could be in charge of their jobs though, without Smurf around, it was also clear that there’s no one holding Pope back from being a complete mess. Pope eventually had a run-in with a friend from prison and that supposed friend had wanted him to commit to another job even as Baz was going ahead with his plans for Paul Belmont.

Paul Belmont was the linchpin in Baz’s latest job. If he could turn Paul and get him to work with the family then Paul could help them steal a lot of money from a military base that he had access to. So Paul was very important to Baz’s plans for the future and he was thinking about his future because he wanted the money from that job to fund an easier lifestyle for his family with Catherine. Though as it turns out there was simply one person standing in Baz’s way and that was J. J had been dating Paul’s daughter and then out of nowhere dumps her before Baz could truly ingratiate himself in that family.

So Baz was pretty ticked off with J and Smurf was actually worried about J when he suddenly disappeared. J had found out what that his family wanted to pull off another robbery with his girlfriend’s father so he dumped her in order to try and protect her from what he knew they were going to do. However, when J ran off, he ran to Alexa Anderson’s place. Alexa who was his teacher had become something of a friend to J so he thought that he could trust her and even speak to her about what was wrong at home, but it turns out that J couldn’t even trust Alexa.

Alexa had secretly been using him because was an informant for the police and so she had been wearing a wire when J talked to her about his feeling stealing from people. So later Alexa had passed on that information to the detective that’s been hounding her and surprise of all surprises the detective couldn’t just be happy with what she had. Det. Sandra Yates had said that J hadn’t been specific enough and that his information couldn’t even implicate him because it had all been hearsay. But Alexa had been shocked when the detective mentioned implicating J.

Alexa had been told and so she naturally assumed that they weren’t out to catch J committing a crime. He was a teenage kid after all and he had only recently become involved with his family after his mother died leaving him without any other option. Yet, the detective has apparently been lying to Alexa this whole time because she did want to catch J committing a crime and then offer him a plea deal if he were to testify against his family. So propositioning Alexa and telling her that they needed to get J away from those kind of people were just what she needed to say to fool the other woman.

Alexa however, wasn’t like the detective. She couldn’t just live with the fact that they were going to destroy a promising student’s life and they were going to destroy it because the detective didn’t mind that J would have a rap sheet while Alexa did. So that had made Alex later unravel later. She had gone on to take some pills and, by time J had arrived back at her house, he had found her in a familiar condition. He had found her practically spewing her guts out all over her floor and that had reminded him of his late mother. J’s mother had been a drug addict so he had known how to take care of Alex even if he didn’t like doing so.

But after J had cleaned her and had gotten some liquids into her, Alexa had surprised him by crossing a line that neither of them could come back from. Alexa had kissed him and she was undressing herself before he could even have a chance to tell her that they shouldn’t. So what happened next was between them though Alexa eventually sobered up and came to regret what she did. She had been upset about what happened and hadn’t known what to do next because she felt that she had to warn J about what was really going on meanwhile J had tried going home to his family.

J had pretended that everything was fine and that there wasn’t a problem yet he had seen Paul at the house and that had told him that Baz was still going ahead with his plan. Although Baz had a bigger problem on his hands than whether or not J was willing to cooperate. Pope’s friend from prison had apparently gone to him after Pope turned down a job so the friend was prepared to blackmail if not threaten Baz and his family if someone didn’t help commit a robbery. So Pope had dragged Baz into his latest problem and now there was an unstable ex-con following Pope around town which couldn’t be a good thing.

Pope couldn’t be followed while they were in the middle of committing their biggest job yet. However, Pope had gotten sloppy. His friend from prison had actually helped him while they were both inside so Pope had felt in some indebted to him and hadn’t thought that it was a problem if someone was keeping tabs on him. So he hadn’t warned is family even as he was followed while following Catherine to a point where he was stalking her or had gone home to his brothers that were making a mess back at the house now that his mother was away. And so now everyone was on this guy’s radar which was tricky because Baz had just been informed that he was going to expedite his plans.

The troops were about to deployed it seems so Baz and his brothers had to rob the base within the next week. Though beside his problems with Pope, he wasn’t sure if he could trust J and Smurf had come back home pretty messed up. Smurf had apparently come across her mother’s former boyfriend who had left her to bleed out during a robbery gone bad. So Smurf had gone on her vacation intending to kill someone and instead ran into one of the few people that had genuinely loved her when she was a kid.

And so that apparently got through Smurf’s icy reserve.