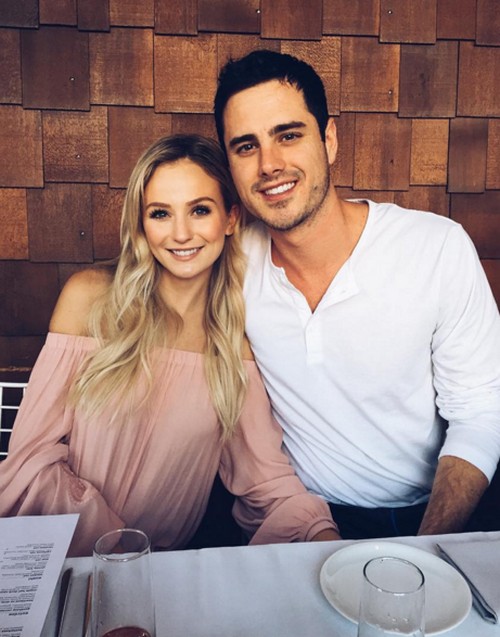 The Bachelor Ben Higgins and his fiancée Lauren Higgins have not set a wedding date and a break up is near – and according to a new report it will be a miracle if Ben and his 2016 winner don’t break up before they make it down the aisle.

When Ben Higgins told Bachelorette Jojo Fletcher he loved her during Season 20 of The Bachelor, we all knew that his engagement to Lauren was doomed – and it looks like those three words are catching up to the couple.

America was shocked when Ben Higgins told TWO women that he loved them during Season 20 of The Bachelor, but what was even more shocking was the fact that his 2016 winner Lauren Bushnell sort of breezed past it like nothing happened and tried to brush it off.

But, as predicted, Lauren Bushnell was not as cool as she pretended to be about Ben’s love for Jojo Fletcher– and it is starting to take a toll on their engagement.

An insider dished to Life & Style Magazine, ““Lauren tries not to think about it, but she’s traumatized that Ben told another girl he loved her.” And, to add insult to injury – Ben is still talking to his college girlfriend too! As if Lauren isn’t already scarred by Ben’s love for Jojo, she has to worry about his love for his ex-girlfriend too.

Life & Style goes on to say that Lauren is moving to Denver to live with Bachelor Ben Higgins, but their relationship is already on the rocks. At this point, living under the same roof might hurt the troubled couple more than it will help them. A wedding date seems less likely than a break up.

Didn’t we all see this coming a mile away? There is no way any woman would be okay with their fiancé telling another woman that he loved her moments before he proposed. What do you guys think? Will Ben and Lauren ever get married? Stick with CDL as we continue our detailed The Bachelor coverage!

So happy to be at home cuddled up on the couch together. Also excited that I am FINALLY able to wear my hope bracelet in public. If you’re late like me you can still join the “Get Hope. Give Hope.” campaign. Check it out, order a bracelet from @mudlove and support jobs in Honduras and clean water in Africa. 👊🏼 #gethopegivehope