Bachelor in Paradise Recap Sarah Sent Home, Ashley I. Obsesses Over Jared, Vinnie and Izzy Break Up: Season 3 Episode 4A 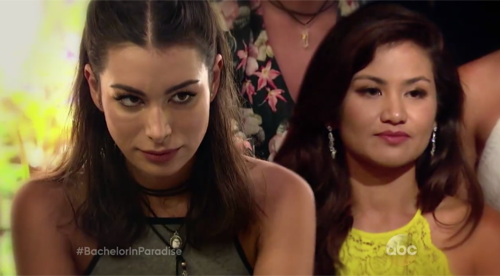 Bachelor in Paradise airs on ABC this evening with an all new Monday, August 2, season 3 episode 4A and we have your weekly Bachelor in Paradise recap below. On tonight’s episode, a frustrated bachelor continues to deal with the emotional breakdown of his crying ex who is unable to move on from him.

On the last episode, a drama queen arrived in paradise and discovers her ex had met someone else and she’s forced to watch from the sidelines as he found love with another woman. Did you watch the last episode? If you missed it, we have a full and detailed Bachelor in Paradise recap right here for you.

On tonight’s show as per the ABC synopsis, “a frustrated bachelor continues to deal with the emotional breakdown of his crying ex who is unable to move on from him; four single ladies look to the remaining bachelor wild card for their chance to secure a rose.”

Tonight’s episode of Bachelor In Paradise kicks off where we left off last week – Ashley Iaconetti has had a full-blown meltdown over Jared in the middle of a cocktail party, right before a rose ceremony. Jared and Ashley are arguing over which one of them should quit the show and go home. Ashley sobs about how much she is in love with Jared – he shuts her down, AGAIN, and tells her that he doesn’t like her like that, and he likes Caila.

Jared gets irritated and storms off, he apparently has heard enough of Ashley I. begging him to be with her. Jared takes Caila aside, he tells her that he really likes her and he doesn’t want all of this drama with Ashley to come between them. Meanwhile, Ashley is at the bar sobbing to the bartender Jorge about how horrible it is to see Jared with another woman.

Meanwhile, Carly and Evan go for a walk to talk about their relationship. Carly apologizes for the way that she has been acting towards him, she confesses that she has had a change of heart, and she realizes that after all she does have feelings for him. Evan of course is thrilled. He finally gets the girl!

Sarah is trying hard to make sure that she gets Daniel’s rose – or else she will be going home tonight. She surprises him with a birthday cake that she baked for his half-birthday. Emily and Haley are in trouble though, they need Daniel’s rose or else they are going home. Haley decides to take one for the team and right before the rose ceremony, she plants a kiss on Daniel.

The twins aren’t the only ones with their eyes on Daniel’s rose, Ashley I. stops sobbing long enough to have a heart to heart with Daniel too. He gives her some advice about moving on, and finding someone that actually wants to be with her.

Ashley leaves in her limo, then she has a meltdown, and tells the limo driver to turn around. Ashley goes back to paradise and apologizes to everyone for the way she behaved. Ashley says that she didn’t come here with an open mind, and she wants a second chance at finding love. Everyone agrees that Ashley should get a second chance in paradise, they let her stay, and she promises to turn over a new leaf and leave Jared and Caila alone.

The next morning, a new guy arrives in paradise, a super hot firefighter named Carl. Apparently, Carl was on Andi Dorfman’s season of The Bachelorette, but nobody remembers him. Carl sits down with the Emily and gets to know her, and then he invites her on a date. While Carl and the Emily are getting ready for their date, there is another new arrival from Andi’s season of The Bachelorette. Brett introduces himself, and he brought along a lamp, since he was known as “The Lamp Guy” when he was on the show.

Since Caila is gone on her date, Ashley I. uses the chance to bond with Jared and try to convince him that Caila is a backstabber and too flirty to be with one guy.

Caila, Brett, Carl, and Emily head out on a group date – they go on booze cruise, and spend the day on a boat full of drunk half-naked people drinking and dancing. Caila is miserable, she gives Brett the cold shoulder and admits to him that she wished she had just stayed in Paradise with Jared. Carl and Emily on the other hand are hitting it off amazingly, and Carl is dangerously close to getting to third base with Emily while they are dancing.

Caila returns from her date, and she steals Jared back from Ashley I. and tells him that he is the guy she wants to be hanging out with, not Brett. Ashley I. is devastated, she really thought that this was the end of Caila and Jared, and it’s not. She heads to the beach to cry and talk to herself about how horrible Caila is for Jared.

Later that night, another new guy arrives in Paradise, and it’s another guy that no one remembers from Kaitlyn Bristowe’s season of The Bachelorette. He introduces himself to everyone on the beach. Haley is pretty intrigued by the new arrival.

Jared fills Ryan in on who is dating who in paradise, and he tries to convince Ryan to ask Ashley I. out on a date. Ryan isn’t trying to get caught up in Ashley and Jared’s drama though, so he invites Haley on a date.

Lace and Grant and Izzy and Vinnie have been the most solid couples in paradise since the season began. Lace and Grant spend a romantic day in the hot-tub together, Grant confesses to Lace that he is in love with her, she breaks out in tears and is moved by what he says. Lace is falling for Grant, she’s just not ready to tell him that she loves him just yet.

Meanwhile, Vinnie thinks that he and Izzy are going to start a life together when they leave paradise. But, Izzy is starting to have doubts, and she has a huge crush on Brett. After spending an evening giggling on the beach with Brett and telling him how much she likes him – Izzy breaks Vinnie’s heart. She sits him down and tells him that she wants to explore her options and is only 75% into him, not 100%. Vinnie is pretty upset, for obvious reasons, and who could blame him?

The next morning everyone is gossiping about Vinnie and Izzy’s big break-up. Vinnie tells the guys that he is going to leave paradise. Nick thinks that when Izzy wakes up she is going to realize what she did and she just had a minor freak out, they convince Vinnie to talk to Izzy before he quits the show and leaves. Vinnie heads to Izzy’s room and invites her to the tree house to talk.

To Be Continued Next Episode …