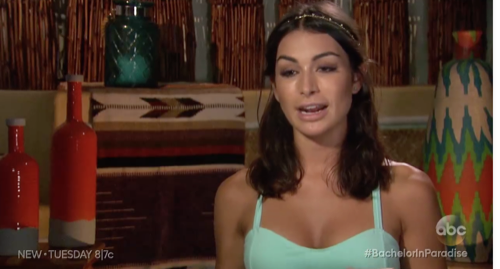 Bachelor in Paradise airs on ABC this evening with an all-new Tuesday, August 23, season 3 episode 4B and we have your weekly Bachelor in Paradise recap below. On tonight’s episode, a bachelor ends his relationship with a fickle bachelorette and leaves Paradise.

On the last episode, a frustrated bachelor continued to deal with the emotional breakdown of his crying ex who was unable to move on from him.Did you watch the last episode? If you missed it, we have a full and detailed Bachelor in Paradise recap right here for you.

On tonight’s show as per the ABC synopsis, “a bachelor ends his relationship with a fickle bachelorette and leaves Paradise; a popular couple return to Paradise and deliver a date card that stirs up drama for two couples.”

Tonight’s episode of Bachelor In Paradise picks up where we left off last week, Vinny was blindsided by Izzy, she revealed the night before that she wanted to hang out with Brett and get to know him. Vinny and Izzy have been a solid couple since day one of Paradise.

The next morning, Vinny tries to talk to Izzy and is hoping that she didn’t mean what she said about Brett. But, Izzy sticks to her story. Vinny is shocked, he was actually planning on getting engaged to Izzy at the end of the show. They have an emotional talk, and Vinny announces that Izzy “isn’t the person that he thought she was.” Vinny states that he is leaving Paradise, Izzy sobs and begs him to stay – but he takes a limo to the airport and heads home.

Jade and Tanner sit down with each of the couples to get to know them and see who they want to send on a special date. They are shocked when they talk to Lace and Grant and learn that he told Lace he loved her and she didn’t say it back. Their talk with Jade and Tanner has Lace and Grant on edge, they head to the pool and start arguing about how Lace is pushing him away.

Amanda and Josh basically beg Jade and Tanner for the date card. Josh even offers to “throw Tanner a little something under the table.” But, Tanner isn’t impressed, he thinks that Josh is fake and is putting on an act for them. Ashley I. is freaking out, she doesn’t want Jared and Caila to get the date card. She is scared that they will wind up getting married and be the next Jade and Tanner. Ashley takes Jade and Tanner aside and tells them that she doesn’t think they should give the date card to Caila and Jared, because Caila is fake. Ashley I’s plan backfires, though – and Jade and Tanner give them the romantic date card.

After their talk with Jade and Tanner, Jen is having some doubts about her relationship with Nick. Later that night they go for a walk, Jen explains to Nick that she really likes him, but she feels like their relationship isn’t moving forward because he has a wall up.

Caila and Jared head out on their romantic date together. They have a long talk over dinner, Caila lets Jared know that she thinks Ashley is hindering their relationship and making it hard for them to move forward. Caila is tired of them having to walk on eggshells. After they clear they air, Caila and Jared go for a late night swim and make out in the water. Meanwhile, Ashley is back in Paradise and freaking out and waiting for them to come home. She is literally making herself sick thinking about what Jared and Caila are doing on their date.

The next day, a new date card arrives in Paradise, it’s for Evan, he of course invites Carly with him. The date card is pretty vague, it just says that they are going to be part of an “ancient ceremony.” Evan and Carly head to Vallejo Ranch, they are taken in to a hut by men in head-dresses to help them “release their negative energy.” Inside the hut, the men start a fire and begin chanting. Carly and Evan’s spiritual ceremony does wonders for their relationship, and they leave closer than they have ever been before.

The next morning, Ashley takes Jared aside, she tells him that she thinks he is way more in to Caila than she is in to him. Ashley goes on to tell Jared that she thinks that Caila is a robot, and fake, and she is just leading him on to be on TV.

Of course, Jared runs upstairs and tells Caila what Ashley said to him. Caila is irritated, she has had enough of Ashley meddling in their relationship. Caila announces that she has had enough – she is going to go confront Ashley. Caila heads down to the beach and confronts Ashley. Ashley scoffs that Jared is never going to trust Caila as much as he trusts her. Caila puts Ashley in her place and tells her that she needs to focus on someone new and stop sabotaging their relationship.