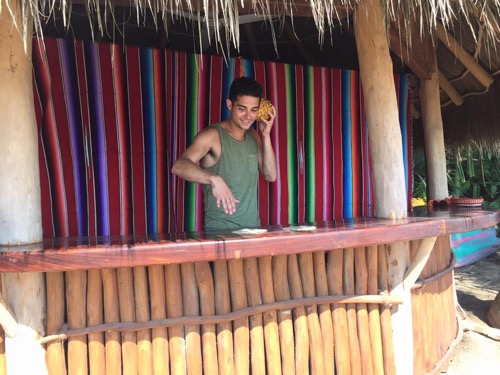 Bachelor in Paradise airs on ABC this evening with an all-new Monday, August 29, season 3 episode 5A and we have your weekly Bachelor in Paradise recap below. On tonight’s episode, the cast welcomes a hotly anticipated arrival who asks a desperate bachelorette for a date.

On the last episode, a bachelor ended his relationship with a fickle bachelorette and left Paradise. Did you watch the last episode? If you missed it, we have a full and detailed Bachelor in Paradise recap right here for you.

On tonight’s show as per the ABC synopsis, “the cast welcomes a hotly anticipated arrival who asks a desperate bachelorette for a date; insecurities test one couple’s limits and cause them to reconsider their relationship.”

Tonight’s episode of Bachelor In Paradise kicks off where we left off last week – Caila and Ashley are still having a super awkward conversation on the beach about Jared. Caila is trying to make things right with Ashley Iaconetti, but Ashley doesn’t feel like burying the hatchet with her. She’s livid when Caila says that Ashley is “like a sister to Jared.” Caila storms back to paradise.

Jared heads down to the beach to find Ashley, and of course, she’s crying her eyes out. Ashley sobs to Jared that it’s “too hard for her to see him with someone else.” Jared tries to work with Ashley, he tells her that he wants to try to build a relationship with Caila, and he thinks that if Ashley I. found a connection with someone else, then she wouldn’t even care about him and Caila.

Ashley heads back to the bar to get a drink, she’s feeling depressed because there are no guys in paradise for her. On queue, a new guy arrives in Paradise, it’s Wells from Jojo Fletcher’s season of The Bachelorette. Ashley is thrilled, she thinks that Wells will be the perfect guy to distract her from the Jared drama.

Of course, Wells has arrived in paradise with a date card. Everyone basically begs Wells to use his date card to take Ashley I. out because they are tired of her moping around and crying. Finally, he invites Ashley on a date and she accepts.

Ashley and Wells head in to town for a romantic taco dinner. It doesn’t take long before they start discussing Jared. Wells makes it very clear that he doesn’t want Ashley to just use him to make Jared jealous. Ashley insists that she genuinely likes Wells, but she’s scared she is going to screw it up because she hasn’t been on a date in so long. A stray dog crashes their date and Wells feeds it some of his tacos. Wells is actually surprised by how much fun he is having with Ashley, and it doesn’t take long before they share their first kiss.

Lace and Grant seem to be going strong – so it’s about time for her to sabotage the relationship. Everyone feels a little awkward at the pool when Lace flirts with Carl in front of everyone, including Grant. Lace and Grant get in an argument and she threatens that she might not give him a rose. Grant takes Lace aside and tells her that he is tired of her being disrespectful to him, Lace tells him to get out of her face and then heads to her room to cry. She sobs to Ashley and Amanda that she just wants to go home.

Later that night, Grant and Lace have another awkward run-in. Lace informs Grant that she is just going to go home. He tries to tell her that he loves her, but she brushes him off and tells him to stop being “so dramatic.” Grant gives Lace a pep-talk, and he apologizes for overreacting earlier. Lace apologizes too, and they seem to be making up, for the moment anyways.

Jen and Nick are still going strong, even though they don’t get a ton of free time. For the first time in paradise, they decide to spend the night together. Amanda tells Jen and Nick that they can sleep in the tree house, she wants to sleep in her own bed. Amanda goes to sleep, then Nick and Jen head to the tree house. But, Josh won’t let them – he says that is his and Amanda’s bed. Josh feels pretty foolish when he finds out that Amanda ditched him and is sleeping in her room by herself. Josh tries to wake Amanda up and wants to know why she isn’t sleeping with him. He’s obviously upset that the poor girl just wanted to get some sleep.

It’s time for the next rose ceremony. It’s week 4 and the girls have the power this week – they will be passing out the roses. Everyone heads to the cocktail party, and there are a few guys scrambling to try and make sure they don’t get sent home. Lace and Grant seem to be in a good place, so he’s not worrying about not getting a rose tonight. Carly and Evan are still going strong as well – there aren’t any doubts that Evan won’t be receiving a rose from her. During the cocktail party, Carly and Evan head down to the beach, Evan confesses to Carly that he is “falling in love with her.”

Meanwhile, back at the cocktail party, Daniel is determined to get a rose. He surprises Emily with a plate of chicken nuggets and onion rings – which are apparently her favorite foods. Then, he takes Izzy aside and gives her a lamp, since she dumped Vinnie for Brett and apparently has a thing for guys with lamps.
The twins sit down with Nick Viall, Emily and Haley are worried about Amanda, they think that Josh is not a good guy and after the way that he acted last night over her going to bed alone – they think it might be time to stage an intervention. Nick agrees with Emily and Haley – he points out that in Andi Dorfman’s tell-all book, she said some pretty scary stuff about Josh being aggressive and having a bad temper.

Before Haley and Emily leave, they take Amanda aside. They want to let her know that Josh has a really bad temper, Emily tells Amanda that she needs to ask him direct things about Andi’s book. Amanda starts crying, she says that she’s confused. Meanwhile, Josh watches their whole conversation from up on the balcony, he is obviously aware that they are talking about them. Before Haley leaves, she tells Amanda that she thinks Josh is using her to clean up her image because she is “America’s Sweetheart.”

Josh heads down to the beach to try and talk to Amanda – she cries that she doesn’t want to talk about it. Josh is pretty confused, he has no idea what is going on. Amanda explains what the twins said to her, and Josh says that what Andi wrote in the book was “Absolutely ludicrous.” Josh is getting pretty annoyed with Amanda, he says that his intentions with her are 100% pure.

Josh heads up to the cocktail party and starts shouting at everyone. He yells at everyone to stop talking about him behind his back. Nick calls Josh out in front of everyone and questions whether or not Josh’s feelings for Amanda are real. Josh and Nick wind up screaming at each other in front of everyone, Josh thinks that Nick is just jealous because he likes Amanda.

Ironically, while Josh s trying to prove that he doesn’t have a bad temper, he kind of shows everyone that he has a bad temper. Josh announces that if Amanda doesn’t believe him, then he is going to go home, then he starts packing his bags.

Amanda heads down to the beach to talk to Josh – he tells her that if she doesn’t want to get to know him, then he is going to go home. Amanda explains that the twins are her best friends, and she trusts them – but she knows that everything people are saying about Josh is not true. They seem to make up, and Amanda even apologizes, which is bizarre because she didn’t do anything wrong.

The next day, all of the drama dies down, and then a new girl named Jami arrives. No one is there to really greet her, except for Wells – so she invites him on a date with her. Wells happily accepts, but he feels a little weird because Ashley is asleep when he leaves and he doesn’t even get a chance to tell her what is going on. Everyone gets up and has breakfast – and they’re a little nervous, they are afraid that Ashley is going to freak out when she wakes up.

Nick takes Ashley aside and tells her that Wells left on a date with a new girl named Jami. He’s a little surprised, but Ashley seems to take the news well. Ashley I. is confident with her relationship with Wells, little does she know – Wells and Jami are actually having a blast together.

Ashley and Caila have a little chat on the beach, about Jared … again. Ashley points out that Caila lied to her, and promised not to date her ex. Caila feels guilty, she goes back to Jared and announces that she has decided to go home.