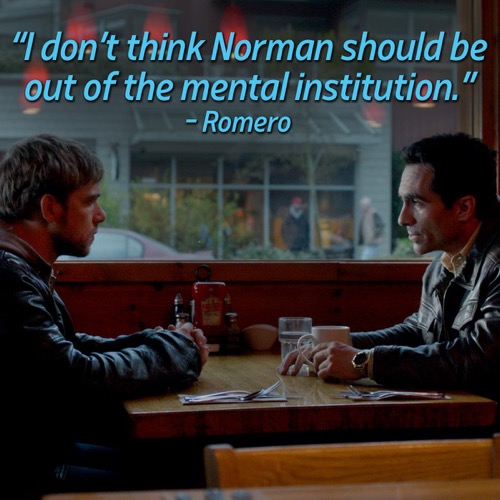 Bates Motel airs tonight on A&E with an all new Monday May 16, season 4 finale called “Norman” and we have your weekly recap below. On tonight’s episode, the relationship between Norman (Freddie Highmore) and Norma (Vera Farmiga) faces its toughest test; Romero (Mike Vogel) faces pressure due to his actions.

On the last episode, Norman planned a special event for Norma; Romero faced pressure due to his actions; and Dylan considered reaching out to Norman. Did you watch the last episode? Did you miss it, we’ve got a detailed recap right here for you.

On tonight’s episode as per the A&E synopsis, “the relationship between Norman and Norma faces its toughest test; Romero faces pressure due to his actions; and Dylan considers reaching out to Norman.”

Tonight’s episode is going to be a great one and you’re not going to want to miss it. Bates Motel airs on A&E at 9:00 PM EST, while you wait for our recap hit the comments and let us know how excited you are about the season 4 finale of Bates Motel. The last episode made us believe Norma had met her maker, do you think she is dead?

Romero was apparently the only one that suspected the murder/suicide at the Bates House wasn’t what it appeared. However, no one believed him when he said that Norman should be investigated or when he outright accused his stepson of his own mother’s murder. And the letter might have something to do with that. As it turns out investigators had found a letter at the scene of the crime and it had been addressed to Romero from Norma. Norma had basically called her marriage off in the letter and the fact she had also included her wedding ring to go along with it had made some believe that the letter indicated what happened at the house was her fault.

Yet, Romero knew the truth. He knew that his wife had been upset with him because he had tried to warn her about how dangerous her son Norman was. So Romero felt like the letter could have been just another moment of hers where she would need time to calm down. And even if it wasn’t like that, he indicated that he still wouldn’t believe Norma would kill herself because of one argument with him.

And Romero ended up kicking up a lot of fuss just to get someone to look at Norman. But thankfully that drew some attention and a detective stopped by the house to talk to Norman. Norman had been in the middle of destroying Romero’s TV so he was already coming off as unstable when the detective arrived and it only got worse from there. Norman had begun talking about the way Romero manipulated his mother into locking him away and that all Romero wanted to do was come between them. So naturally that set up some alarms bells and the detective promptly got out of there.

Though not before the detective got a chance to see Norman unravel. Norman has this way were he talks about his mother as if she’s still alive and therefore still has an opinion. So he went on to do that again with the funeral director. Who had initially thought Romero would take part in Norma’s funeral planning, but was left surprised when Norman vehemently claimed that Romero would have nothing to do with the funeral nor was he allowed to attend seeing as they had only been married for two weeks.

So Norman’s creepiness was finally coming across to others and it didn’t help that a witness at the funeral home later spotted Norman forcibly removing his mother’s wedding ring off on her finger. The one that Romero had snuck back on because he wanted his wife to have his mother’s ring. However, Norman didn’t care about the sentimental value of the ring. He had just wanted to erase Romero’s presence from the life he had with his mother as well the future he convinced himself that he still has with Norma.

Norman had come to believe that Norma was still alive because he refuses to accept that she could ever leave him. Even if it were in death. So he had another episode where he could have sworn his mother woke up at the funeral mom and blinked him. As if she only wanted him to know that she was alive and not anyone else. And so Norman didn’t bother to tell his brother that their mother had died – he felt like Dylan could no longer be trusted with that type of secret.

And in the end Norman also chose not to tell anyone that Norma was dead. He just had the funeral director and the priest there though the director’s son hadn’t been the only last minute addition. Romero had also showed up and it seems he had wanted to pay his respects. Yet, Norman put a stop to that when he had given Romero his ring back and that had led to them starting a fight right in the middle of the service.

But while that fight caused Romero to later be thrown out of the ceremony, he had gone right to the sheriff’s office and had tried to get his gun out of the safe so that he could use it on Norman yet he had ultimately been stopped by the feds. He had sworn to a federal agent that he didn’t have a relationship with Rebecca and sadly there was a recording proving differently. So Romero got charged with perjury because of that one little lie.

Meanwhile Norman was free to do as his pleased now that there wasn’t either Romero or Dylan around to ask questions. So what do Norman do with his newfound freedom? He went by the grave and dug up his mother so that he could take her back to the house. And be a family again. Albeit a murderous one.