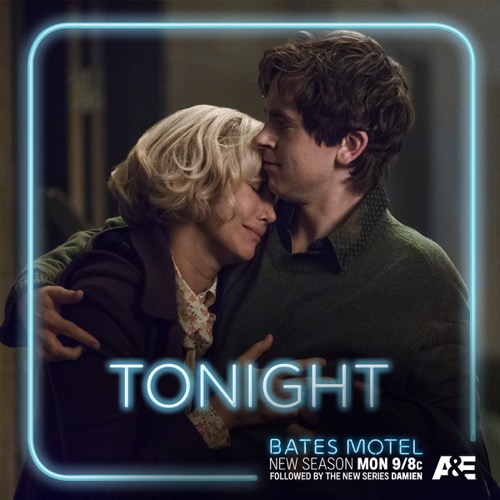 Bates Motel airs tonight on A&E with an all new Monday March 14, season 4 episode 2 called “Goodnight, Mother” and we have your weekly recap below. On tonight’s episode, Norma (Vera Farmiga) and Norman (Freddie Highmore) face off as they suspect each other of horrible actions; Dylan (Max Thieriot) thinks about his future with Emma. (Olivia Cooke)

On the last episode, in the fourth season premiere, Norma searched for Norman; Dylan awaits news on Emma; and Romero got a surprising proposition. Did you watch the last episode? Did you miss it, we’ve got a detailed recap right here for you.

On tonight’s episode as per the A&E synopsis, “Norma and Norman face off as they suspect each other of horrible actions; Dylan thinks about his future with Emma; and Romero makes a choice that will have a big impact on the Bates family.”

Tonight’s episode is going to be a great one and you’re not going to want to miss it. Bates Motel airs on A&E at 9:00 PM EST, while you wait for our recap hit the comments and let us know how excited you are about the season 4 episode 2.

Norman Bates is sick and there could be no doubt about that. However, Norman had steadily grown used to hiding bodies and he’s managed to do so again on tonight’s episode of “Bates Motel” with Emma’s mother. That may or may not have been actually dead when Norman put her in the freezer.

Though Norman had been pretty sure that the older woman was dead when he began “recalling” seeing his mother who put a body down there in the basement. So he had gone to see it for himself after Norma had left him alone a few minutes to clean up one of the motel rooms. Only he hadn’t seen a body in the freezer and therefore he had waited around for his mother to come back to the house.

Just so that he could warn her that next time she really should let him handle the bodies. That way he can do a better job at cleaning up than she can. Yet, Norman had shocked Norma when he said that. She hadn’t thought that Norman had noticed their client and she had been upset to find out that he had. And that he probably killed someone else without remembering it.

So Norma had later renewed her efforts to get her son into that all exclusive mental facility however they kept giving her the run around. They said they had a waiting list and that she was going to need insurance just to be consider. Though she didn’t have insurance and her one plan to get some had gone up in smoke.

And that’s why Norma was at her wits’ end when Romero showed up at her front door. Apparently he had felt bad about turning her marriage proposal so he had wanted to apologize for that, but he also wanted to know why she was so desperate to get Norman into Pineview. So he asked her if she was worried because she felt either her life or someone else’s was in danger?

Norma, though, said no. She knew what her situation was yet she hadn’t wanted to tell Romero about Norman and his problems. And thus she tried to find a way to get rid of him as fast as possible in order to find the place where Norman put the latest body.

Only she couldn’t find it. First she had checked the pit outside and she had found a glove in there that must have belonged to someone. Yet there was no body and unfortunately Norman caught her in the pit. So that had led to questions.

Norman wanted to know what she was doing there and he hadn’t honestly bought her excuse in which she claimed that she wanted to check the water levels. Therefore, he later asked her to go into the house while he dealt with a new family checking in. And he told her to stay there because he had to protect her.