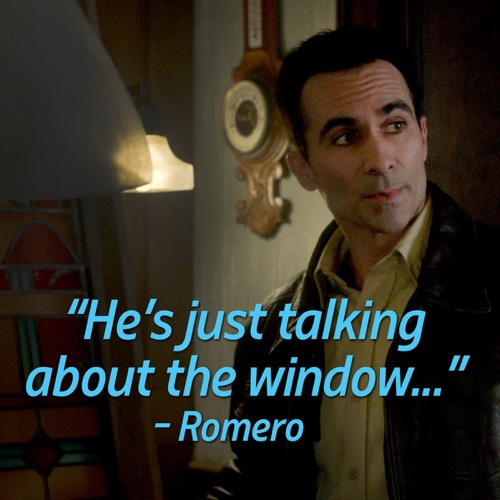 Bates Motel airs tonight on A&E with an all new Monday April 25, season 4 episode 7 (4.7) called “There’s No Place Like Home” and we have your weekly recap below. On tonight’s episode, a chance discovery spurs Norman (Freddie Highmore) to return home.

On the last episode, Norman dug into his past and confronted some painful truths; Norma tried to hide a secret of her own; and Romero put his career at risk to help an old friend. Did you watch the last episode? Did you miss it, we’ve got a detailed recap right here for you.

On tonight’s episode as per the A&E synopsis, “a chance discovery spurs Norman to return home; Norma dives into new projects with Romero’s help; and Dylan searches for Emma’s mother, but has troubling results.”

Tonight’s episode is going to be a great one and you’re not going to want to miss it. Bates Motel airs on A&E at 9:00 PM EST, while you wait for our recap hit the comments and let us know how excited you are about the season 4 episode 7.

Norman blacked out after his last session with Dr. Edwards. So he had no recollection of what happened when he let “Norma” out or what “Norma has been trying to protect him from. However, the good doctor was hoping that he could change that on tonight’s episode of “Bates Motel” because Dr. Edwards has come a long way just to get Norman to admit he was sick yet it appears that his endgame had always been to get Norman to confront his inner demons. And he would have liked to get rid of the other “Norma” altogether

But unfortunately something got in the way of progress. Norman had found out that Norma had gotten remarried and hadn’t told him. So he called her to see if she would finally admit to him what she had done and instead she chose to lie again. She said that there was nothing new to report and that Romero had answered the phone because he had been stopping by. And not that he now lived there.

So Norman who was feeling more than a little hurt and betrayed had then told his mother that he was coming home. He said that he voluntarily signed himself in and that should be able to voluntarily sign himself out. Yet, that wasn’t the case at Pineview. He actually had to write a letter for why he wanted to leave and then give the facility at least seventy-two hours to review his case. And they would decide if he should be released.

And part of their process in deciding that would be whether or not Dr. Edwards sign off. So that admittedly put Dr. Edwards in a tough position. He only recently won Norman’s trust and yet Norman’s demands suddenly put them at cross-purposes. Norman thought he should be released and Dr. Edwards disagreed to such an extent that he was willing to look into filing an affidavit with the courts. That would state Norman was a danger to himself as well to others.

Though a lot of people have figured that last part out on their own. Norman has killed countless time in the past and his latest victim was Audrey. As in Emma’s mother that both Emma and Dylan were looking for. So Dylan who had just found out that Audrey had stopped by the motel – had finally decided to start asking the right sort of questions.

Only he asked the wrong person. Dylan had taken the letter he had found in Norman’s room to Norma and he asked her if Norman had done something. However, Norma was never going to admit to that and she accused Dylan of making accusations about his brother that were simply not true. So they argued about what Norman was capable of though they both admit that it would be better if Norman stayed in Pineview.

Norman however didn’t wish to stay in Pineview. He’s been having dreams again and they were of his mother undressing for Romero. So Norman thought it was imperative he goes back home and he refused to listen to reason. Even if it was coming from Dr. Edwards and his friend Julian who later told him that people don’t get dumped at Pineview unless they fully deserve it.

So whether Norman wanted to admit it to himself, he was sick and everyone around him could see it. Most especially his own mother. Norma had later gone to Pineview to talk things over with Dr. Edwards and she seemed to be on page with the therapist when she said that Norman should stay in care. But she didn’t think she should petition the courts because she didn’t want to be the bad guy.

And so Norma thought she could merely talk Norman into staying on at Pineview. Though she hadn’t known that her son knew about her marriage and therefore she hadn’t expected that Norman would use her lies against her. To guilt trip her into letting him come back home. So it doesn’t matter what Norma’s original intentions were, Norman eventually got her to say that he could home.

Norman though couldn’t wait to be celebrate. He had gotten the doctor to give him medication for his blackouts. So that had made him think that he could be fine and that he wouldn’t have anymore problems with what happens during his blackouts. Yet, his final conversation with Dr. Edwards had been very telling. He had told Dr. Edwards that he needed to be around Norma who made him feel complete and that he would always be early for his follow-up appointments with the doctor himself, but it hadn’t been Norman that said all those things.

It actually had been his other personality. So it was the other “Norma” that got Norman out of Pineview because it had been her that talked the doctor into signing his release papers. But Dylan had sadly put all of his ideas about Norman to rest on tonight’s episode. He had found out that Audrey ran out on her rent and that she hadn’t paid any of her bills so he had tried to tell Emma that he thinks something bad happened when she thought something entirely different.

Emma said that her mom used to be in and out of her life when she was younger because she had always been looking for money. So that’s why her dad had gotten fed up and told Audrey to just keep away. However, Audrey would still try something. And that’s what Emma thought had happened again after Audrey “disappeared” before she could pay any of her bills.

So poor Emma dismissed her mother right off the bat and in the meantime Audrey’s killer was getting released from Pineview.

And managed to get in the way between Norma and Romero before he could even come home.