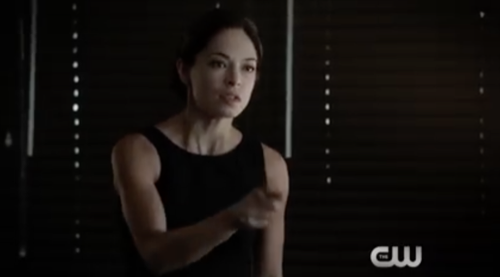 Tonight on the CW their hit fantasy drama BEAUTY AND THE BEAST airs with an all new Thursday, July 21 season 4 episode 8 called, “Love Is a Battlefield,” and we have your weekly Beauty and the Beast recap below. On tonight’s episode, Vincent (Jay Ryan) goes undercover with an operative whom Cat (Kristin Kreuk) learns is an assassin.

On the last episode, Vincent and Cat regrouped in their effort to bring down the beast hunters. Did you watch the last episode? If you missed it, we have a full and detailed Beauty and the Beast recap right here for you.

On tonight’s episode per the CW synopsis “Vincent goes undercover with an operative whom Cat learns is an assassin; and Cat tries to prove to DHS that she can still be trusted.”

Vincent and Cat’s great plan was apparently falling apart on tonight’s episode of “Beauty & the Beast” however they had no one to blame for that but themselves.

Vincent and Cat had seemingly underestimated the people that they were working with. They had thought that their plan was so easy and that all they had to do was make it look as if they both disavowed each other in order to get the others to trust them. However, they had blatantly underestimated a federal agency whose job it was to be suspicious as well a shadowy organization that had managed to stay in power without anyone questioning their methods. So right away their plan of pulling the wool over everyone’s eyes began to fall apart. Vincent hadn’t been trusted by people that were essentially mercenaries for hire and Cat had been kept in the dark about what was happening with Vincent’s case though Cat who wan eternal optimist thought she could somehow turn it all around.

Cat believed that the reason she had been kept off the case was because DHS had ordered a new heavy-hitter to come in and take cover from Special Agent Morgan so she thought that she could simply appeal to the other woman to allow her back on the case. Though it turns out Special Agent Olivia Dylan didn’t really care if Cat was concerned about her husband’s safety. And had told Cat that it was because she was too emotionally attached to the case that she couldn’t be trusted to make a decision out in the field. So Cat wasn’t going to get anywhere with Agent Dylan until she proved herself.

And the same went for Vincent and Greydal. Greydal wasn’t just any old private security firm. It was an organization that had many ties with those in power and so that had allowed them to carry out somewhat illegal missions without anyone questioning it. Like the bounty on Vincent’s head for instance. It had been Greydal that had accepted the bounty on Vincent’s head not once, but twice and no one bothered to question them when someone tried to kill Vincent. Or when an armed force attempted to kill both a police captain and also a DHS agent. So Greydal wasn’t going to risk the good deal they had going by putting someone like Vincent quickly out in the field.

Vincent had been great in training and the fact that his face was often plastered on the news as a wanted man had made him look like he could be trusted. But Vincent was still married to a DHS agent and his sudden interest in wanting to be a mercenary was suspicious. So Vincent had found himself about to be sidelined another one of Greydale’s shadier business deals when he decided to get into contact with JT. JT was still unemployed and lacking a social life so he had been in prime position to act as a go-between for Vincent and Cat.

Vincent had managed to literally knock out his competition. So he had called JT because he wanted JT to tell Cat about a passed out Greydal agent by the dumpsters. Vincent had said that if she could come up with charges to keep Nathanson out of the way then he would be one step closer to figuring out what Greydal was doing and so the first time Cat had heard from her husband since they put the plan into action was JT telling her about Nathanson. Though not so surprisingly, Cat didn’t like being in the dark about what Vincent was doing or who Nathanson could be. And so she’s been expressing some of her frustrations with her willing audience like her friends and family.

Tess and Heather had heard every complaint that Cat had. Yet, they think that the lengths that Cat and Vincent are going through are slightly ridiculous. So they had seen the flaws in the “plan” and they had questioned whether or not it will actually help them have a normal life after everything was over however Cat’s complaints weren’t anything new. She’s been complaining about the secrecy and not being able to see Vincent whenever she wanted since the two first got together. And by now it’s getting tiresome if not hurtful.

Heather was lying to her boyfriend while Tess was recovering from her breakup with JT and trying to date again. So while the two were sympathetic to Cat’s face, Heather later stopped by JT’s place to talk about his feelings for Tess. Heather believed that JT still cared about Tess and wanted to be with her so she had decided to warn him about Tess’s date with a new ADA. Heather thought that if she warned him in time that he would find a way to stop it. However, JT never got that chance because he had been busy helping Cat and Vincent. DHS had apparently sent a drone after Vincent so now Vincent working for Greydal was no a longer secret.

And so DHS had tried going after Vincent while he had been finally allowed on a mission. The mission, though, was a complicated job that had a partner. Vincent had been sent to work a charity event with a woman wanted by Interpol and unfortunately they had to act a married couple as part of their cover. So the drone had picked up pictures of the two kissing and that’s how Cat also found out that her husband was nearby. But even as she raced to the scene and stopped Vincent’s crazy partner from killing Agent Dylan, Cat and Vincent still had a lot to work through once everything else calm down.

Cat felt that she and Vincent weren’t talking as much as they used to. So she felt that their communication off and that’s what was making their situation worse however, later working together did have its drawbacks. Cat had won the respect of Agent Dylan who allowed her back onto the case after she had saved the other’s woman life. Yet, Cat’s was barely in Agent Dylan’s good graces when she went rogue again. Cat had followed Vincent again and then she had to cover for him when he found himself in some trouble with his partner Diane. Diane had wanted to test whether or not Vincent was committed so she asked him to kill someone. And Vincent had a hard time with following through on that.

So instead Vincent chose to fake it and Diane would have killed him for that if Cat hadn’t stepped in to kill Diane!

But a dead partner didn’t go over so well at the “private security firm”. They had felt suspicious about Vincent and his story while Agent Dylan had seemingly gotten the proof she needed from a security guard that Vincent almost killed him. So all that progress they made in getting put on the case and trusted with missions, was quickly going down the drain because of their need to do these things together. And frankly there didn’t seem like there was going to be a happy ending for these two.