Beauty and The Beast Recap – Braxton The Real Enemy: Season 4 Episode 12 “No Way Out” 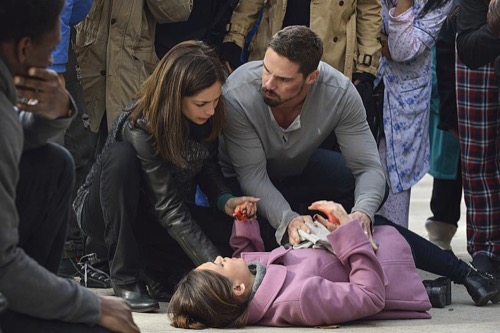 Did you watch last week’s episode where Vincent (Jay Ryan) and Cat (Kristin Kreuk) faced the fact that they had lost control of their secret?  If you missed the episode we have your The Beauty and The Beast recap for your enjoyment, right here.

On tonight’s The Beauty and the Beast episode as per the CW synopsis, “Cat (Kristin Kreuk) and Vincent (Jay Ryan) face a huge setback when Vincent is secretly interrogated about an impending attack, putting Vincent at his breaking point.”

Tonight’s episode looks like it is going to be great and you won’t want to miss it, so be sure to tune in for our coverage of CW’s Beauty and The Beast at 9 PM – 10PM ET! While you wait for our The Beauty and The Beast recap make sure to head over to check out our BBTB recaps, spoilers, news and more!

Cat and Vincent were in quite a predicament on tonight’s episode of “Beauty and the Beast”. Cat’s sister Heather had apparently been a little too careless when she stole the identities off of two dead victims for her Cat and Vincent’s fake passports. So it had actually been Heather’s boyfriend Kyle that had found out what she was doing and had turned her sister and brother-in-law into DHS. But DHS unfortunately, has the wrong of the end of the stick when it comes to Cat and Vincent. And therefore they don’t think either Cat or her husband should be allowed out of jail.

Cat’s former boss and the current acting DHS agent on Vincent’s case had gone to see Cat in prison and someone seems to have poisoned Agent Dylan. Dylan for some unknown reason at the time had thought that Vincent had killed all those people that the other beast did away with. So she thought that Vincent was targeting people because he was working his way up to something and she thought that something might have something to do with domestic terrorism. However, Cat had very quickly defended her husband when she said that he wasn’t a terrorist nor was his planning an assault so Cat didn’t really think that DHS could keep Vincent in jail with the Patriot Act.

Yet, the way things were unravelling had later changed Cat’s mind about what DHS could or could not charge her husband with. Cat had been eventually released from prison on bond and the first place she went to was her old precinct. So Cat had gone straight to Tess and she had wanted to find out what Tess. Tess, though, didn’t have any good news. She said she heard that Vincent was a suspected terrorist and that there was going to be some kind of attack. And so that meant DHS were completely serious about Vincent and that they were not just adding on charges because of what happened to Hill.

So JT and Heather had tried to get Vincent out of prison like they did with Cat when they hired a lawyer for her yet they couldn’t find him because he hadn’t been publicly registered in any prison. Vincent had actually been taken to an off the grid site where the people that were “questioning” him about his alleged involvement in terrorist attacks had taken preemptive action against him by surprising his beast gene. Though how they knew about Muirfield and nothing else like how Muirfield killed hundreds of people just to cover up what happened to Vincent wasn’t clear until later. Which was when Cat and Tess broke into an apartment.

Cat and Tess had kept their ear to the ground and they had found out that DHS had raided what they claimed was Vincent’s second apartment. So Tess snuck into Dylan’s DHS headquarters and she found out where this second apartment was. But the second apartment had been a perfect ploy. It had looked as if Vincent owned it and that he was making moves to target someone else however it was mostly vague meanderings up on a blackboard and had no details on who the apartment really belonged to. And so that apartment had been carefully constructed to frame Vincent because he had been the only other beast around.

And this other beast was good. However, that meant Cat didn’t know what to do next and eventually she had needed to vent. So she left the apartment to go visit her mother’s grave and, against her wishes, her sister followed her. Heather had apparently wanted to apologize again for what Kyle did because she blames herself for what happened to Cat and Vincent though Cat didn’t feel the same. Cat had told Heather that it wasn’t her fault and she had made it clear that it wasn’t Kyle’s either because Kyle had merely been trying to protect Heather from Vincent.

So Cat had made her sister let go of some of that anger and in return Heather told Cat that she needed to forgive their mother. Their mother hadn’t known that her research would lead to the Super Soldier Program or the deaths of so many people so Heather didn’t want her sister to stay angry at a woman that wasn’t around to defend herself. Yet, Cat stopped being angry at their mother quite a long time ago and she was angrier at herself for what happened. Cat had unfortunately dragged her feet when it came time to run and so she feels like everything they went through had been for nothing if it was going to end in with Vincent in prison.

Though Cat didn’t have to worry about Vincent because he managed to escape his underwater cell all on his own. Vincent had been having a hallucination at the time where he thought he was seeing his wife. So he and the version of Cat he had created in his mind had both gone over his case and they tried to find out who would set him up. And the conclusion that Vincent came to before he began broke out of his cell in a furious rage was that there wasn’t a second beast, there was just Braxton.

Braxton had been the one that warned them about a second beast out there before he was arrested and allegedly mauled to death. But Vincent had remembered a conversation that he had with one of Braxton’s accomplices before that man died and he recalled Braxton’s friend stating that they had to shut down the second Super Soldier Program because there had been an investigation into them. So that put a few pieces together for Vincent and he then knew why Braxton had come looking for him to begin.

Vincent later told his friend and family that Braxton must have created the myth of there being a second beast to kill off everyone that could testify against him in a proper investigation. However, to truly sell that version of events, Braxton had needed an actual beast. So that’s why he put a bounty on Vincent’s head and the whole terrorist attack thing must have been Braxton only way to kill off his last partner without anyone knowing he was alive. The last partner though was pretty hard to get close to.

The fourth and final partner of the cabal had been a Crown Prince of Middle Eastern country and the only way Braxton could even get close to such a man without revealing himself was to plant a bomb. So Vincent and everyone went looking for Braxton. Yet, Heather was the one that ended up finding him. Heather had seen Braxton outside of the building that Vincent and Cat were in so she tried following Braxton and sadly Braxton saw her. And shot her to keep her quiet.

Heather was now fine and she was going to fully recover from the gunshot however there was still a bomb out there and Vincent was believed to be responsible.