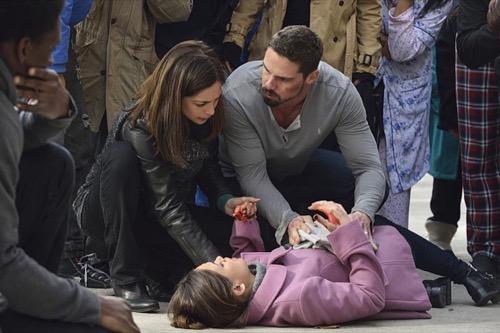 Did you watch last week’s episode where Cat (Kristin Kreuk) and Vincent (Jay Ryan) face a huge setback when Vincent is secretly interrogated about an impending attack? If you missed the episode we have your The Beauty and The Beast recap for your enjoyment, right here.

On tonight’s The Beauty and the Beast series finale episode as per the CW synopsis, “Vincent (Jay Ryan) and Cat (Kristin Kreuk) are willing to make the ultimate sacrifice to stop an attack and rid the world of beast makers once and for all.

Cat and Vincent were getting their affairs in order at the start of tonight’s episode. Apparently, the couple had come to realize that there was no returning to normalcy after everything that happened so they were still going to run however they knew they had to cover themselves this time around. So Vincent had made sure that they had a getaway car when he bought one for an all cash offer while Cat paid a long overdue visit to her bank. Where she finally got her money situation sorted out and took out just enough for her and her husband to start over somewhere new. And therefore the couple were getting everything they needed to run away again.

However, the only reason why they simply didn’t just leave town as fast possible was because neither of them could stand by as Braxton set Vincent up for another crime. Braxton was recently revealed to still be alive and unfortunately he had made people believe he was dead because he wanted to blame all of his actions on Vincent. Such as killing all of his former partners and everyone that had a hand in the beast program. So the fact that Vincent was a beast himself helped further Braxton’s narrative because DHS could more believe that Vincent couldn’t control his bestial self than the actual truth. Which was that they had been duped!

So with DHS as well as every other governmental organization automatically against them, Cat and Vincent couldn’t turn to anyone but their friends for help. The couple needed help stopping Braxton and they knew that Braxton was going to be targeting Crown Prince Sheikh Abu. Though stopping a bomb from going off and killing hundreds of people at the UN was going to be hard for anyone much less their friends. JT had sadly sold most of his computer equipment to get Cat the money she needed for her lawyer so his skills were rather limited without such big toys. And as for Tess, she also found herself short-changed when she found out that her badge couldn’t get her information she needed on the crown prince.

It was something about national security and crap like that. So both Tess and JT had to resort to bugging DHS Special Agent Dylan to find out what she knew and, because Heather wanted to help out as well, Heather had tried to add to the couple’s necessities by getting them what she thought were workable disguises. But Heather’s boyfriend Kyle had wanted to win back her trust so he offered to help and had gone around town with her looking for wigs and anything else that Heather thought was pertinent. And so Heather had gone running to her sister afterwards hoping that she could give her the disguises in time yet she forgot all about everything including her own hard work when she saw a lawyer in her sister’s living room.

The lawyer had clearly been helping Cat with her Will so that had made Heather incredibly angry because she thought she had been helping her sister with her happy ending however, finding out that Cat was preparing for an eventuality after her death made everything seem final. As if Cat knew that she wasn’t going to be making it out of her latest situation alive. So Heather eventually asked her sister about the will once she had calmed down and Cat had fobbed her off with something story. Like how she wanted to get all her ducks in a row when at that same time Vincent was across town giving JT a brand new laptop.

That laptop that Vincent had given his best friend had been quite expensive and it usually wasn’t something that a person could afford if they were about to go on the run. So that had made JT naturally suspicious of Vincent. JT as it happens had sensed that something was off with the way Vincent and Cat were saying goodbye and, like Heather did with her sister, he questioned why Vincent was acting as if he was never going to see him again. However, he too had been fobbed off and had simply been told that he was loved and that nothing was ever going to come between them. And so no one had known what was up with Cat and Vincent yet the fact they didn’t communicate with each other meant they didn’t put the pieces together fast enough.

Everyone had apparently been told the plan though the plan was to drive the bomb that would most likely be put on the crown Prince’s car into the ocean and so the others had just thought that Vincent would do what he normally does. Uses his beast skills to do what other men could not. Yet, that’s not what happened or to say it clearer what looked to have happened. Instead, Vincent and Cat were able to do the first part and convinced the Crown Prince to trust them. So it had been them in the car like they plan and everything had gone wrong after Vincent and Cat had still been in the car when they drove the it off the bridge and they had been stuck inside as it exploded.

So Vincent and Cat’s friends and family did believe that the two were dead. Though to avenge what they believed happened to their friends, JT and Tess went out and found Braxton before anyone else could. And they delivered their own justice!

But later things became clear. Vincent had seemingly set up a job offer for JT and he had told the guy that would be making the offer that he should look for JT at his own funeral. So that had made JT and Tess suspiciously hopeful about Vincent and Cat being alive though the fact Heather hadn’t been able to find any of the disguises she bought for the couple at their apartment had been enough to convince her. And so Heather had gotten into contact with JT and Tess and all three spent the next couple months looking for where Vincent and Cat were hiding.

And eventually found them in Paris.

Still being very much themselves!