Bella Hadid Flirting With Mystery Man: Cheating on The Weeknd In St Barts? 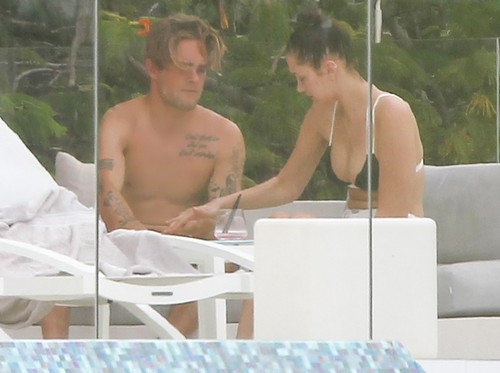 Was Bella Hadid flirting with a mystery man while vacationing in St. Barts on April 1? Is Bella cheating on her boyfriend The Weeknd?

Bella Hadid and The Weeknd were happy and smiling while posing for photos at the Daily Front Row Fashion LA Awards last week. Bella Hadid even shared a pic on Instagram of the red carpet event and the couple appeared to be very much in love.

Now Bella is vacationing in the sun, laughing and holding hands with another man? Is there trouble in paradise? Sometimes absence does not make the heart grow fonder. Both Hadid and The Weeknd have successful careers that often keep them apart. Somehow the couple has managed to make things work – until now.

Has The R&B artist been so wrapped up in work and the release of his remix of Bryson Tiller’s Rambo that there just hasn’t been any time to spend with Bella since the Daily Front Row Fashion LA Awards?

It’s possible that flirting, holding hands and laughing with some other guy is a drastic measure Bella Hadid has taken to get her boyfriend’s undivided attention.

On Wednesday, March 30 The Weeknd issued a statement that there had been some kind of unforeseen changes and he wants to focus on upcoming projects rather than go on tour. That’s the same day the singer dropped Rambo on SoundCloud.

Did The Weeknd back out as of Rihanna’s Anti World Tour at the last minute because of Bella? The musician was set to open for Rihanna on the European stretch of her world tour.

Is one of those projects finding more time to spend with Bella? The relationship does appear pretty serious. But if Bella Hadid is enjoying the company of another man while on vacation in St. Barts things could go south very quickly.

Bella is only 19-years-old and her boyfriend is 26-years-old. Maybe things got too serious too fast and The Weeknd is ready to settle down and Bella isn’t ready for that much of a commitment. Guess we’ll just need to wait and see what happens next.

Are Bella Hadid and The Weeknd headed for a breakup or has the couple already parted company? Is that why Bella was seen flirting and holding hands with a mystery man?

Bella Hadid was spotted smoking and hanging with friends at a private house in St Barts on April 1, 2016. She was seated next to a mystery man and the two flirted with each other heavily, laughed, and even held hands. FameFlynet