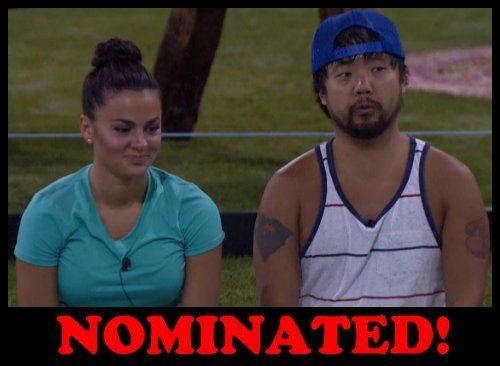 Tonight on CBS Big Brother 18 returns with an all-new episode and we have your Big Brother 18 recap below!  On tonight’s episode, the HoH competition picks up where it left off last week and a new HoH is crowned.

If you missed last week’s episode where the votes for eviction were tied evenly between Michelle & Victor and Nicole had to cast the tiebreaking vote, she voted for Michelle to be evicted  we have a full and detailed recap, right here for you!

On tonight’s episode as per the CBS synopsis, “The Head of Household competition is completed and a new HOH is crowned.  The new HOH will nominate two houseguests for eviction.”

#BigBrother18 picks up on Live eviction night prior to the vote. We see some talk prior to eviction with Nicole talking to James and Natalie. Nicole says Paul has talked to her and Meech has not talked to her at all. It’s trouble in the #BB18 house.

James is upset that Nicole and Corey seemed to have flipped without warning them. Natalie tells James that working with Nicole and Corey was a mistake and they’re going to come after them now. Corey confirmed for Meech she’s likely going.

Corey says he’s team Michelle but has to have Nicole’s back and do what she wants. Nicole comes inand doesn’t look happy at the conversation. Michelle says they should target Victor and Paul and split them up. Nicole says this is strategic.

Corey throws Nicole under the bus

Nicole says Michelle should have come to talk to her this week. Nicole says she has to do what Corey wants after Corey walks out and Meech says Corey said he was open to it. Nicole says she doesn’t like Corey blaming her.

Nicole calls Corey into the room and says you made out like this was totally my decision. Corey says it’s a game decision and Meech cries and says she’s not a threat to them and this decision is crazy. Then we flip back to the HoH comp after the Live eviction.

James feels betrayed and hopes he or Natalie can win the comp. Victor says in Diary that getting the egg down to the spot is hard enough and he’s frustrated when his egg lands in front of the O but doesn’t topple the letter.

The HoH comp is “egg”citing

Then the birds start flopping down on them and trying to break their eggs. Paul curses repeatedly and says this comp is literally impossible. Corey says there’s a pattern when the eagle comes down for the eggs and he works up a strategy.

James tries rolling his egg along but loses control and it breaks. There’s also the spot where you can put an egg in the slot to prevent yourself from being a Have Not. Nicole isn’t pleased that he did that instead of trying to win HoH.

The houseguests make awful egg puns and Victor finally knocks over a letter – he’s the first to knock one down. Natalie also knocks one over and is excited. Corey then lands a letter too and the three are neck and neck more than 30 minutes into the comp.

Paul finally lands a letter too – they each got an O since it’s the easiest of the three letters. It’s an hour into the comp and Natalie says it’s “eggs”austing. Victor is frustrated and Corey knocks over his second letter. He takes the lead with an O or H.

Victor also gets a second letter and he’s tied with Corey. Natalie makes it a three-way tie when she knocks down her second letter too. James has zero letters and is sucking bad at this comp. Corey is worried that Natalie will win and he tries to pick up speed.

James cracks egg after egg and Paul is pleased that he sucks at this comp. Natalie encourages him but it doesn’t help. Corey can’t land his third letter. Nicole is freaking out as the guys keep rolling and missing. Paul can’t land his second and Victor is still struggling with his third.

HoH comp continues with Nicole “egging them on”

Paul gets his second one to make it a four-way tie. James finally knocks over one letter. It’s close to two hours into the comp when Victor finally knocks down the third letter. He takes aim at his other H, knocks it down and takes the comp win.

Victor is thrilled and screams and grabs up Paul in a big bro hug then he goes and grabs up Nicole in a big hug. He’s so happy that he and Paul are safe. Paul runs and jumps into Victor’s arms and they celebrate. Natalie is worried and so is James.

James knows immediately that he and Natalie are probably going up on the block. Victor heads into the Have Not room and calls himself unevictable. Corey comes in and they do a big bro hug. Paul runs in and they chest bump then Nicole comes in for a hug.

Victor tells them they all have to go balls to the wall to make sure James can’t win the veto and take himself off the block. James talks to Natalie while she’s showering and he says he thought for sure she would win it.

Natalie knows she and James are at risk over Victor’s eviction. They agree they will likely be put on the block together. Nicole says Natalie is pretty good at comps and Corey agrees she could win but Paul says with James gone, Natalie will crumple.

Nicole leaves and Paul and Corey talk about Meech and how sour she was when she left and how she stole Pablo when she ran out of the house. Paul is upset about it still and Corey says poor #Pablo lost his dad.

Victor and Paul celebrate their alliance

Paul and Victor discuss their #SittingDucks alliance in the pantry. They both know they’ve been targets since day one and how they went from the bottom to the top and will be final four with Corey and Nicole. They’re triumphant and braggy.

Paul, Victor, Corey and Nicole hang out and talk about their backgrounds. Nicole tells them how small her school is and that it had 64 graduates. They tease her about being from a tiny town and how small the class reunions must be.

Victor asks if there were just two of them in her yearbook and Paul says it was one page. The teasing continues and Corey asks how group projects went. Nicole calls them all jerks. Paul starts up again asking about the school play.

Natalie says this is happening because they betrayed Victor and Paul and says she took his advice when he told her to trust Nicole and Corey. James says they can’t cry over spilt milk. Natalie says he wishes they could have won the HoH.

Corey wakes in his sleep and starts mumbling about Harry Potter over and over before goes back to sleep. At least he’s not sleep walking tonight. After lights out, James and Natalie lie in separate beds and he says she doesn’t have to like him just because he likes her.

She says she does like him and then she says she doesn’t judge men by their looks. James says thinks. Natalie says she’s dated ugly and good looking guys but never an Asian guy until him. She says she can fall in love with any type of guy.

Corey again starts talking about “the game of Harry Potter.” Wow. He’s really a wackadoo when he sleeps. Nicole tells Corey the next day that he was cocky to go for the Have egg first off instead of playing harder for HoH.

Corey is confident in the Final Four alliance and says that James knows they’re working with them and they need to stay up in the HoH so James can’t make a play for Victor. But James is already up there and asks to talk to Victor.

James tells Victor and Paul that he and Natalie had a final four deal with Nicole and Corey and that’s why he voted to evict. Victor reminds him that means he betrayed him after he did the dirty work of getting Paulie out then he targeted him.

Victor says he was only loyal to him while it was convenient. James tries to save Natalie and says she didn’t want Victor to go home and James says it was his vote that sent him out. James starts to tell him Corey wanted him out but then Corey and Nicole come in.

The talk stops for now

Victor goes to get in the shower to encourage James to leave. He does. The final four talk. Nicole asks what James was saying and Paul says he told them that he and Nat had a final four with Nicole and Corey. Nicole says it wasn’t a real final four.

Nicole isn’t happy and tries to play dumb. She says they’re playing dirty and Victor says it doesn’t matter and they don’t have to explain it. Victor says it’s in the past since they kept him and Paul safe last week and Corey gave him the $5k bribe.

They tell Nicole that James is trying to protect Natalie and Victor says he wants James out. Nicole says those two play dirty. James tells Nat that he talked to Victor and tried to save her. Natalie says that makes her sick to her stomach.

James says he told Victor about the final four deal with the other showmance. Natalie says she can’t play this game without him and says he’s her best friend and soul mate. She puts her hood over her face and cries and James says they have to win PoV.

Victor calls everyone in to see the Nomination Ceremony. Unsurprisingly, he put James and Natalie on the block. Victor says he nominated Nat as a pawn and hopes she gets off the block this week. Victor says James sent him out of the house and he hopes he goes home.

That’s it. Natalie isn’t happy to be on the Chopping Block with her ride or die and says she doesn’t want to be in the house without him. Nicole wants to win the PoV to keep them there. Paul is thrilled and he also wants the PoV to not use it.

James isn’t happy that Natalie is on the block and feels like he’s the reason she’s there and he wants to win the Veto, use the Texas Code, and pull her off the block to try and make things right. Check out more CDL Big Brother 18 spoilers to find out who won the PoV.