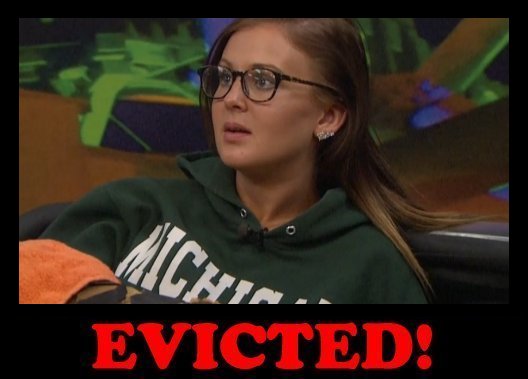 Tonight on CBS Big Brother 18 airs with an all new Thursday, September 1, season 18 episode 34 and we’ve got your Big Brother 18 recap down below! On tonight’s episode, another houseguest is evicted from the compound.

On the last episode, houseguests went head to head competing for the Power of Veto. Did you watch the last episode? If you missed it we have a full and detailed Big Brother 18 recap, right here for you.

On tonight’s BB18 as per the CBS synopsis, “a houseguest is voted out of the competition and evicted from the Big Brother house. Once the houseguest leaves the HoH competition begins and a new HoH is nominated”

#BigBrother18 tonight features the Week 10 LIVE eviction. Will it be Michelle or Paul that gets sent packing this week? The episode starts in the #BB18 house right after the Veto Meeting when HoH Nicole decided to leave them on the Chopping Block and not use her PoV.

Meech is not surprised that Nicole didn’t use it. She knows it will come down to Corey’s vote since Natalie and James will vote against Paul and Victor will vote against her. She also knows that Corey will do what Nicole asks. Paul is feeling confident about the coming eviction vote.

Corey considers using the #BBBribe to make sure Michelle goes out. Victor and Nicole talk after the Veto Meeting and she asks if he was scared she would put him up and pull Michelle down. Victor says he wasn’t worried and she says trust me and he hugs her.

Nicole tells Victor she trusts him too. In the London room, Paul tells Michelle that they are targeting the two craziest people and she asks if he knows who’s going. Paul says he has no idea. Natalie asks if they really don’t know and she says she doesn’t either.

They ask Paul if Victor knows and Paul says all he knows is that Victor will vote to keep him. Natalie says Nicole is a boring HoH and she’s just upstairs lying around with Corey. We see Nicole painting his nails. James admits to Paul that he and Natalie won’t vote to evict Meech.

Paul says he doesn’t know what Nicole really wants so it’s anyone’s guess what will happen. He’s doing a good job playing dumb. Victor plays interviewer and talks to Corey about his bribe Care Package. James reminds him it will expire and says give it to a “friend.”

James suggests he could use the bribe to get someone to drop out of the HoH comp. James makes it blatant that he wants the money to drop out. Corey wonders what is the catch. Corey says dropping out of the HoH is not a good idea.

Corey goes upstairs and tells here James wants the bribe. She says that would be a dumb move on James’ part and Corey wonders why anyone would throw a comp at this stage. He says it’s like giving up. Nicole says maybe James doesn’t want HoH so he can avoid blood on his hands.

Victor goes into the bathroom when Michelle is in there and it makes Nicole paranoid. Nicole tells Corey later she definitely doesn’t want Paul to go home and tells him she’s worried about Victor. Corey says he can offer Victor the $5k to vote Meech out.

Corey says he thinks bribing Victor is the best option and she agrees that it’s a good decision. Then she waffles at the last minute and he says stop playing Big Baby, let’s play Big Brother. James tells the girls that things are really quiet and Natalie tells James to go investigate.

In the HoH room, Corey chats up Victor and Paul and says he has news. He says he wants to solidify the alliance and offers him the $5k bribe to vote out Michelle. Victor tears up and is grateful. They hug it out then all four get into a group hug.

Victor is thrilled and says in the Diary Room, he feels like he’s in with a good group of people. Paul says it’s friendship. Paul says he thinks this Final Four is a super alliance and is the super friendship he’s been looking for all season long. Nicole says keep it secret and they agree.

James tells Michelle that she’s totally safe this week. He says the others are just upstairs talking about good times in life and tells her that Paul is definitely going home. Wow. Total denial. They haven’t even tried to find out what’s going on.

Julie chats up the houseguests and tells them there is no Double Eviction tonight and none for the rest of the summer. She also shows them video messages from home. Victor cries when his parents tell him they’re proud of him.

Corey’s family has his dog on their laps and he smiles. Nicole’s mom tells her she’s her best friend and misses her. Michelle’s parents give her a sweet greeting too and she smiles. Pual starts crying when his parents come on and they tell him he’s almost there.

Natalie’s mom says she has heavy duty DNA to meet her goals. She even has pom poms. James’ daughter is there and she blows her daddy a kiss. James says he really needed that. Julie asks Paul why he’s still crying and he says his parents are always on his case and he misses it.

Victor is the comeback kid

We see Victor and Paul talking about his evictions and how it might be driving his mom through a roller coaster of emotions. We see an interview with Gretchen, Victor’s mother, and she talks about their Puerto Rican traditions.

His mom says they pushed him to do athletic stuff and he’s very competitive. His dad’s name is also Victor and he says Victor is a great son and he’s very proud of him. He talks about how Hurricane Katrina affected them and so they sent their kids back to Puerto Rico for a while.

His dad says Victor won’t give up and he will always keep fighting. They talk about how nerve-wracking it is to watch him in the game. Victor says he’s proud that his son was smiling even though he got kicked out twice. Gretchen says Victor needs to watch out for James.

Paul says this is an emotional roller coaster and says he liked being a secret service agent and loved the friendship. He and Michelle have a little kiss then Michelle says if they evict her, she will bawl and if they keep her, she will target Victor and says he and Paul can win this.

That throws it to a tiebreaker. Julie tells the houseguests it’s 2-2 and Nicole must break the tie. Nicole stands and says they’re both great but she has to vote to evict Michelle strategically. Meech says she hopes the HoH goes after Victor and Nicole out.

Nicole says that’s exactly why she voted her out and Meech says Nicole is floating her way to Final Two. She also grabs Pablo, Paul’s inflatable duck on the way out. Nicole tells James that was exactly why she had to vote against her.

As Meech comes out, she tosses Pablo to the audience. It’s official. Big Meech is the Week 10 evicted!

Meech says she wanted to give her input on the way out the door and that’s why she called out Nicole. Michelle says Paul and Victor are big threats and she’s not good at physical comps. Julie asks about her not being a pawn this week.

Michelle says she was sure that Paul was the target so she didn’t really campaign and says James and Natalie encouraged her not to say anything. Julie asks about her calling Nicole a boring HoH. Michelle says Nicole didn’t talk strategically all week long – she had no idea…

Michelle says keeping Paul and Victor together is just dumb. Paul says on his video, he liked that she blew things up and says he’s going to blow stuff up for both of them. Victor says he didn’t want to see her gone and says he had to keep Paul but he misses her.

James says if she’s evicted, he’s blindsided. Nicole says she hopes she knows this is strategic and she can’t keep her when she called her out in front of the whole house. Michelle starts bawling and asks why she didn’t get to see Natalie’s video. Julie says at least she’s in jury.

The “Poached Eggs” challenge is a little different in #BB18. They have to move eggs up and over through wire, over to a ramp, and roll it down to knock down three targets that are the letters HoH. Also, the first three to put an eggs into the “Have” basket will NOT be Have Nots.

All five of them are wearing little fix ears and there are chicken noises playing constantly. Nicole watches the five-way battle since she can’t play in the comp. Julia tells the houseguests there are eagles that might poach their eggs.

Stuffed eagles slam down against the chicken wire and could cause them to drop the eggs or could break them. That’s it for the episode. Stay tuned to CDL tonight for Big Brother 18 spoilers for who won the Week 11 Head of Household comp.