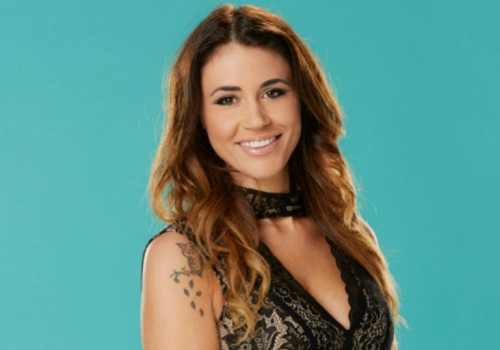 Big Brother 18 spoilers are unfolding as we get to know the BB18 houseguests. Tiffany Rousso is one of the two entrants to Big Brother 18 that is a prior player sibling. She’s the younger sis of BB17’s Vanessa Rousso. The other sib is Paulie Calafiore, big brother of Cody who was the BB16 runner-up.

If you watched Big Brother 17, you may remember Vanessa Rousso as the poker player who was a master strategist but was known mainly for her two-faced confrontations, secret (and many) alliances, blindside schemes and crying jags.

32-year old high school teacher Tiffany Rousso mentioned advice she got from her big sister on Big Brother 18 domination. Tiffany said Vanessa told her some things to avoid, to try, and what to watch out for on BB18.

When asked about big sis Vanessa Rousso’s histrionic crying jags, Tiffany said, “I’m definitely not going to be as emotional as she was. I agree she was pretty emotional and she will agree too.”

Tiffany also plans on trying to keep her identity as a prior houseguest sibling as long as she can. That makes sense because any baggage you come in with and the other houseguests discover can turn into fodder to target you for eviction.

Tiffany is hoping to channel Janelle Pierzina from BB6, BB14 and All Stars whom she called smart, with a good social game and, importantly, a “competition beast.”  Interesting that she didn’t name Vanessa as her BB role model…

Tiffany Rousso spilled in her cast announcement interview with CBS that she will have “three key facets” in her game play. She added, “I want to build rapport with everyone, be social and have one person I can trust until the end.”

She’s already thinking strategically and promised, “I will make people feel like I am on their side. I also hope to be great at competitions when needed. It’s all about timing. You don’t want to come out with guns blazing.”

Tiffany also said she hoped to align “loosely” with bigger threats but then let them be sent to the chopping block while she stuck around. That’s a good strategy but Tiffany also better watch out for the token geek in the house.

It was nerdy Steve Moses that took Vanessa Rousso out and won BB17. In a recent Twitter rant, BB8’s Evel Dick Donato offered advice for incoming BB18 houseguests and said to vote out the “social awkward geek” right away.

Is this advice that Vanessa passed on to her little sister since sweet geek Steve Moses evicted her? We’ll see who Tiffany Rousso targets first when she hits the BB18 house next Wednesday, June 22 as the new season premieres.

We’re also expecting more houseguests, but only 12 have been announced so far. Many Big Brother 18 spoilers promise returning houseguests to stir up trouble but no names have been confirmed yet.

BB18 spoilers tease that Derrick Levasseur, the Rhode Island cop who won BB16, and BB14 winner Ian Terry might return as coaches. As of now, we’re expecting at least four returning players to round out the cast.

Stay tuned to CDL for all the latest Big Brother 18 spoilers and news.