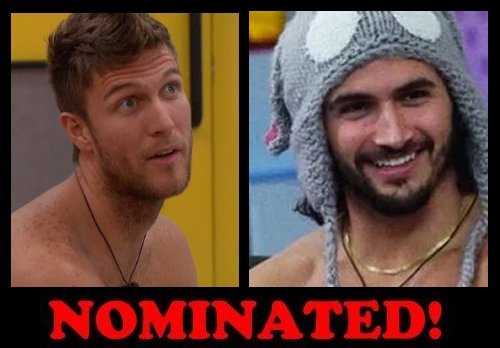 Brand new Big Brother 18 spoilers are in for the BB18 Week 9 Veto Meeting and Corey is now on the block alongside Victor. Co-HoH Michelle put Corey on the block although she had been more inclined to nominate Nicole based on her earlier conversations with Natalie.

Heading into the BB18 Week 9 Veto Ceremony, Michelle tried to win Natalie over to the idea of putting Nicole on the Chopping Block. Big Meech told Natalie that Nicole had flirted with James early in the Big Brother season but it’s not clear if that’s true or not.

But even given the jealousy factor, it seemed like in the wee hours of this morning, the target had moved to Corey because he’s a much bigger comp threat target than Nicole. So at the Veto Meeting held earlier today, after Paul used his PoV to get himself off the block, Michelle renommed Corey.

So now, going into the Week 9 Eviction Vote, comp beasts Victor and Corey are side by side on the block. Coming into Week 9, after Michelle was awarded co-HoH from America’s Care Package, she wanted to break up the Nicorey showmance.

But Big Meech hit a wall of opposition with Natalie and James who wanted to break up the power pair of Victor and Paul instead. But with the choice of renoms narrowed down to James, Nicole and Corey, with James being an ally and Nicole and Corey being the two, Corey makes more sense.

Going into the Eviction vote, there will be Nicole, Paul and James voting. Nicole will definitely vote to evict Victor. Paul is Victor’s ally, but he’s also known not to go against the house so while he should vote to evict Corey, the bottom line is it will come down to James’ vote.

If James sticks with the alliance of two showmances, he’ll vote to evict Victor. The plan seems to be to let Victor think that Corey was their blindside target but then the vote will blindside Victor. Of interest is that no one in the BB18 house knows there’s another Jury Buyback coming.

What do you think BB18 fans? Do you think Victor will be sent out of the Big Brother 18 house as the Week 9 evicted? If so, it’s not likely to be much of a blindside since Paul and Victor already discussed that they saw the writing on the wall after the Veto Meeting.