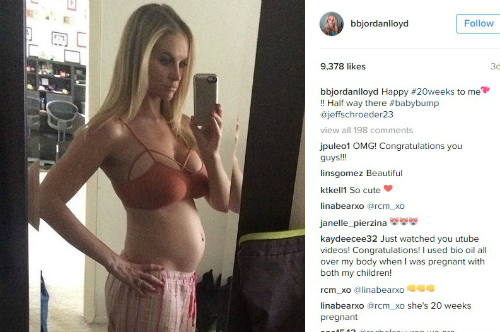 “Big Brother” and “Amazing Race” alumni Jeff Schroeder and Jordan Lloyd surprised their fans with the announcement of their secret wedding in April – and then they dropped another bombshell. Turns out Jordan was pregnant when they wed and now she’s showing off her growing baby bump!

Jeff Schroeder and Jordan Lloyd are known for being very open with fans and share tons of info about their lives on their YouTube channel “Jeff and Jordan TV” and their pregnancy is no exception. Jordan has been very active on social media about her pregnancy experience.

Jordan regularly posts pictures of her growing tummy and shares her mood, health and other concerns with her legion of adoring fans. Jordan posted her newest picture yesterday and showed a “baby bump update” as she hit the halfway point in her pregnancy.

Speaking to US Weekly, Jordan revealed the pregnancy was totally unexpected saying “My mind was completely on wedding mode and not on baby mode” but the reality TV star is embracing her curves and body changes. 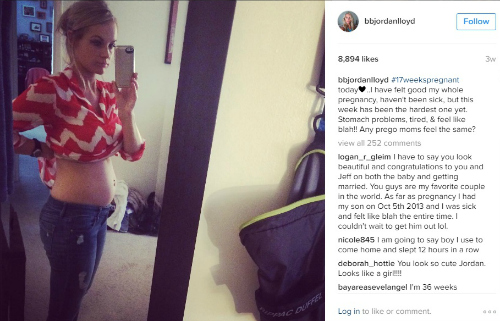 The 29-year-old newlywed gives her fans frequent pregnancy update on Instagram and this most recent pic shows her tummy finally starting to look obviously pregnant as she passed the mid-point mark of her pregnancy.

In a recent tweet, Jordan said, “My social life is changing along with my body…” Another tweet shared that more adding “being constipated, fatness… things have changed” and still another said, “I crave @ChickFilA everyday since being pregnant!”

In mid-May, Jordan told fans, “I have felt good my whole pregnancy, haven’t been sick, but this week has been the hardest one yet… tired, & feel like blah!! Any prego moms feel the same?” Jordan Lloyd also admitted, “I can’t believe how tired I feel, and I haven’t done anything for days.”

The news of her pregnancy and marriage came as a shock to many Jeff and Jordan fans. Their social media followers and fans were expecting the reality TV supercouple to have a lavish wedding and then a baby later. 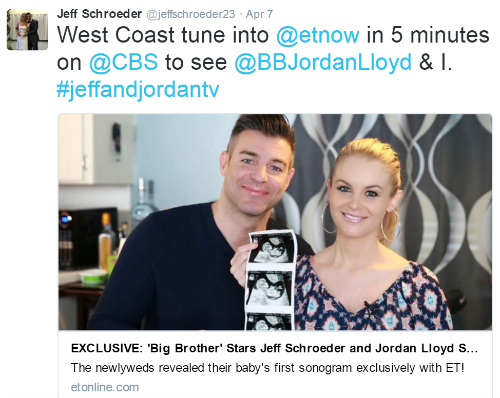 In a BB shocker, though, Jeff stepped up to the plate last year and proposed marriage to Jordan in a tear-jerking episode of “Big Brother 17.” Jeff has spoken often in recent weeks about life with a hormonal wife trying her best not to come unglued by his often crazy antics.

He bragged that Jordan was handling her pregnancy very well, but shares his worry that Jordan will snap at him without any warning. Welcome to married life, Jeff Schroeder. Of course, since the reality TV couple also spent time on WE TV’s Marriage Boot Camp, he should be well-prepared.

Jeff and Jordan’s little one is due in October but they have not revealed their baby’s gender yet. Sources state that while Jordan has been giving regular updates via social media and the couple’s YouTube channel, she plans to keep certain aspects of the pregnancy a secret until the baby arrives.

Stick with CDL for all your “Big Brother” spoilers, news, and gossip.