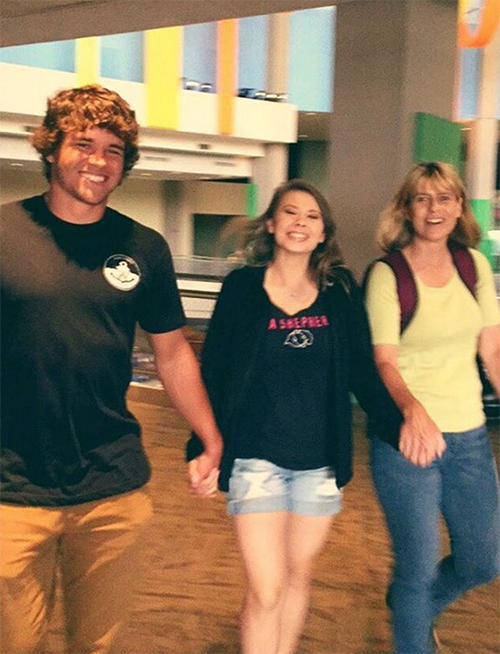 Dancing with the Stars alum Bindi Irwin is reportedly engaged to Chandler Powell, who is desperate to elope. Is Terri Irwin furious that the couple plans to run off to Fiji and get married as soon as Bindi turns 18 in July?

Despite living on two different continents and having busy professional lives, Bindi and Chandler managed to fall desperately in love. An insider revealed to National Enquirer that Chandler recently asked Bindi to marry him. The 19-year-old professional wakeboarder traveled halfway around the world in order to get down on one knee and propose to Bindi.

Bindi accepted Chandler’s proposal according to the source. “Bindi hugged and kissed [Chandler] and said ‘Yes! Yes! Yes!’” But there won’t be a wedding if Bindi’s mom Terri has anything to say about it.

Terri is allegedly an overprotective mom who constantly keeps a more than watchful eye on Bindi and Chandler. If Terri Irwin finds out Chandler Powell bought Bindi Irwin a promise ring – no actual engagement ring yet – Terri will probably blow a gasket.

The late Steve Irwin’s little girl has always been in the public eye, but it wasn’t until Bindi appeared on Dancing with the Stars that the world really took notice. Bindi has a sizable inheritance so is it any wonder Chandler wants to run off to Fiji and marry her minute Bindi is old enough to get married without parental permission. Fame and fortune – hopefully Bindi will be smart enough to insist on a pre-nup.

There were many reports that Bindi and Derek Hough were getting cozy while partnered on DWTS. Both Bindi and Derek set the record straight about any purported romance – there was nothing but dancing and friendship.

Did the whispers that Bindi and Derek were getting a little too close for comfort push Chandler to step up his romance game with Bindi? If the reports are true and Terri Irwin is always hovering around the couple it may have taken quite a while for Chandler to get Bindi alone long enough to propose marriage.

We’ll just need to sit tight and see if the teenagers elope in Fiji. Bindi Irwin will be 18-years-old in July, so it won’t be long. Will Terri Irwin be able to intervene and keep Bindi from marrying Chandler Powell?