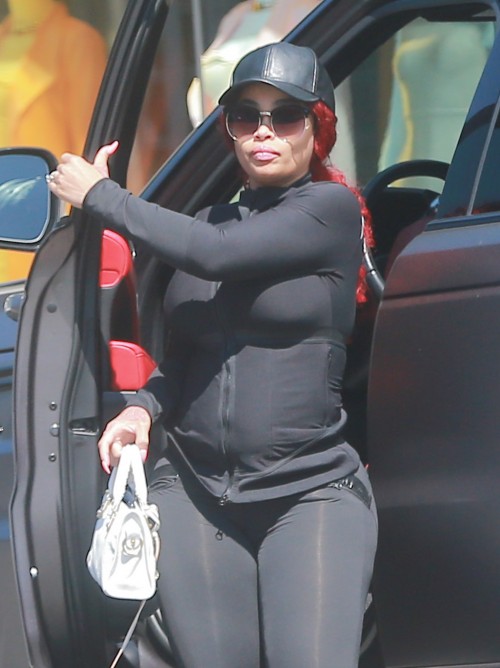 Looks like Blac Chyna and Rob Kardashian won’t be getting hitched until after their baby is born. At least that’s what we’re hearing now. That should satisfy the Kardashians and Jenners for a little bit anyway.

You can’t stop a baby from entering the world, but you can put a halt to a wedding you don’t want to happen – and the Kardashians, particularly Khloe Kardashian, seem to want Rob Kardashian to slow his roll with Chyna.

Blac Chyna claims she and Rob are focusing on their upcoming baby, not the wedding. We suppose this makes sense. Having a baby isn’t something to be taken lightly. Perhaps it is smart to re-examine your priorities.

Then again, Blac Chyna isn’t a novice when it comes to babies or postponing weddings. She had a son, King Cairo, with Tyga (Kylie Jenner’s ex). They were going to get married but never did. Yes, we know, you’re probably thinking this is a similar pattern as before.

Will Blac Chyna back out of marrying Rob too? We’ll have to see how all of this unfolds. This child she’s having with Rob Kardashian will be her second, and his first.

Wedding talk aside, according to Blac Chyna, Rob will be an awesome but overprotective father. That’s not all we’re hearing from Rob Kardashian and Blac Chyna’s camp.

Blac Chyna is carefully considering her wardrobe choices in the last days of her pregnancy. Chyna told UK’s DailyMail at a recent event, “I just want to keep my ass covered. Pregnancy has treated me well so far.”

This is a significant departure from Kris Jenner, Kourtney Kardashian and Kim Kardashian who all posed naked while preggers.

Blac Chyna seems to be more reserved and less spontaneous than Rob’s family. We wonder if this pleases him. Sure, Blac Chyna is a model and has worn skimpy outfits.

But Chyna also appears to seriously consider how something might look on her before wearing it unlike the other Kardashians – especially Kim Kardashian.

Blac Chyna seems to respect her body enough that she carefully chooses how much to expose and when – and also respects the eyes of anyone who will see her photographs during her pregnancy to not reveal herself too much, for which we’re sure the public is thankful.

We think the Kardashians and Jenners go too far in their magazine, tabloid and social media pics. They do it just for attention. They seek the wow-factor every time.

Blac Chyna doesn’t seem to care about that. She’s focused on her baby and enjoying her pregnancy with her fiancé Rob Kardashian. Whether Chyna and Rob marry or not, we’re sure Blac Chyna will be a great mother to the newest addition to her family.

What do you think? Is Blac Chyna right to keep her tushy covered while pregnant? Do you think naked baby bump photos are on fleek – or totally inappropriate?