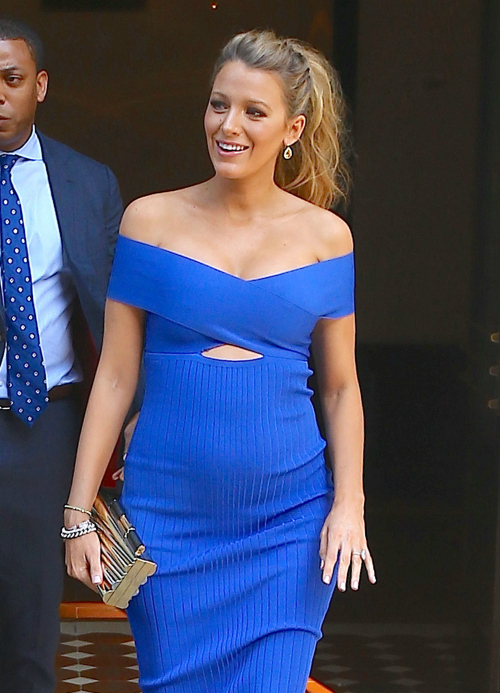 Blake Lively hates watching her husband Ryan Reynold’s sex scenes while traveling on airplanes. The actress admitted this juicy tidbit while making an appearance on The Tonight Show Starring Jimmy Fallon on June 20th. Her exact word was “tortured.”

Blake explained why she finds it uncomfortable to see her husband get down and dirty on film while traveling. While flying on a plane with her daughter James, the 28-year-old pregnant actress stated that every passenger screen showed her husband.

And it wasn’t just that his movie was playing, it was that Ryan Reynolds was having sex, not with her obviously, but with another woman in the Tim Miller film, Deadpool. And it wasn’t plain vanilla sex, either.

Blake Lively says that everyone on the plane wanted to watch it, but it’s difficult to endure for 14 hours non-stop. We can certainly understand the problem with seeing the man you love in those risque scenes but, at the end of the day, at least he isn’t being unfaithful.

We think it would be even more awkward if it were Blake Lively in those scenes instead. How much more uncomfortable would it be to be stuck seeing yourself on screen getting busy while other passengers drooled over you?

Blake confessed watching Ryan in these scenes is tough and is an odd form of torture. Lively said, “Having your husband having mashed potatoes eaten out of his butthole, because that’s in the film, is lovely. It’s a cruel and unusual form of torture.”

Lovely? If mixing food and sex is your thing, great. But mashed potatoes? Yuck! What exactly were the writers thinking with that scene? But given Deadpool’s R rating and insane storyline, the bootie potatoes was one of the least disturbing parts of the film.

Blake Lively went on to describe how her young daughter James reacts to seeing her daddy on the screen. The poor thing doesn’t realize her father can’t see, hear, or communicate with her.

No doubt Ryan Reynolds and Blake Lively’s daughter James will sort it out in time given how prolific her dad’s movie career is right now. Although it seems like Blake should be more concerned with her daughter seeing her dad’s naked bum on screen…

Perhaps the next time Blake and daughter James fly, they need to bring something to occupy them both. We don’t know, maybe crayons and a coloring book or an iPad with kid-appropriate content for James – and a stack of fashion mags for her mom.

Although if you have to watch your husband on-screen having sex, it’d be nice for him to look as good as Ryan Reynolds does – he’s not flexing your average dad bod – the guy looks amazing. What do you think?

Would you be icked out watching your husband flash his business if you were Blake Lively? Share your comments below and check back with CDL often for all the latest celebrity news and gossip.