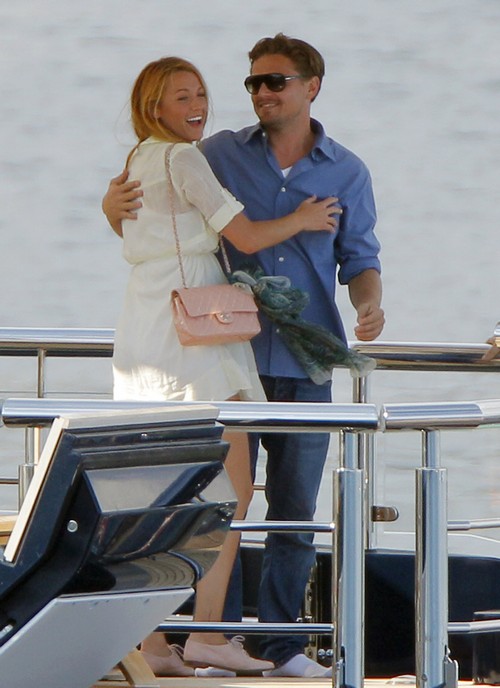 Leonardo DiCaprio usually goes for much younger models – however his ex-girlfriend Blake Lively caught his eye at a recent event, and Blake’s hubby Ryan Reynolds was NOT happy about it. For those of you who don’t remember, back in 2011, Blake and Leo were one of Hollywood’s hottest couple. Back before Blake was a mom, and spent her free time posting new jelly recipes on her websites.

Blake and Leo broke up out of nowhere, and Blake and Ryan hooked up soon after. Rumor has it that Blake even dumped Leo for Ryan.

In February, celebrities came out in droves to attend the amfAR Gala in New York City – including Blake Lively, Ryan Reynolds, and Leonardo DiCaprio. Things got a bit awkward at the charity event when Leo began trying to get Blake’s attention – and Ryan got super jealous of the Oscar winner and his wife’s former relationship.

According to an all new edition of Star Magazine, “Every time Blake was in Leo’s line of vision, he was winking at her and grinning. Ryan was furious.” The tabloid’s inside source went on to say that Blake tried to “pretend she didn’t notice” her ex-boyfriend flirting with her, but it was clear that she was loving the attention that she was getting from him.

Does this mean that there could be trouble in paradise for Blake and Ryan? Would Blake ever actually cheat on Ryan with Leonardo DiCaprio? Technically, Leo is single again this week … so anything could happen. And, in theory – Blake did allegedly cheat on Leo with Ryan Reynolds back in the day. Karma always comes back around.

What do you guys think, is Ryan Reynolds over-reacting? Or should he be worried about Blake and Leo’s innocent flirting? Let us know what you think in the comments below!