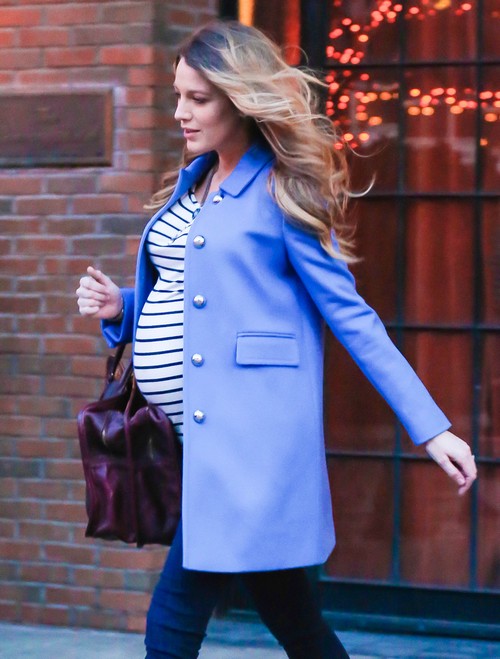 Congrats to Blake Lively and Ryan Reynolds, who just welcomed their first child – a baby daughter – over the holidays. Blake Lively reportedly gave birth before the New Year’s near the couple’s Bedford, NY home. Sources close to the couple say that the baby arrived earlier than expected, but everybody is healthy and doing well despite the premature birth.

Blake first announced her pregnancy via her website, Preserve, and I’m sure we’ll be getting plenty of updates about her baby daughter via the same website. It’s a genius move, really – Preserve never saw as much traffic as when Blake first announced her pregnancy and showed off a picture of her baby bump. And now all the mothers out there will be following Blake’s every move, because motherhood in Hollywood has somehow become its own industry, courtesy of Jessica Alba and her non-acting ilk.

Blake Lively and Ryan Reynolds have been relatively silent in the media during the majority of Blake’s pregnancy, for which I give them kudos. At least we weren’t forced to listen to both of them go on and on about the miracle of life, and who knows what else in poem format on that website. But you know, I have a feeling that such poems and soliloquies are coming. Blake isn’t going to give birth to a baby daughter and keep quiet about it, especially with her own personal PR machine sitting right in front of her. It’s not like she has an acting career to keep her busy now, and her immediate future will be dedicated to helping her baby and recovering from the birth.

What do you guys think about Blake Lively and Ryan Reynolds welcoming their first child? Do you think Blake will resist the urge to post about her daughter every day? And what will the happy couple name said baby girl? Let us know your thoughts in the comments below.