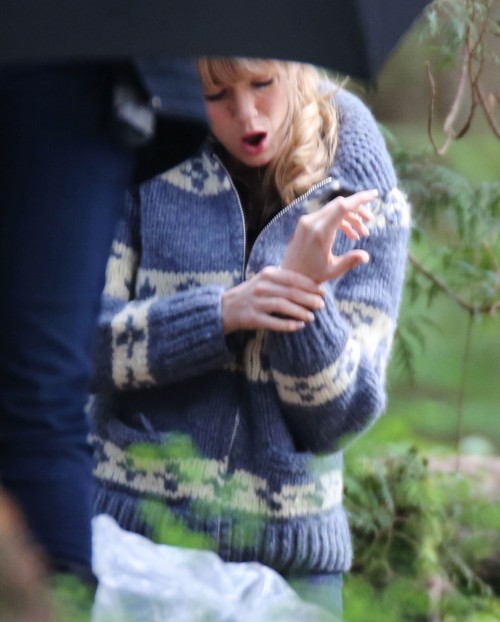 Blake Lively is currently filming Age of Adaline in Vancouver, but despite a tightly controlled set and security everywhere, Blake managed to fall down a hill and injure herself.

Blake was filming a scene on April 21st when she slipped and fell down a hill. Initially, she screamed in pain, but after realizing that there was only a small cut with minimal blood on her hand, she laughed with the rest of the crew. I guess someone’s not really used to roughing it for work, huh? I can’t blame the crew for laughing, although Blake does have more experience with fashion and clothes than she does with getting rough and tumble. After all, she did shoot Gossip Girl for more than five years, and I can guarantee you, there was no slipping and falling down hills while filming Gossip Girl.

Anyway, the paparazzi conveniently managed to be located nearby during Blake’s little accident, and they got pictures of the fall as well as Blake’s cut. It’s a small injury to her hand, and I doubt it will hold up filming or delay any scenes. She probably got it bandaged asap, but with CG and makeup, they can remove anything and everything in post-production these days – even if it does cost them an extra few thousand.

Age of Adaline is also the first high-profile film that Blake’s booked since the end of Gossip Girl, and with a well-known cast and a high concept hook, it needs to do well to establish Blake’s presence in Hollywood. If it doesn’t – well, she can probably start looking back in television for work. Although that’s not necessary a bad thing these days, considering how much more complex TV is than film.

Blake Lively slips and falls down a hill while filming a scene on the set of ‘The Age Of Adaline’ in Vancouver, Canada on April 21, 2014. Blake screamed in pain at first but after checking out the cut and blood on her hand started to laugh with the rest of the crew.