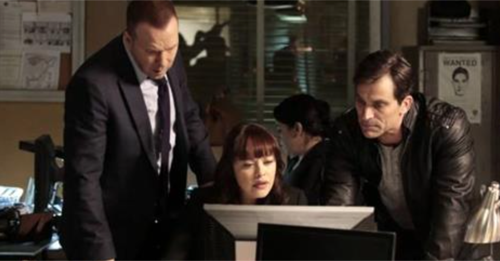 Tonight on CBS Blue Bloods continues with an all new Friday April 8, season 6 episode 19 called, “Blast From the Past.” and we have your weekly recap below. On tonight’s episode, Danny (Donnie Wahlberg) and Baez (Marisa Ramirez) investigate a robbery crew on a wild crime spree and partner with a detective who broke Baez’s heart years ago.

On the last episode, Danny and Frank teamed up on a case involving an ex-con who was rehabilitated, but who was now involved in a murder. Did you watch the last episode? If you missed it we have you covered with a full and detailed recap right here for you.

On tonight’s episode as per the CBS synopsis, “Danny and Baez investigate a robbery crew on a wild crime spree and partner with a detective who broke Baez’s heart years ago. Meanwhile, Frank struggles with whether to promote an officer who was acquitted on charges of killing a boy, fearing it will lead to public outrage.”

Blue Bloods “Blast From the Past” airs tonight at 10:00 pm ET and we will be live blogging all the details. So don’t forget to come back and refresh your screen often for live updates.

A famous boxer was targeted in Brooklyn on tonight’s episode of “Blue Bloods” and Danny seemed to believe that it was connected to something he and Baez have been working on. However, the Brooklyn detective that was in put charge of the case hadn’t wanted to just turn it over to someone else. So he agreed to work with Danny and Baez. And Danny was hoping that wouldn’t prove to be a problem with Baez.

Baez apparently knew the Brooklyn detective as in new home. So Danny hadn’t wanted that to be a problem yet he knew that it could be. The other man had been married when he promised Baez that he wanted to be serious with her and that he was going to leave his wife. And not that surprisingly he lied.

Jimmy Mosley had said what he needed to say in order to get Baez to sleep with him and she had been crushed afterwards because she honestly thought he loved her, but he hadn’t. Jimmy had loved himself so he had only cared about himself. Yet, Baez couldn’t exactly stay on in Brooklyn after what happened with Jimmy. So that’s when she transferred to Manhattan and was eventually paired with Danny.

Only Danny didn’t think that Baez had learned that much from her previous encounter with Jimmy. He later spotted her getting friendly with Jimmy when she thought no one was looking and so he may have stepped in before that one little conversation went anywhere. He told them that he found proof that Sean Young had fallen into the same honey trap as their earlier victims in Manhattan. And therefore he had concrete proof that they were all looking for the same group of people.

So the one question on their minds had been why did the MO changed? Sean Young had been shot twice even though he had been cooperating with the thieves and hadn’t tried to fight back. And, well, that hadn’t happened with anyone else. Before they had just gotten what they wanted and then they fled the scene leaving behind a very embarrassed person who for the most part was uninjured.

And so they hadn’t made sense for the crew to shoot Young nor it did made sense that the boxer was merely a start for their body count.

The driver that had driven Sean and his lady friend had been found dead in the back of his own limo. So they probably did that to get him out of the way and leave behind less witnesses yet that was also something new. As if they recently decided that they didn’t want to bother leave anyone behind anymore and stopped caring about the consequences. Which would be heavier sentences if they were caught on murder rather than just armed robbery.

Across town, however, Jamie and Jenko were learning a tough lesson about helping people. The two had been close by to a couple of ladies when they heard their screams and so they had asked the women what happened. And the ladies explained that someone had stolen their bags including an engagement ring that was a family heirloom.

So Jenko and more importantly Jamie (he had a thing for Maribel) had felt bad for these ladies. They knew that the robbery detective was busy with more than one case and so they tried to help out. They looked into a crook that they knew worked the area and they got him to hand over information. Such as he would fence a priceless ring and so they threatened this “seller” into telling them who had tried to sell him the ring.

Athough, they found it had been one of the girls. Rosa had secretly stolen it from her friend Maribel because she said she needed the money, but the other girl didn’t want to forgive her. Especially not after Rosa had tried to imply that it had just been a stupid ring instead of the respected family heirloom that Rosa had known had meant more to the family than any money.

And maybe because of his initial mistake in overlooking Rosa as well as other things that he wished he could have personally corrected, Jamie found a reason to speak up for Thomas Scully. Thomas was a detective that up for a Sergeant promotion and he’s been on the job long enough to deserve it however to do so would cost Frank public opinion. The police commissioner, you see, couldn’t been seen promoting a man that had once taken part in the slaying of an unarmed Muslim teenager following 9/11.

Thomas and his fellow officers had just lost a fellow cop to gun violence that week and 9/11 had literally been months for them when they had heard a report about an Islamic extremist creating a massive gun supply and so Thomas has even said that the situation itself had been a powder keg. Which resulted in the officers involved going in with guns blazing. And someone that had been innocent as well as unarmed got hurt.

They had just seen a teenager and had mistaken his actions of trying to reach for his wallet in order to reach his ID as him reaching for a gun. So Thomas shot first and the rest took part in what the department calls a “sympathetic response” by firing off sixty-one rounds into the teenager. And while it was the right thing for Thomas to do when he admitted to his crimes plus tried to atone for them – he simply wasn’t going to be able to make sergeant if he stayed in the city.

The crimes that had occurred had been in another commissioner’s reign, but Frank didn’t want pass the buck nor did he wanted to internal promote Thomas. So he gave Thomas a choice. He told the other man that he could accept a job as a police officer elsewhere and make even more money now than he could if he stayed on for five more years in the city. And that that had been that. Thomas knew that he couldn’t move pass what he had done if he stayed so he chose to leave.

And although Baez and Danny eventually got their guys in the end, she realized that she couldn’t look back with Jimmy.

He had flirted with her and had even invited her over to his place now that he was single. Yet, it had all been a lie again. Jimmy had a girlfriend waiting in the wings and Baez had found out about it when she caught the two together. So thankfully Danny hadn’t said “I told you so”, he just offered his moral support.