Bones Live Recap: Season 11 Episode 19 “The Head in the Abutment” 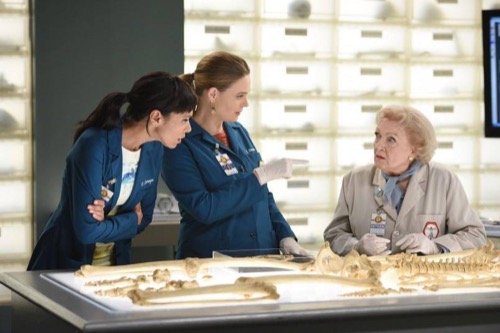 Tonight on FOX Bones airs with an all new Thursday, June 16, season 11 episode 19 called, “The Head in the Abutment” and we have your Bones recap below. On tonight’s episode, the death of a professional hockey player is investigated after his headless corpse is found in a river, and Booth’s (David Boreanaz) love of the sport proves to be an asset in the case.

On the last episode, as part of a promotion for the Jeffersonian’s Medico-Legal lab, a film crew followed the team as they investigated a murder case involving a corpse buried in a landfill more than 10 years ago.. Did you watch the last episode? If you missed it, we have a full and detailed mid-season finale Bones recap right here for you.

On tonight’s episode as per the FOX synopsis, “the death of a professional hockey player is investigated after his headless corpse is found in a river, and Booth’s love of the sport proves to be an asset in the case, but it also reunites him with an old rival and puts him back on the ice. Meanwhile, Hodgins and Oliver compete to build a drone to retrieve the victim’s head; and Brennan and Booth try to get their home organized and free of clutter.”

Tune in at 8PM EST on FOX to watch Season 11 Episode 19 of BONES. We’ll also be updating fans right here with a Bones recap as the show airs so be sure to check back in with us. Brennan and Booth have had a long television run. Do you like that their characters mix up business with home life? Hit up the comments and tell us your thoughts about their tangled relationship!

Booth and Bones were doing a little spring cleaning around the house and were trying to get rid of things that they no longer use when they got called into work on tonight’s episode of “Bones”.

A headless corpse was found by the river and the team were going to need everyone in to help identify the victim. However, Angela ended up helping the team with this one when she found a video posted up online that showed what happened to the victim’s head. Angela it seems had searched corpse and Anacostia where the body was found and that led her to a couple of goofballs. Two guys who had been on the river recently had posted a video of the moment they had come across a corpse and accidently decapitated it after one of them turned their boat’s engine on.

Only the guys then fled the scene because they thought they were going to get into trouble if they stuck around. Although, they did kind of defeat that specific purpose when they then posted a video of what happened online. So they were just lucky that neither Booth nor Aubrey decided to question about that. And that the squints were more concerned about finding the head. There were apparently no identifying markers found on the body so Angela wasn’t able to identify him though they did know that it was a him and that he was peak condition.

The victim had a lot of bruising and scars however he hadn’t been taking drugs and the only thing that Cam could find in his stomach was a protein bar. So while Hodge was figuring how to get to the head, Bones was talking about the case with Booth and mentioning everything they found so far. And surprisingly some of the things she said reminded Booth of someone. He said her description matched a hockey player by the name of Seth Lang. Seth had last been seen hanging out with his teammates and since then he had gone off the grid.

Booth as it turns out was a huge hockey fan and he used to play himself. So he knew what he was talking about with Seth and the victim was finally identified. But sussing out suspects was much harder for Booth because of who the victim was. Booth had gone to the team’s practice session and he had been given the access he needed by a frazzled team owner. And therefore the problem that Booth kept running into was his own hero worship of the guys on the team.

Booth had been awed by the fact that he got to speak with the team’s coach who was also a hockey great. So he had a little fangirl when he met Jeremy Roenick. Yet while Booth was busy getting excited, Aubrey was working through suspects. Aubrey had questioned a dimwitted team player that had some friction with Seth before Seth disappeared and he had wanted to see for himself if the other man had it in him to kill. Only the team’s enforcer didn’t seemed to be all that concerned about Seth replacing him on the team despite what the rumors may say.

So later Aubrey and Booth went to go question the equipment manager however Booth knew him personally and there might have been something a grudge between. Darryl and Booth had played against each other back in High School so they weren’t exactly best buds and it didn’t help that Darryl kept asking for a rematch. Though Darryl proved to be useful. He had been selling some of the players’ things online so they had questioned him about it and he told them that he had to. He said the new team owner had cut everyone’s salaries by fifteen percent when she came on.

Only that didn’t sound like the Katie Stober that Booth and Bones had originally met. The young women that they met had appeared frazzled and slightly overwhelmed by all that she had to handle it after inheriting the team from her late husband. However, Darryl said that was all a ply because Katie was cold-hearted and calculating. Which sounded like someone that the feds would want to question again. So they had Angela look into the team finances and figure out what Katie had been doing.

Angela however didn’t find anything that could prove Darryl wrong. Katie had been making shrewd business decisions which got rid of the overhead as well, but she had also been sabotaging the team in order to move it to a bigger market. Booth had said that if she could sink the team that she could probably make a good two hundred million because of it and that sounded like motive. So Katie was shaping up to be a pretty sound suspect just as the squints found the head.

Hodge and Oliver had something of a race to see who could find the head first and then bring it back first. So they had both used drones and Hodgins ended up using his drone to transport the head over public airspace. But Aubrey didn’t really hold it against the guys. He had to pretend like he reprimanded and in a way he did so though Aubrey was more concerned about their latest gaming score because they didn’t think that he could match them. And therefore the guys were arranging a gaming date before they remembered they had to get back to work.

The head merely confirmed what they had already found out. Seth had been killed in the team’s locker room and someone had drowned in the cooling tub that he was using. So one of things that they hadn’t known until they found the head was that Seth had been hit with a specific hockey stick. And Booth was able to take it from there. Booth knew that each player had their own customized hockey stick and that led back to one player in particular rather than either Katie or Darryl.

Drew who had been dismissed earlier by Aubrey who felt Drew was too dumb to commit murder had turned out to be the killer. Drew had gotten a drug pusher pregnant and he had a problem with Seth because was going to turn the young woman in. Seth hadn’t liked it that this woman kept trying to sell drugs to his teammates so he was going to tell the police. And Drew didn’t want his kid to grow up with a mother in jail. Only now the child will have two parents in jail.

But as for Darryl, Booth gave him the rematch he had wanted and he had thrown the game. He said it was about time that Darryl moved on with his life.