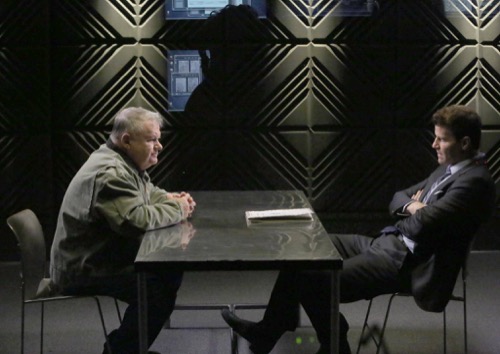 Tonight on FOX Bones airs with an all new back to back Thursday June 2, season 11 episode 18 called, “The Movie in the Making” and we have your recap below. On tonight’s episode as part of a promotion for the Jeffersonian’s Medico-Legal lab.

On the last episode, a Secret Service agent’s body was discovered by an inebriated college student on the eve of a presidential visit, but Booth was blindsided when the agency refused his help with the case. Did you watch the last episode? If you missed it, we have a full and detailed mid-season finale recap right here for you.

On tonight’s episode as per the FOX synopsis, “as part of a promotion for the Jeffersonian’s Medico-Legal lab, a film crew follows the team as they investigate a murder case involving a corpse buried in a landfill more than 10 years ago, and each member provides commentary in their fields of expertise.”

Tune in at 8PM EST on FOX to watch Season 11 Episode 18 of BONES. We’ll also be updating fans right here as the show airs so be sure to check back in with us. Brennan and Booth have had a long television run. Do you like that their characters mix up business with home life? Hit up the comments and tell us your thoughts about their tangled relationship!

The Jeffersonian Forensic team were put under a microscope on tonight’s episode of “Bones” when a television crew for ‘America in Profile’ decided to do a profile on the team as well as the methods they use to solve cases.

The Jeffersonian, as many people know, has a reputation for closing the hardest and sometimes most profiled cases so it wasn’t surprising that someone would want to document them however, there were a few people at the office that were putting on a front. Cam for instance, had wanted everyone at the lab to begin calling her Dr. Saroyan which she thought sounded more professional. So Hodgins had made fun of her for that one. But Cam actually wasn’t alone in putting on airs. Arastoo had also tried to make himself look better and Hodgins finally tried to get someone else to call him ‘King of the Lab’.

However, the production crew weren’t all that interested in what the team called each other. As it turns out they wanted to focus on two things. How the Jeffersonian sent about solving cases and how the job affected their everyday life. So while they wanted to know about the latest body that had been brought into the lab, they also took the time to ask the team about their families and whether or not if they sometimes end up taking the job home with them. And the latter part turned out to be true when the crew followed Bones and Booth around.

The couple hadn’t shied away from mentioning that they sometimes have arguments because of what happened at the office. So Booth had told the crew about his infamous gut which has sometimes those very same arguments. He said he likes to go with his gut while he’s investigating any usual deaths because his gut was never wrong and, just to prove his gut’s prowess, he later called murder on the latest body. A badly decomposed body had been found in a landfill and Booth swore it was murder before the squints could even run their tests.

And fortunately for him, it was murder. Brandon Bloom had been murdered ten years ago and Cam proved that when she found no evidence of any trash particulates in his lungs because that meant he had been dead before his body was dumped in with the trash. But Arastoo and Bones had taken a look at the victim’s unusual amount of injuries during his childhood. So they had mistakenly believed that the victim had been abused when he was younger and had passed on that misinformation to Booth.

Booth, though, had tried to remain professional in front of the cameras yet they had seen what he had been trying to hide as he questioned Brandon’s father. So Bones had later been asked if Booth took it that hard every time he had to question a parent and the only way she could answer them was to say that Booth cared. And Booth did care so he eventually acknowledged that he could have spoken differently with Brandon’s father.

But the production crew did get personal with everyone. They had asked Angela why she hadn’t gone to Paris and what was stopping her from going with her family now? So Angela and Hodgins had to explain his accident that had been caused when someone had planted a bomb at a crime scene. And the guys had also been asked about their missing team members.

Like Sweets who was murdered on the job, but that was still missed by Bones and Booth who said they didn’t know if they would have gotten together if it hadn’t been for the late psychologist. Then there had been Zach who Hodgins didn’t like recalling was institutionalized. And finally, it had been Arastoo that had talked about a Vincent. The quirky intern that had been working on a dangerous sniper case and who should have been safe in the lab.

So the Jeffersonian team had mentioned the highs and lows of the job however they said that closing a case was what made everything they’ve seen worth it. Although with Brandon’s case, Booth came to write off the father despite the father looking good for the murder. Brandon’s father had claimed that he hadn’t seen or heard from the son on the night he died though that was later proven to be a lie. And the father had claimed that he hadn’t had any problems with his son which again was shown to be a lie.

Bones and Arastoo had realized that they had been wrong about Brandon’s alleged abuse, but that still didn’t take away from all the times that the father had lied during questioning. For he had seen his son on the day Brandon died and he had even asked him for money because he had been in a hole with a bookie. So that might explain why Brandon had been talking about money with his best friend, but the father swore that his son didn’t want to help him and had thought he was pathetic for asking.

Brandon, it seems hadn’t wanted to be like his dad who could barely hold a job and gambled what little they had. So he had tried to better himself and, while his girlfriend at the time hadn’t been appreciative of his job as a pizza delivery guy, he had tried to make it on his own. But everyone at the Jeffersonian suspected Brandon’s father right up until Bones found the cause of death and Hodgins deciphered the weapon based on the wounds.

Brandon had been killed by a saw and although that could make his father look guilty because the older man used to have workshop in his garage – Booth had thought of someone else. Booth had remembered Brandon’s friend who had once tried to begin a T-shirt company with Brandon. So he had gone back to the other man’s house and there Bones had found the murder weapon that was still in plain sight.

Apparently Brandon had wanted to cash out of the T-Shirt company because he had needed the money back and his friend got into an argument with him because there wasn’t anything left to return. So one thing led to another and Brandon fell against a saw. Which caused his death. And a scared young man had then tried to hide what was happening.

So despite the upsets, the TV show did get to catch the moment a killer was brought in and they got to pick up on many sentimental moments between the Jeffersonian team. Like Bones showing up at her daughter’s Career Day and Cam admitting to her feelings for Arastoo on live TV.