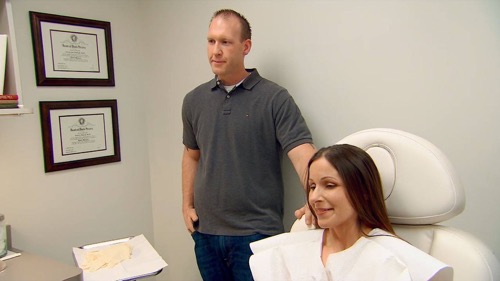 Botched continues tonight with an all new Tuesday, May 31 season 3 episode 4 called, “Double D-isaster” and we’ve got your recap down below! On tonight’s episode, Paul helps a female impersonator who isn’t comfortable walking the streets without makeup; a woman with “sideshow boobs” goes under the knife to improve her marriage.

On the last episode, Paul helped singer Norwood Young find his voice again by performing a revision rhinoplasty, while Terry reconstructed the chest of a young mother whose surgeon put in two different sized implants. Did you watch the episode? If you missed it we have a full and detailed recap, right here for you.

On tonight’s episode as  per the E! synopsis “Paul helps a female impersonator who isn’t comfortable walking the streets without makeup; a woman with “sideshow boobs” goes under the knife to improve her marriage; the doctors extract silicone star implants from a former body-modification enthusiast.”

Tonight is going to be another crazy episode that you won’t want to miss, so be sure to tune in for our live coverage of E!’s “Botched” tonight at 9PM EST! Meanwhile, while you wait for our recap, hit the comments and let us know how excited you are about this season 3 episode 4?

The doctors got the chance to meet the amazingly sweet and flamboyant Victor on tonight’s episode of “Botched”.

Victor was an entertainer and female impersonator, but unfortunately, Victor had gone to the doctors because of what he called a ‘Silicone Snout’. Apparently the name came about after Victor had trusted the wrong person – a nurse in a plastic surgeon’s office – and that person had injected silicone into his face without either a license or technique. So eventually the silicone built up and began to misshapen the nose. And that had made Victor insecure.

Victor no longer went outside without his makeup and his persona of Victoria. So the reason he had gone to the doctors was because he wanted to return to Victor and needed to feel ok in his skin to do so. Yet, the surgery carried a risk. Paul had said that silicone could make fixing things difficult and therefore he had to tell Victor that he could end up making the nose worse off than better. And, as with many cases, Victor felt that risk was worth taking.

Victor wanted to be able to be confident in his own skin so he had no problem with risking surgery, however, a second patient by the name of Kim had had her share of surgeries and she was willing to risk another because there was no one there to give her the confidence she needed. Kim had been left feeling low after her marriage fell apart and so she had thought that breast implants would be the answer. But the first surgery had caused some hardening of the breast and another surgery had been done with an incompetent surgeon.

Now the hardening could have happened to anyone yet the following surgeries were just error after error. There had been one surgeon that had listened to Kim as she asked for a C cup and he had said that there would be no problem with that. However, that surgeon went on to ignore Kim’s directive and give her a 32DDD for a small body. So it wasn’t all that surprising that Kim later began to feel discomfort.

Kim had been trying to live with the larger side and for the most part she was doing fine, but then then implants ruptured in both breasts and that had left her with free-floating silicone. Which can be harmful if not lethal. So Kim had to get the breast taken out and she had to get the silicone cleaned up. And sadly her luck never improved because she also had complications with reconstruction.

Kim had checked out her chest a few days after her fourth surgery and it had looked as if someone folded in half. And her nipples had been barely noticeable. So with her situation going from bad to worse, that had managed to knock Kim of what little confidence she had remaining and her second husband wasn’t that much help. Tim had seemed like a nice guy and he had been with her through the later complications however he wasn’t as sensitive as he could be.

Paul and Terry usually like it when husbands are there to support their wives, but Tim had made Paul speak up and tell him a few things. Apparently Tim and Kim had told the doctors that she doesn’t get changed in front of him anymore and that he had only looked at her chest once since the latest botched surgery. Only his words took on a different meaning when Kim went go change for her consultation and Tim admitted to turning around so that he wouldn’t have to see her get changed.

That part had put Paul on his guard yet he didn’t speak up until they told Kim what the risks were with another surgery and Tim had been vocal about taking them no matter what. Even if there was a ninety-nine percent chance that it didn’t work – he said that they had to take that chance. So Paul had told him that he wasn’t being sensitive enough because there could be a lot of other things that could have gone wrong and at the end of the day it was just a breast.

So Paul speaking up like the way he had, had gotten Tim to check himself and be a little more supportive to his wife. Who did end up noticing a change in his behavior after Paul had talked to him. However, that was the only husband that proved to be a problem. Later a third patient had come in with her husband because she wanted to fix a youthful mistake that her husband had honestly tried to talk her out of.

Ashlea had grown up as something of a rebel in a small town. She thought everyone looked the same and she had wanted to stand out. So Ashlea ended up doing a few things kind of out there when she was young. She had begun to experiment with body modifications and eventually she kept trying to go bigger and better when she found out that a local tattoo shop was going to be hosting a guest from New York that was known for subdermal implants. And well her then boyfriend/ now husband had tried to warn her against it, but she had thought subdermal implants was a good idea.

Ashlea it seems had liked the idea of getting star implants next to her ribcage however, living with it proved to be difficult. The surgery had left her in pain and the star pieces of metal under her skin has been known to restrict her movements. So as Ashlea got older and wanted to get her license as a yoga instructor, she realized that she was going to take those star things out yet there was also a part of her that still fascinated with the whole thing so she had asked that she been awake during the removal.

And to an extent, they were able to accommodate her with that. The surgery itself was going to be needing both Terry and Paul. So a lot of it was just them shuffling around each other while they did their best to extract the metal material without either harming her or risking her life by cutting into a lung. But Ashlea’s surgery was a success and she had barely had any pain because the stitches had held up so well.

Victor’s recovery on the other had some complications. Paul had thought that it was going to be easy to fix Victor’s nose and it had initially seemed that way when a lot of the pucker on the nose turned out to be a zit. Yet, after the surgery, Victor had noticed that there was a certain smell and that smell was later shown to be decaying skin. Some of the skin on the nose had begun to die. So Paul had to actually go back into surgery with Victor in order to save the nose and the surrounding skin.

So there had been a bit of a race to save the nose and fortunately Paul’s second go at the problem had yielded better results. The skin had been saved and Victor got to come away from his experience with what he wanted – a nose that didn’t look like a snout and the confidence he needed to reenter the world without his drag attire. Meanwhile, Kim’s surgery had also been a success because Terry had fixed the folding problem and had given her fresh implants that was also what she had originally been aiming for. And so both Kim and Tim got to put the past behind them.

But if there was a lesson to be learned in all of this, then it had to be that it was good for the people involved to have people in their corner and always go to an actual surgeon for surgeries.