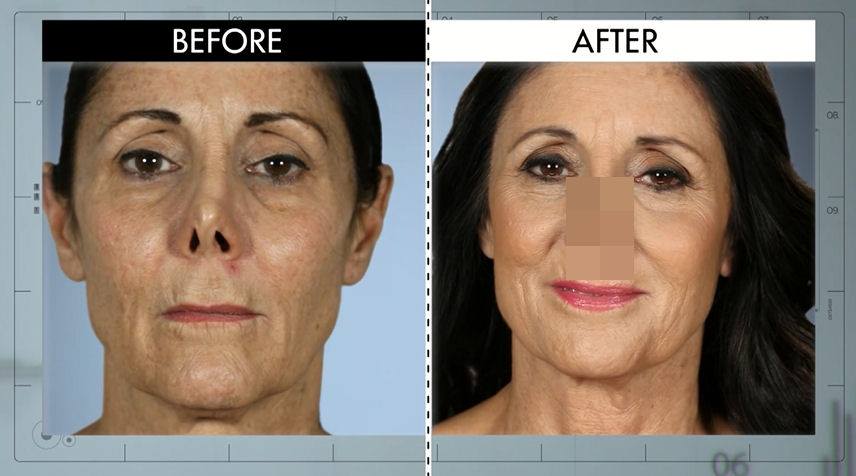 Botched continues tonight with an all new Tuesday, June 21 season 3 episode 7 called, “Seeing Double” and we’ve got your Botched recap down below! On tonight’s episode, a fitness enthusiast who’s addicted to nasal spray wants Paul to fix her nose, while a woman with deflated boobs comes to Terry for help.

On the last episode an ex-Playboy model, who almost died during a procedure in Ecuador, decided to take a second chance on fixing her neck and nose. Did you watch the episode? If you missed it we have a full and detailed Botched recap,  right here for you.

On tonight’s episode as  per the E! synopsis “a fitness enthusiast who’s addicted to nasal spray wants Paul to fix her nose, while a woman with deflated boobs comes to Terry for help. Also: The doctors meet the world’s “most identical twins.”

Tonight is going to be another crazy Botched recap that you won’t want to miss, so be sure to tune in for our live coverage of E!’s “Botched” tonight at 9PM EST! Meanwhile, while you wait for our Botched recap, hit the comments and let us know how excited you are about this season 3 episode 7?

The doctors saw Melissa on tonight’s episode of “Botched”. Melissa had come to them because she had what is called Grandmammaries which was another if not politer way of saying she had breasts that look like pancakes. Melissa as it turns out had apparently become an exotic dancer because of the great money she could make in that business however she quickly realized that most of the other girls there had much bigger breasts than she did. So she had later done something about that.

Melissa had gone to a doctor to get breast implants and she had told him that she wanted them big. Big being the main she had in mind. Yet, the doctor had a problem of some sort in the operating room. He said that he couldn’t get the implants under her muscle which was the best way to conduct the surgery so he just decided to add saline to on top of her chest. And while that did result in a size G meaning that she did the bigger sixe she wanted, the breast eventually dropped after a mere two weeks. So Melissa wanted to see if the doctors could fix them.

Though her situation was unfortunately intimidating. Terry it seems wasn’t so sure that he could fix her breasts because the way her previous doctor had done had really hampered the chance of a new surgery. The saline that had dragged Melissa’s breasts down had also left stretch marks as well as thin skin. So Terry was going to have take several steps if he wanted to fix her and admitted to Melissa from the start that he wasn’t sure that he could give her what she wanted.

He said that they were going to have to check her muscle capacity and both remove the current implants and hopefully put new ones in. Only the muscle capacity would determine where the new implants would go in. Either under the muscle which again the preferred way or over it like last time if that was the only choice. So a lot could actually go wrong if just one step didn’t carry out as Terry wanted it to. But Terry saw how much her current implants were affecting Melissa.

So Terry kind of agreed to fly blind on this one. He agreed to see what he could do and literally hoped for the best with the blood supply to the nipple. However, the surgery itself had been drawn out experience. Terry had removed the implants, tested the muscle, and then he had been able to put the new implants but the lift process had almost made her nipples stick out to the side. And so Terry had had stop in the middle of the surgery to see what he could do to get them symmetrical again.

And speaking of symmetrical, there was an unusual set of twins that had an appointment with the doctors later. The twins it seems had loved to do everything together and they had wanted to be identical in every way. Which in this case included breast implants and scarring. So the ladies had gone to the doctors because they wanted to see if the guys would give them identical breasts again. Although, there was a reason why no other doctor would touch their case.

No other doctor would take them on because the ladies were little off. They shared everything from the same job to the same boyfriend and they refused to have anything different about them. So even when they went to a restaurant, they had to have the same thing and their drinks had to be the exact same amount. And also when one of them was off, so was the other.

They were right about the scarring because they did have a pretty big scars with rigged lines yet they were a little too far off to be considered eccentric. They were just in their own league. They said they wanted to get married to the same man and get pregnant around the same time. And they had wanted the doctors to give them to identical breasts to each other. But Terry had some sad news for them. He told them that they weren’t perfectly identical.

And that went for more than just their breasts which he did examine as a courtesy. Terry said that they had different set of eyes with one of the twins have a narrower set than other and different clavicles. So the clavicles explain why they would never have the same chest. Their ratio from their nipple to the clavicle would remain different and would continue to look different as they got older. Which would mean that they could be perfectly identical.

Yet, the girls weren’t sure how they felt about that. They said they would think about it and Paul for one was hoping that they wouldn’t be able to find a doctor in Australia that would try to give them bigger implants in order for them to look identical, but it was still up in the air. The ladies hadn’t liked hearing that they weren’t going to be identical. So that had made them wonder if they would have been better off if they hadn’t gone ahead with the first procedure at all.

So Terry and Paul had to disappoint the twins though they hadn’t disappointed Melissa who looked much better following her surgery or Pam who had to have her nose rebuilt. Pam had apparently taken a nosedive at the country club pool when she was kid and it simply hadn’t occurred to her that maybe she shouldn’t be nosediving into four feet of water. However, she soon realized her mistake when she came up for and was bleeding all over the place so her mother had tried to help. Pam’s mom had taken her doctor to doctor and each time it had been worse.

The first surgery had been to correct the mistake yet the nose had looked worse off and the second surgery had been a saline implantation because he had needed to rebuild the bridge of the nose after the first surgery. Though the second surgery wasn’t that much of a success either because the implant shifted and left Pam with an indentation. So Pam could have gone ahead with a third surgery much sooner, but she had gotten tired of the surgeries and just wanted to get on with her life. So the reason Pam had finally changed her mind was because she was starting a business with her husband and didn’t want to be self-conscious.

But Paul had worried about the nose. He knew that he would have to remove the implant and rebuild the bridge though the first thing he had to convince Pam about was the nose spray. Pam had been using nasal spray to breathe and Paul had told her that she was going to give it a rest until after surgery. So giving that up had been hard for her and she may have gotten a little too used to it. Only all her efforts eventually paid off when Paul was able to rebuild her a nose that could breathe in fresh air.

Pam had been so surprised by that when she took her first breath following surgery and in time she realized she would never have to use nasal spray again if she didn’t want to. So Paul had given her options with the new nose and later she was able to work out with her husband without losing her breath quite so much.