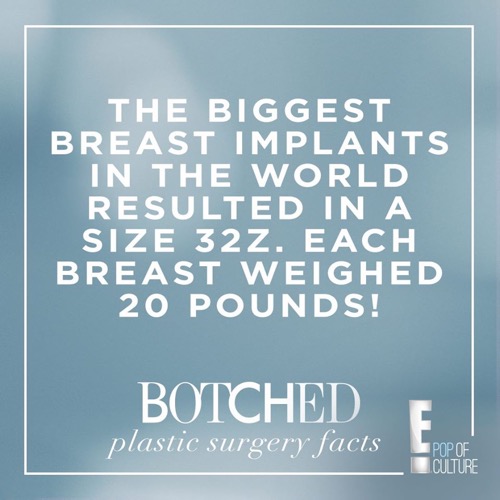 Botched continues tonight with an all new Tuesday, June 14 season 3 episode 6 called, “Plastic Fantastic” and we’ve got your Botched recap down below! On tonight’s episode, an ex-Playboy model, who almost died during a procedure in Ecuador, decides to take a second chance on fixing her neck and nose.

On the last Botched recap, Terry operated on a cancer survivor whose gynecologist performed her tummy tuck; a woman who had been teased about her nose since childhood underwent reconstructive rhinoplasty; and a Brazilian “human doll” consulted the doctors after botched chest implant left him looking less than perfect. Did you watch the episode? If you missed it we have a full and detailed recap, right here for you.

On tonight’s episode as  per the E! synopsis “an ex-Playboy model, who almost died during a procedure in Ecuador, decides to take a second chance on fixing her neck and nose; Terry tries to help a nurse with one big boob instead of two; and reality star Angelique Morgan asks the docs to make her even more “plastic fantastic.”

Tonight is going to be another crazy episode that you won’t want to miss, so be sure to tune in for our live coverage of E!’s “Botched” tonight at 9PM EST! Meanwhile, while you wait for our recap, hit the comments and let us know how excited you are about this season 3 episode 6?

Kathy was who was a former model and current event planner had gone to see the doctors on tonight’s all new episode of “Botched” because she had made the mistake of going to Ecuador for a face lift.

Kathy had apparently had a friend from that country who recommended going there for surgery because this friend had supposedly had an awesome doctor there who wasn’t all that expensive. So at first Ecuador had seemed like a great idea to get what she needed and save money. However, things quickly changed the second Kathy met the doctor. Kathy had originally gone to that country for just a facelift yet her doctor was able to convince her that she needed to touch her nose as well so she let that man talk her into doing more than she had planned on. And he butchered her.

Kathy’s nose was raised too high and the doctor had technically broke some of her bones in order to give her what he thought was a perfect nose. Yet, the facelift was just as bad. Kathy had wanted him to remove the lines under her chin and somehow he gave her even more wrinkles than she had before. So the doctor had basically done a hatchet job, but he almost killed her by giving her medication that she wasn’t supposed to have. Which sent her to the hospital where she nearly bled to death.

So what Kathy really needed more than anything was a break. She wanted to fix her nose and see if the doctors could do anything about the lines the previous doctor had given however she was being very realistic. Kathy’s main concern was her nose and that’s because she’s had trouble breathing in the past so she her mind was focused on what was best for her health. But the doctors had surprised her when they said they could fix both. Paul and Terry believed they could give her her old nose back and they promised to do something about her face which was what she had initially wanted to work on anyways.

Kathy’s case though could have been easily fixable if she hadn’t kept changing her mind. Kathy had said that she wanted her old nose and that wanted to breathe better. So Paul hadn’t thought that was asking much. However, Kathy then told Paul right before surgery that she didn’t want a big nose so that had left Paul confused because he had seen her old nose and knew that it was big. And so Kathy almost turned a little problem into a complete guessing game.

Though Kathy wasn’t the only one that had left her doctor stumped. Another patient had gone to the guys and she had asked for the impossible. Frenchy who some might remember from “Rock of Love” had gone to see Paul and Terry about redoing her chest. Frenchy felt that her current implants were too small because they moved off to the side when she laid down and she had also thought she had far too much scarring around her nipple yet the only problem that Frenchy had was with her herself and the way she viewed her own body.

Frenchy’s friend had seen the scarring and she had said that Frenchy was making a much bigger deal of it than what was really there. But the thing about her chest being small is just a misconception. Small breast don’t slide off to the side, large ones do. So it didn’t make any sense for Frenchy to go bigger much less asked for a thousand CCs. Terry later told Frenchy that there was no such a thing as a thousand CCs and for some reason she refused to believe him.

Frenchy felt that if she asked a doctor that he would have to come through for his patient, but at the end of the day Terry wasn’t going to be moved so she had to walk away disappointed. Only she did say that she saw the doctors’ point so hopefully she won’t change her mind and continue looking for some other doctor to give her what she wants at a later date. Yet, while Frenchy tested Terry’s patience, Terry never had to perform a horribly complicated surgery on her like he did with Serena. Serena had gone to the guys because she had a uniboob and to make things even more complicated she wanted to fix her chest as well as maintain her size.

Serena had grown up in a family of women that have a big chest however the gene managed to somehow skip her. So when Serena got older, she booked herself for breast implants and unfortunately there was a problem from the very beginning. Serena had woken up after surgery feeling like her chest muscles were being torn from her body so she had tried to warn her doctor about it. Though he had dismissed her early concerns and then later he said well at least she won’t become a stripper after seeing the uniboob he gave her.

So Serena had an overall bad experience with her former doctor, but Paul was able to finally give her what she wanted. Paul had put her under the knife and he had fixed the uniboob which was her biggest concern because it made her feel self-conscious. Unfortunately, Serena had still a been of symnastia during those first few days after surgery yet that eventually cleared up and she was able to later go out with her friends in a dress that wasn’t covering her up anymore.

But Kathy’s nose wasn’t exactly what Paul was aiming for. Kathy’s face was perfect after surgery so she no longer had anything to worry about there however her nose wasn’t as low as Paul wanted it to be. He said her skin had been too thin to go for what he wanted so he stopped just short at where he wanted it to be and that way she got her old nose though not as big as it once was.