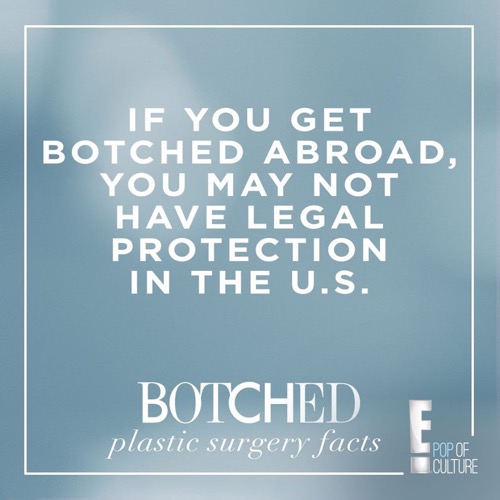 Botched continues tonight with an all new Tuesday, June 7 season 3 episode 5 called, “Super Fupa” and we’ve got your recap down below! On tonight’s episode, Terry operates on a cancer survivor whose gynecologist performed her tummy tuck.

On the last episode Paul helped a female impersonator who wasn’t comfortable walking the streets without makeup; a woman with “sideshow boobs” went under the knife to improve her marriage. Did you watch the episode? If you missed it we have a full and detailed recap, right here for you.

On tonight’s episode as  per the E! synopsis “Terry operates on a cancer survivor whose gynecologist performed her tummy tuck; a woman who has been teased about her nose since childhood undergoes reconstructive rhinoplasty; and a Brazilian “human doll” consults the doctors after botched chest implants leave him looking less than perfect.”

Tonight is going to be another crazy episode that you won’t want to miss, so be sure to tune in for our live coverage of E!’s “Botched” tonight at 9PM EST! Meanwhile, while you wait for our recap, hit the comments and let us know how excited you are about this season 3 episode 5?

The doctors met a young woman suffering from what she called Supa Fupa on tonight’s episode of “Botched”.

Samantha had apparently gone to her gynecologist because she was experiencing her period more than once in a month. So the doctor had taken a look to see what was going on and she had found an overlarge cyst pressing against Samantha’ uterus. And with a situation like that, the best course of action to take was a hysterectomy. Which Samantha did do, but the doctor had ended finding a cancerous thyroid during Samantha’s hysterectomy so that left Samantha on edge.

Samantha has had several family members die from cancer so the word along was enough to frighten her and made her think that she was going to die. However, the doctor hadn’t been all that concerned about the cancer because she had offered Samantha a tummy tuck on a discount. So Samantha had actually gone ahead with the tummy tuck before her doctor finally decided to take care of the cancerous thyroid.

And so that right there was slightly unethical. The doctors said that Samantha’s gynecologist was just being greedy when she decided to do a tummy tuck before dealing with the tyroid. Only Samantha hadn’t known that at the time so she had trusted this other woman to help her and in return she was left botched. Samantha’s stomach had a fupa which was really leftover fat underneath the tummy tuck scar that the doctor hadn’t bothered to touch.

So that would alone would have made her self-conscious, but the one thing that truly made her tummy tuck a fail was the fact that there was smelling fluid leaking out of her belly button. Samantha could smell it and so could others. But Samantha said the actual smell was close to what a dead body would smell like and it turns out she wasn’t that far off the mark. The reason the belly button smelled liked it was dead was because it was dead.

Samantha’s belly button had died not long after her surgery so Terry automatically knew that he was going to have to create a new one for her. Much like what Paul had to do for another patient of theirs. Who needed an all new nose.

Edra it seems had had a nose job because she had felt her original nose was a little too big on her face however trimming it down doesn’t appear to have done her much good. Edra’s nose had been made slim so she did get what she wanted in that respect, but the nose had been left drooping. So she was suffering from what was called a Nose Fall. And there was a real concern that the end would just fall if left untreated.

So Paul had to tell Edra that he could help yet it would come at a cost. Edra’s nose would have to be enlarged in order to stop the drooping so that meant he was going to have slightly undue everything she liked about the last surgery. Though neither Paul nor Terry had easy time of it in surgery. Paul had gone in believing that it would be easy and instead he found some damage in the cartilage because he had been left drooping for so long.

And so Paul found himself having to reconstruct the entire tip of her nose. He had a first attempt that wasn’t all that good and he had a second attempt that was only slightly better. So Paul literally had to spend extra time in the operating room to construct a nose for Edra that wouldn’t veer in any one direction and on the third try he believed he finally got that.

Meanwhile Terry had to both fix the botch leftover from Samantha’s last tummy tuck as well as finally give her a real tummy tuck. It seems there had been far too much fat leftover in Samantha’s stomach for someone that was supposed to have had a tummy tuck. So technically Terry had to give her a new tummy tuck to cover what was the other one had blatantly missed though he got lucky with the belly button. He had found Samantha’s belly button buried beneath and so all he had to do was bring it back to surface.

But while the doctors could take on a new nose as well as a new stomach that both looked great once they had time to heal, they apparently couldn’t help Mauricio realize that he was handsome just the way he is. Mauricio was a Brazilian model and he liked to call himself the Human doll so looking perfect had become something of a brand for him. Only Mauricio had tried out chest implants as a way to give himself a chest and the doctor had botched him. The doctor had put the implants in wrong and unfortunately they had a ripped a muscle.

So Mauricio had been warned not to get a new set of implants in and he decided not to. However, Mauricio wanted to fix his chest because having the implants taken out had left his skin with some damage so he had asked the doctors what could they do and it turns out not much. The doctors could fix his chest, but it would leave scars and Mauricio didn’t want scars to interfere with his modelling career.

Only, once they all agreed they couldn’t help him with his chest, they did their best to talk Mauricio out of the other surgery he wanted. Mauricio wanted to take several ribs out as a way to make his chest look better. So although the doctors weren’t able to convince to completely let go of the idea, they did at least get Mauricio to reconsider having his ribs taken out without good cause. And for now that has to be enough!