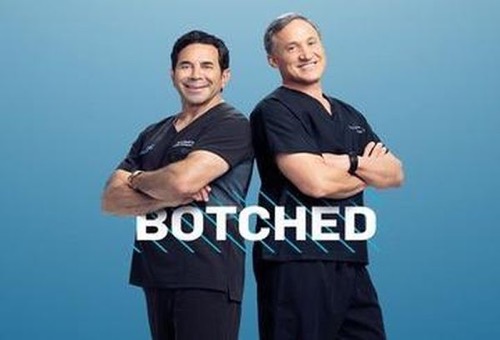 Botched continues tonight with an all-new Tuesday, June 28 season 3 episode 8 called, “Totally Waist-ed” and we’ve got your Botched recap down below! On tonight’s episode, a man who wants his ears back receives Dr. Nassif’s assistance; Dr. Dubrow takes on a botched butt implant.

On the last episode, a fitness enthusiast who’s addicted to nasal spray wanted Paul to fix her nose, while a woman with deflated boobs came to Terry for help. Did you watch the episode? If you missed it we have a full and detailed Botched recap, right here for you.

On tonight’s episode as  per the E! synopsis “a man who wants his ears back receives Dr. Nassif’s assistance; Dr. Dubrow takes on a botched butt implant, and both docs meet with a woman who has had 17 surgeries to make herself look like a pixie.”

Tonight is going to be another crazy Botched recap that you won’t want to miss, so be sure to tune in for our live coverage of E!’s “Botched” tonight at 9PM EST! Meanwhile, while you wait for our Botched recap, hit the comments and let us know how excited you are about this season 3 episode 8?

Trevor had something called a Keloid Catastrophe on tonight’s episode of “Botched”. Trevor had apparently pierced his left ear one day after asking his mom about it for months so for a while afterwards everything was fine. He had his pierced ear and he was happy. But then Trevor developed a keloid on his left ear. A keloid being type of scar tissue that could form over time and that would continue to grow of left untreated. So Trevor had been quick to have it removed before the keloid could cover most of his ear.

However, Trevor’s keloid merely grew back after it had removed. So Trevor had had to go through surgery a second time in order to remove the second keloid however he hadn’t gone to a back to his first doctor or even a dermatologist for the second surgery. Trevor had actually gotten his second keloid removed by an oral surgeon who had known his mother and had offered a discount. Discount being one of the ugliest words anyone could use when it refers to cosmetic surgery because a good job was never going to come with a discount.

So the keloid did end up growing back on the left ear and to make matters worse Trevor had also made the mistake of trying to pierce his right ear to see if he could get a different result, but that’s how he ended up getting a keloid on his right ear. Yet, many years have passed since he had the keloids and Trevor for one was tired of trying to make the best of it. The Keloids have interfered with his career and his dating life so he was just wanted them gone. He later told Paul and Terry that didn’t even matter if all they could do was shrink it down, he merely wanted some semblance of normal.

And so Paul decided to help Trevor. He took Trevor into surgery where he made incisions down each keloid in order to reach the keloid mass itself. So he was able to remove the mass and for the most part use the remaining skin to reconstruct Trevor’s earlobe. Though one ear, Paul had funnily enough ran out of skin. He said that the keloid had eaten away at most part of one of the ears so he had to borrow skin from the keloid to give Trevor something. Which wasn’t perfect

But later one patient came in that neither Terry nor Paul believed they could help. A young woman who was set on making herself into a Human Cartoon had apparently gone to them because she had wanted them to do a butt lift as well as a new surgery she called hip implants. Pixee had said that she always wanted to be different and that being a Human Cartoon was going to make her happy however the young woman had clearly gone above and beyond to pursue her goal.

Pixee was twenty-five and looked older. She had gotten surgery on her eyes to give her the anime look and she had had six ribs removed in order to give herself an hourglass figure. However, the big breast implants she got were also ruining that ideal. Her much larger chest made everything south of it look smaller so that’s why she needed a bigger butt and bigger implants. So common sense would have been for her to reduce her chest to achieve the hourglass look she wanted and yet her mind refused to believe that she couldn’t have the surgery she wanted.

Pixee had been told by the guys that she had already gone too far with the amount of procedures she had done and that anymore would just distort her body, but she merely didn’t care about their professional opinion. She said that she would look hot after it was done. So she kindly accepted what they had to say with a smile and then admitted that she would find another doctor to give her what she wanted. And so tonight’s episode would probably won’t be the last that we’ve heard from her.

Yet, the guys had fit in one more patient on tonight’s episode and all she asked from the guys was if they could salvage something of her butt implants. Misty had spent nearly twenty years in Miami Beach and there she had come to glamorized women with the big chest and the even bigger booty. So later Mistry decided that she should have plastic surgery and she went with getting a butt implant after a certain job down there required that she had to fit into a skimpy pair of shorts and convinced her that she should get what she believed all the other women have.

Misty though had had problems with her implants from the beginning. She had developed an infection right at the start and her doctor hadn’t done anything even as the infection continued for two years. So it wasn’t until after the infection finally cleared up that the doctor tried to fix what he had done with the uneven butt implants and that second time hadn’t been that much of an improvement. The implants were still too high up on Misty and she still had what she called a Lopsided Derriere.

So Misty’s chances at keeping the implants were already low when she went to see the doctors and it had been Terry first priority to deal with the pain that she had been experiencing. Misty said that it was painful to sit down so Terry knew going into surgery that he was going to have to remove the implants altogether in case they were sitting on a nerve. But Terry still try to do his best with Misty. He had given her an internal butt lift which was something new that he had explicitly tried out just to give Misty a new butt without all the scarring.

And yet Misty wasn’t happy with the result of her butt. She had less of butt admittedly because Terry could only make it symmetrical and a lift wasn’t the same as an implant. However, Misty wasn’t happy because she missed having a butt and not having to work for it. So she began to miss those implants during recovery and months after she had healed she had actually gone back to Terry and Paul to ask them for the implants.

Only they told her no. The guys said that she would be a high risk because she had already developed all of the infections she could have with her last implant so another set of butt implants could serious impair her health and that’s what they had to think about first. The guys said that they were doctors and that they had sworn to first do no harm so they refused to give Misty a new set of implants and that meant she would have to hit the gym if she wanted the big booty back.

Though in spite of Misty’s experience, Trevor at least was happy with his new set of earlobes. He had walked with confidence after the bandages were taken off and that confidence had allowed him to come outside a little more often. So while the doctors couldn’t give everyone what they wanted, they were to able to give Trevor his life back.