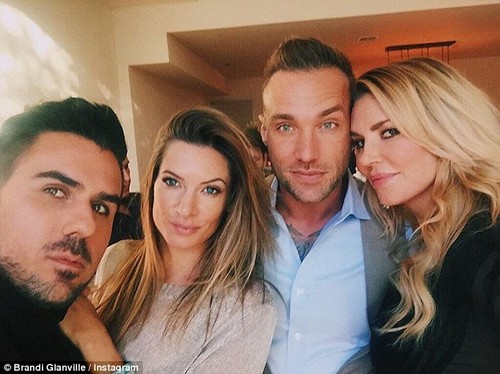 Brandi Glanville is dating Lindsay Lohan’s ex-boyfriend Calum Best. Is this real love or is the couple together to boost ratings for the E! reality show Famously Single?

Glanville hasn’t been able to maintain a happy and healthy romantic relationship since Eddie Cibrian walked out on the marriage to be with LeAnn Rimes. But Brandi seems to think this relationship with Calum could quite possibly be the real deal.

Speaking with OK! magazine Brandi Glanville opened up and revealed that she hasn’t “felt this way about anyone since my ex.” But both Glanville and Best have made careers out of staring on reality shows, so who knows if this is the real deal or what.

Is Brandi putting it all out there, which is typical of the best-selling author, so that fans will watch the new E! unscripted show? Basically what the network has done is take a bunch of reality television stars and put them in a house together to see if romance blossoms.

Guess who met while living together in the downtown Los Angeles loft where the series was filmed! Yep, Brandi Glanville and Calum Best! They’ve been together since November – which is coincidentally is when filming began for Famously Single!

Are we buying this Glanville-Best awesome romance! Brandi would probably do anything to get back on television and stay there after being booted from “RHOBH.”

And this isn’t Calum’s first go-round with reality television. He was on the U.K. version of Celebrity Big Brother. What other reality shows does Best have on his resume? He’s apparently quite popular in Britain – Best has been on Fool Around With, The Match and Celebrity Love Island.

Calum has an impressive list of girlfriends – Kimberly Stewart is on that list with Lindsay Lohan. And trouble plagues Best wherever he goes – the guy loves to have a good time!

This is Brandi Glanville’s dream guy? Sources divulged Calum Best isn’t ready to settle down and Brandi is going to get her heart broken yet again. Or maybe not, if the twosome is just together to ensure Famously Single gets high ratings. Maybe Brandi and Calum could get a spin-off show?

Can you see the trouble in our grins?! @deansheremet and I get deep 💋#eatyourheartout LOVE his new cook book and this human! Podcast airs Monday am!!!