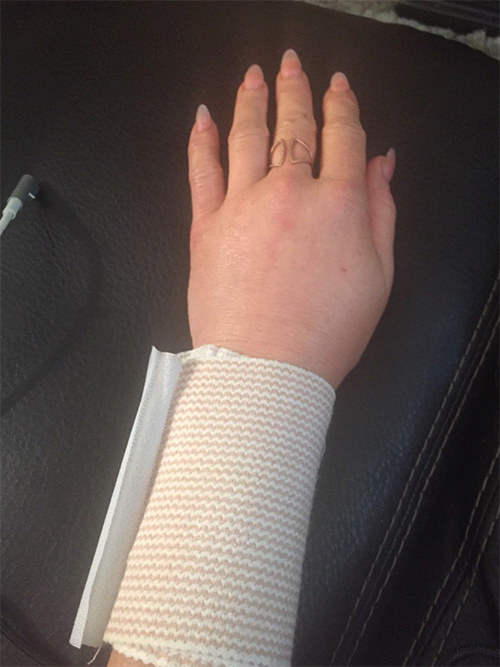 Complete with stitches and a fracture, Real Housewives of Beverly Hills star Brandi Glanville got drunk and attempted to ride a hoverboard, which resulted in a disastrous ending. The Unfiltered Blonde has managed to make a fool of herself once again. And to add insult to injury, she is posting her wounds on Twitter for all to shake their heads at.

The Real Housewives star is the creator of Unfiltered Blonde. It’s a California chardonnay that, well, she should lay off of for a bit. If you spend any time at all looking at the Twitter feed of Glanville, you will quickly realize that the reality star needs a reality check, and not the kind you can tune into on prime time TV. Girl is always hitting that dang bottle and yapping it up on social media to her own demise. From pissing off Eddie Cibrian and Leann Rimes to stirring the drama pot on Real Housewives of Beverly Hills…girl lives on liquid courage.

The ambitious blonde was clearly in a chardonnay haze when she attempted to ride on a hoverboard. Yes, you can cringe. It did not end well. Brandi Glanville landed in the emergency room with a hairline fracture and stitches. She naturally had to share the gore with her fans on social media, tweeting, “Swollen paw 6 stitches I’m officially done with iWalk slash hover board.”

The day following her accident, she continued with the updates, posting another picture to social media with the caption, “Antibiotics equals no alcohol, allergy to pain meds equals pain, 6 stitches & a hairline fracture #priceless”

Let’s be real. We know that the biggest issue Brandi Glanville is facing here is having to lay off the wine while she’s on meds. Brandi firmly believes that it’s not fun to be sober. She even branded that fact on a shirt she sells on her merchandise site. How will she ever get her chardonnay fix? Pretty sure she will live and this may even give her a clear mind long enough to reflect on her life and um, choices. A dry week or two may be the best thing that’s ever happened to the RHOBH star. We can hope, right?

Do you guys think that Leann Rimes and Eddie Cibrian, (along with many others) found some guilty pleasure in seeing Brandi Glanville wreck herself? I know I giggled! There is this little thing called karma, and man, when it comes around…watch out! It’s a powerful force…just ask Brandi!