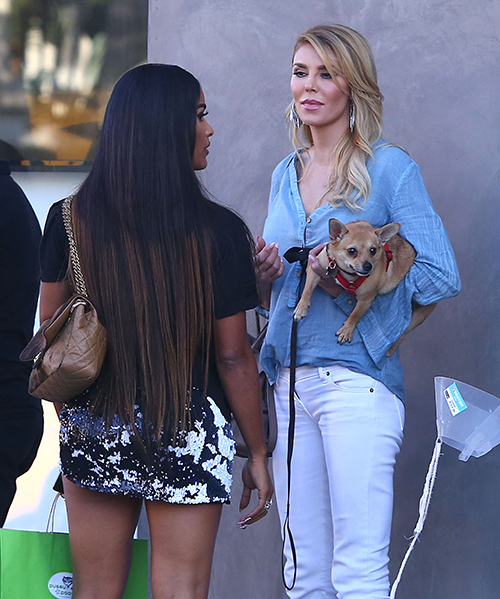 The always controversial Brandi Glanville was reportedly spotted this month filming some scenes for Real Housewives of Beverly Hills, which is pretty strange seeing as how Bravo supposedly fired her. Now, it is looking like Brandi may have just been demoted to recurring status rather than an actual housewife and may not have been entirely fired. Of course, we haven’t seen the footage yet, so there is a good chance that her “filming” means we will just see Brandi in the background at a few parties.

Since Brandi Glanville quit/was fired/was apparently rehired/was demoted from The Real Housewives of Beverly Hills no one can seem to get a straight answer out of Brandi regarding her status at the Bravo reality TV show. First, she tried to make it seem like she had chosen not to return, and then it was clear that it wasn’t her choice at all. Now, Brandi is implying that she is “back” – but is leaving out the fact that she isn’t “back” as an actual housewife.

Fellow Real Housewives star Mauricio Umansky, the husband of Kyle Richards, is calling Brandi out on her misleading retweets on Twitter and according to him, Brandi is NOT a housewife anymore. TMZ caught up with Mauricio when he was leaving an upscale restaurant and the reporter asked him how he felt about Brandi’s big return to RHOBH. At first Mauricio was confused, and had heard nothing about Brandi coming back – then he laughed and told the cameraman that he “calls bullshit” and the stories aren’t true.

Brandi of course took to Twitter, and ranted that Mauricio could “suck it and by it he knew what she was talking about.” Somehow, Brandi and Mauricio’s feud turned into a frenzy on Twitter – and Brandi’s followers were certain that she was hinting that Mauricio was cheating on Kyle Richards again, and that was what she meant by the cryptic tweet.

SO, in a nutshell – we still have no idea whether or not Brandi is really returning to RHOBH because she can’t seem to give anyone a straight answer about it. But one thing has not changed: Glanville still loves stirring up unnecessary drama on Twitter. Do you think Brandi is returning? Or do you call bullshit like Kyle’s husband Mauricio? Share your thoughts in the comments below!