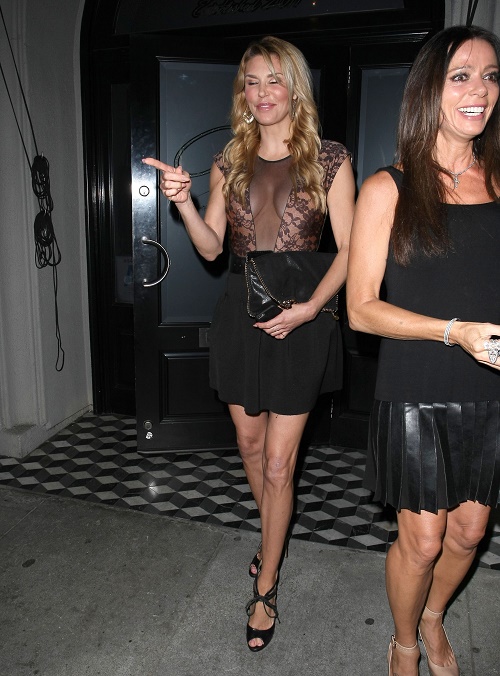 Brandi Glanville was recently fired from Real Housewives of Beverly Hills, although there is still some confusion about what exactly went down because if you ask the RHOBH star she left on her own accord. When rumors of Brandi exiting the Bravo reality TV show first popped up, word on the internet was that Brandi was going solo and getting her own spin-off. At this point, we have no idea what to believe, but if you ask Brandi, a spin-off is totally happening and she already has a name for it.

It’s unclear whether or not Brandi’s spin-off is an actual reality TV show, or possibly a sitcom based on her books in which she will be starring – one thing is for sure though, the RHOBH star has parted ways with Bravo and if the show does exist it will be on a different network. On Monday, July 20, Brandi tweeted out this message to her followers, “Coming up with the creative for the new show, possible title ‘damage uncontrolled.’”

Since Brandi Glanville parted ways with Real Housewives of Beverly Hills, she has been a hot mess, for lack of a better term. First she got herself in some hot water by drunkenly tweeting some pretty messed up stuff about transsexuals. Then, she was caught on video leaving a club so drunk that she literally fell on her butt. So, it’s anyone’s guess if there is a new show – or Brandi has just been drinking and tweeting again. One thing is for sure though, the former Real Housewife is going above and beyond to keep her name in the media and generate a buzz for her “show” – which could just be a figment of her imagination.

What do you think Brandi Glanville is up to? Is there really a spin-off show? Or does she need to lay off the booze and stop hyping up her fans for something that might not even happen? Let us know what you think in the comments below!