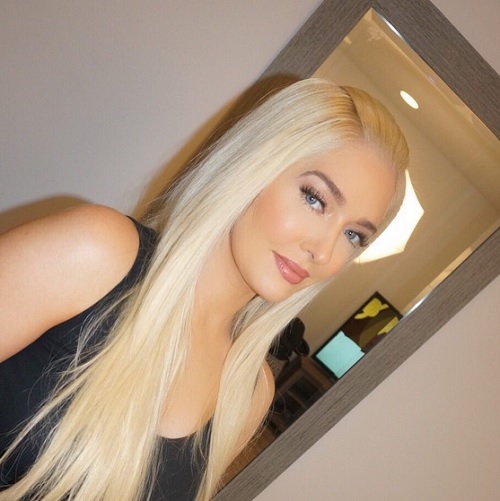 Real Housewives of Beverly Hills casting rumors have been running rampant since it was confirmed that Brandi Glanville and Kim Richards were fired from the Bravo reality TV show. And with Yolanda Foster’s longtime battle with lyme disease, which has grown serious over the course of the last few months, it is unclear whether or not she has been filming since the Bravo cameras arrived in Beverly Hills last month.

With Brandi Glanville and Kim Richards definitely out, there are some empty slots on the Real Housewives of Beverly Hills cast, and E! News has confirmed at least one of the new cast members. According to E! News, Bravo has tapped singer Erika Jayne to star on Season 6 of the reality TV show. You will most likely recognize Erika from her 8 songs that have topped the Dance Music Billboards over the years, and she is reportedly also close friends with Yolanda Foster and her hubby David.

An inside source dished to E! News on Erika Jayne joining Season 6 of RHOBH, “She brings a young energy. And she has sex appeal. She’s married but she loves to party and have fun.” It is still unclear whether Erika Jayne will be a fulltime housewife, or just a friend of the cast – but seeing as how both Brandi and Kim are gone, she will most likely be filming full time. Rumor has it that Erika won’t be the only new housewife on Season 6 though. Alum Taylor Armstrong has reportedly been called back to the Bravo reality TV show and has also been filming with the other housewives.

Do you think that Erika Jayne will be a good addition to the Real Housewives cast? What about Taylor Armstrong, are you happy she is returning? Or would you rather she stay gone? Let us know what you think in the comments below!