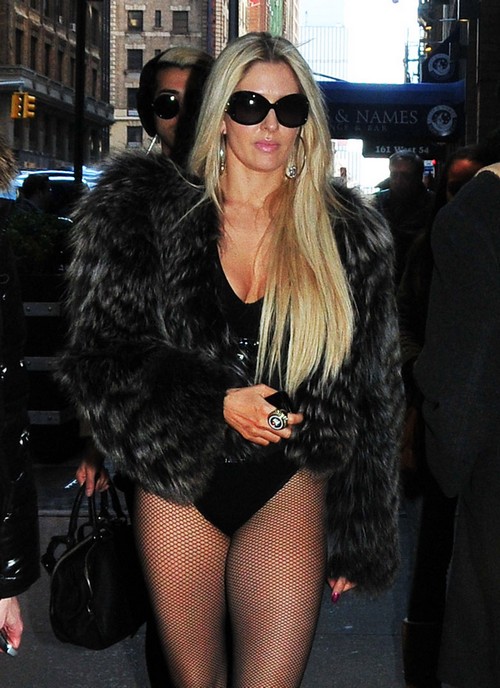 Erika Jayne is the new hire on The Real Housewives of Beverly Hills. Now that Brandi Glanville has boozed her way off of RHOBH, followed by Kim Richards who has fallen off the wagon and has been busted for drinking and shoplifting and is reported to be living out of her car, it’s time to bring in some fresh air to RHOBH. Meet Erika Jayne, the latest Beverly Hills housewife to join the cast – according to In Touch Weekly

Erika Jayne is a friend of Yolanda and David Foster and will be featured prominently on the upcoming sixth season of Real Housewives of Beverly Hills along with returning cast members Kyle Richards, Lisa Vanderpump, Yolanda Foster, Lisa Rinna, and Eileen Davidson. Rumor has it that Yolanda Foster will continue to have a smaller role as her health struggle with Lyme disease goes on. However, Yolanda tweeted just today that she found out her leaky breast implants were aggravating her medical condition and that having them removed should improve her health.

Perhaps by the time season six hits its stride, Yolanda Foster will be well enough to share more on screen time with her pal and latest cast member Erika Jayne. So other than being best buds with Yolanda, who exactly is Erika Jayne? She’s not exactly a household name, at least outside of Beverly Hills. Jayne is a singer, known primarily for club music, who has had six back to back #1 dance hits. The blond bombshell is originally from Atlanta, not Bev Hills, and regularly performs at nightclubs with other hot stars like Flo Rida.

Jayne says her music centers on “glitz, glamor, and fun” and that sounds just like what Real Housewives of Beverly Hills is all about. One of her biggest hits – A Pretty Mess – sounds more like past RHOBH cast members Brandi Glanville and Kim Richardson. Hopefully Erika Jayne will be more fun and much less mess than those two who both turned out to be a pretty sloppy mess in RHOBH season five.

Erika Jayne is a perfect fit for Bravo since she regularly performs in gay nightclubs and has a large gay following – Andy Cohen must love her! Jayne should be a breath of fresh air for RHOBH since she’ll be the only under 40 cast member. And if you wonder how a pop singing sensation ranks as a Beverly Hills housewife, here’s where Erika Jayne’s story gets really interesting – she’s married to high powered LA attorney Thomas Girardi who is a whopping 76 years old!

Girardi is considered LA’s king of the class action lawsuit and if his name sounds familiar, he’s the guy who worked with Erin Brockovich and won $333 million for the residents of Hinkley, California. Erika Jayne definitely has a life that should be fascinating to watch on RHOBH whether she’s frolicking at a club performing one of her hits or living the glam life as a philanthropist wife of a big time LA lawyer. Can’t wait to see the new season.

In Touch Weekly reports this from a RHOBH insider: “She loves that they’re going to show both sides of her life, the serious side during the day and performing in gay bars at night. It’s going to be a crazy season.” Be sure to tune in to CDL for live recaps of Real Housewives of Beverly Hills every week.