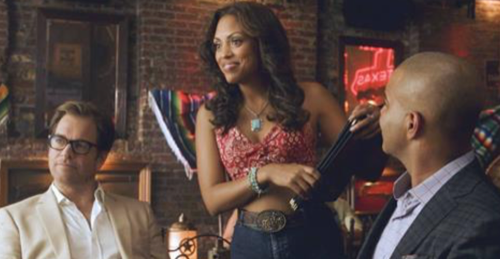 Tonight on CBS their new drama Bull inspired by Dr. Phil McGraw airs with an all-new Tuesday, October 18, 2016, episode and we have your Bull recap below.  On tonight’s Bull season 1 episode 4, Bull (Michael Weatherly) and his team visit a small Texas town that was the site of the only trial loss of his career.

Did you watch last week’s Bull premiere episode where Bull (Michael Weatherly) and his team tackled jury bias against their client, a woman on trial for the murder of a star athlete she very publicly accused of assaulting her?  If you missed it we have a full and detailed Bull recap of the last episode, right here.

On tonight’s Bull premiere episode as per the CBS synopsis, “When Bull and Trial Analysis Corporation (TAC) help a young woman fight a drug patent lawsuit, they’re forced to travel to Callisto, the small Texan town where Bull suffered the only trial loss of his career.”

Kerry Ketchum is the client of the week. She’s an untrained medical genius who saved the life of her sister in the ER with a drug she created in her own lab. She’s known as an angel, but one CEO by the name of Windermere is suing her, saying he created the drug she’s taking credit for.

Bull meets with Kerry at the hospital to see if he can help her. She’s there with her sister. She talks about her drug, an orphan drug that lasts longer than a year for hemophiliacs. The trail will take place in Callisto, Texas, a place where Bull last a case. He’s not looking forward to going to the Devil’s armpit, a place where they will all be sabotaged. He gives a speech to the team – who thinks he is losing it with his doom and gloom about a city – as they pack up to take their equipment there.

As soon as they arrive, bad luck begins. Now they believe Bull! A friend of Bull’s and a local named Merle picks up the team is his truck. Before they leave, they meet Diana, an old partner of Bull’s and an old flame.

The gang is staying at a farm with chickens and all. Bull coaches Kerry about how to get the jury to fall in love with her. Out to lunch, the crew decides that a local lawyer on their team would win the case for them. They enlist Merle, who has a law background but no real court experience.

A tornado warning has the judge asking for a call of hands – who can be impartial? And that’s how court goes in Callisto. On the way to the basement, Lindsey asks Bull if he wants to settle? And right in front of the jury. Bull doesn’t want them to hear so he asks her out for drinks later.

At the bar, Diana makes it clear that she has a thing for Bull and she is also ready to win. Meanwhile, the team finds evidence to support that Kerry is a liar. She clearly isn’t an angel the public thinks she is.

The team talks with Kerry. She talks about how she finished the job he started. She signed a legally binding contract. His invention was inferior so she worked hard to make a drug that would work.

On to court for opening arguments. Diana thinks she’s winning over the jury with all her scientific talk, but they all look confused. Merle decides to cut his portion short so they can all get to lunch.

The team needs to let lose. They hit the local bar where Diana shows up. She shares some old stories about Bull, his love for tequila and the last case they worked on. Bull and Diana leave the bar and head out for a walk with a bottle.

The gang heads back to the barn where they discover that there laptops are missing, papers are scattered everywhere. Meanwhile, Bull wakes up pants-less in an open field next to a cow. It looks like Diana knows how to shake things up for the team. They even stole Bull’s notebook which were full of notes. Bull has a plan however.

Kerry gets on the stand. She tells the jury about how her sister was just 4 when she gave her blood to Windermere so he could experiment. Kerry and Windermere argue, making the jury turn their heads. On to a recess.

Ready to close the case, Bull has something up his sleeve. A tornado warning breaks up the session with everyone headed to the shelter. On the front steps, Bull laughs at Diana when she shows him a video of the tornado warning. The weather girl is a Bull team member who pulls a fast one with a makeshift backdrop of the woods while a hose sprays her down in her rain suit.

In the shelter, Kerry and Windermere are put in the backroom where they talk. Their conversation travels through the vents and right into the ears of the jury.

Windermere drops the case. Bull is disappointed that it wasn’t an official win, but he’s still happy. Happy that he left Calisto a loser but a winner because he found his team, people he can trust and share his successes with.