Caitlyn Jenner Plans to Steal Cher’s Style and Copy Cindy Crawford’s Mole as She Tries to Perfect Her Post-Transition Look? 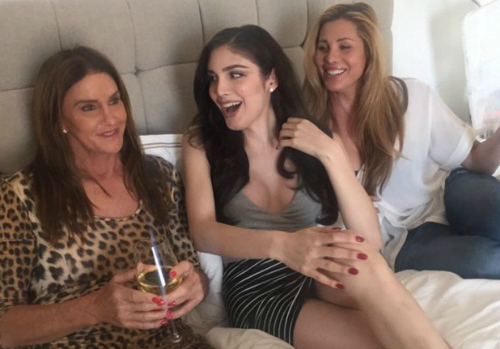 Caitlyn Jenner reportedly has long viewed Cher as a fashion guru and wants to copy her signature look, according to The National Enquirer. A source reveals that Caitlyn is so obsessed with the entertainer’s look that she has tried to buy gowns that the singer no longer uses.

Apparently, Jenner begged Cher to sell her some of her “outdated” dresses and outfits so she can copy her look and style. Reportedly, Cher sympathized with the reality TV star and gave her a dozen or so outfits “for charity.”

Caitlyn Jenner has struggled to find her own style since she announced she was a transgender person and would no longer be known to the world as Bruce Jenner. She has gone through many different looks, and it sounds like she may have decided that she and Cher share the same fashion sense.

It looks like Caitlyn may face some difficulty getting the perfect look, though. Jenner found when she tried to wear Cher’s clothes that they didn’t fit as well as she hoped. She took them to be altered to fit her body, and vowed to go on a strict diet to do justice to Cher’s outrageous and flashy clothes.

If buying Cher’s clothes wasn’t shocking enough, In Touch Weekly claims that Caitlyn has contacted a plastic surgeon about copying Cindy Crawford’s signature facial mole. The tabloid reports that Jenner said the beauty mark was a symbol of feminine beauty.

Let’s be honest, when you compare pics of Cindy Crawford against Caitlyn Jenner, there are many similarities, but they are not a match by any means. However, one source revealed, “Caitlyn thinks she is a dead ringer for Cindy, and she’s certain the whole world sees the resemblance too.”

Apparently, Caitlyn was thrilled when the tabloids started comparing her Cindy Crawford and began making plans to complete her look by getting a mole added to her face just like the one Cindy Crawford has, but this could be just tabloid talk.

A source close to Caitlyn reveals that Jenner was not able to purchase any of Cher’s clothes, but it wasn’t for lack of trying. Cher’s rep reportedly said that the actress/singer’s style “is not for sale.” What do you think? Is Cher’s style something for Caitlyn Jenner to emulate or is it too extreme?

Stick with CDL for the most up-to-date coverage of the latest celebrity news.