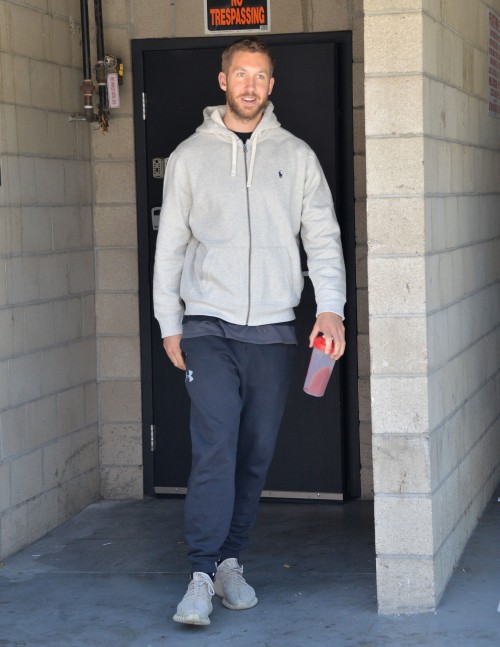 Calvin Harris is not taking his Taylor Swift breakup well particularly since news broke of her meeting Tom Hiddleston’s parents in the UK. In fact, Calvin is so annoyed with that news plus paparazzi questioning him on the split that he almost ripped the door off of his luxury SUV.

This story has lots of interesting moving pieces. First is that Taylor Swift and Tom Hiddleston’s relationship is either moving really fast or it started up while she was still with Calvin Harris. Reportedly, Calvin is angry and hurt at how fast Taylor moved on and has his suspicions.

Second is that Taylor took Tom Hiddleston to meet her folks then they hopped in her private jet, crossed the pond, and went to Stafford UK to meet his parents. What’s shocking about that is she NEVER MET Calvin Harris’ parents in the more than a year that they were dating.

According to TMZ, Calvin Harris says Taylor Swift going to meet Tom’s parents is “f-king laughable” since he asked her several times to meet his but she said they lived too far away. What does “too far away” mean to a woman who travels the world on concert tours and owns her own plane?

TMZ also said that when Calvin heard about Hiddleswift’s meet-the-parents outings he was “bewildered and astonished.” What makes this so much harder onthe DJ is that the paparazzi won’t leave Calvin Harris alone and seem to delight in updating him on the latest T-Swift news.

When the UK deejay was leaving the gym in Beverly Hills this week, he got flustered by a swarm of photographers, accidentally left his back door open and then went to back up and nearly ripped it off his hinges. Both Calvin and his SUV were clearly unhinged by this encounter.

After Calvin went off on the photogs, he later tweeted an apology that said he got “mad as hell” then said sorry and added he knows they’re just “doing your job.” That’s a pretty respectable and humble mea culpa. Clearly, this breakup is not going as well for Calvin as it is for Taylor.

As things progress, it seems increasingly likely that Calvin is the victim in this split and Taylor might be the villain. So wouldn’t it be great if Calvin Harris turned the tables on Taylor Swift and wrote an epic breakup song about her?

Otherwise, while hanging in LA and working with Rihanna on a new track, Calvin Harris has been very nice to fans, often posing for pics with them and very approachable. But clearly, anyone probing him about Taylor Swift isn’t going to get a warm reception.

What do you think? Did Taylor Swift do Calvin Harris wrong or is he just mad because he got dumped? Do you think Taylor and Tom Hiddleston will last? Share your comments below and check back with CDL often for all the latest celebrity news and gossip.