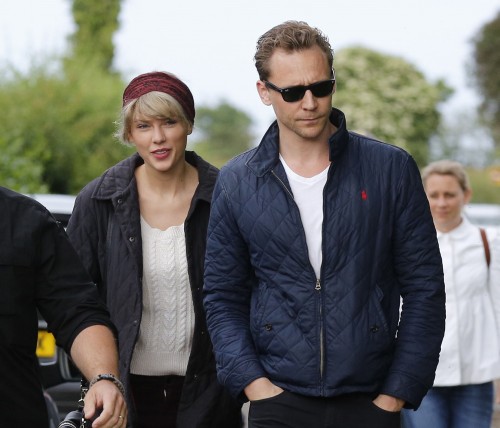 You have to admit Taylor Swift has a track record of burning out fast on guys. Tom Hiddleston may be her latest revenge song lyric victim in record time based on how quickly they are getting serious – meeting the parents and everything. Are they moving that fast or was there a phase of the relationship the public didn’t see because Taylor was cheating on Calvin Harris with Tom?

Taylor Swift likes to seem like a “good girl” but she may have been the villain in her split with the British deejay. Just last week, Taylor took Tom to Nashville, Tennessee to meet pal Selena Gomez at her performance at the Bridgestone Arena there and the two reportedly enjoyed the show and Selena gave Taylor a thumbs up on her new man.

From there, Taylor Swift took Tom Hiddleston to meet her parents, Andrea and Scott Swift, and that seemed like too much too soon. But the real shocker is that Tom took Taylor across the pond to meet his parents and extended family. What is going on? Are Tom and Taylor both falling hard and this is destiny?

Or is this a trainwreck waiting to happen because they’re moving at break-neck speed? Who does a parent meeting within a few weeks of starting to date? Recent photos from the UK show Taylor Swift and Tom Hiddleston beach strolling with his mother Diana Hiddleston and other family in Suffolk.

Taylor looked happy and chatty talking up the Hiddleston clan and looking right at home. More important was the fact that Diana Hiddleston, Tom’s mum, was all smiles. Did Taylor get the Loki actor’s mom’s seal of approval? Things are looking full steam ahead. Maybe this one will work out for T-Swift…

At the rate these two are going, they should be engaged and at the alter in a month – or split up bitterly and Taylor Swift in the studio writing her most epic ex-boyfriend diss track yet. Last year, The Night Manager star Tom Hiddleston told GQ that he doesn’t talk about his dating life.

Tom told the men’s style mag, “One day I hope when there’s really something to write home about, then, I’ll be able to talk.” With that in mind, recall that after dancing with Taylor at the Met Gala in May, Tom said, “I sat next to her at dinner that night and she’s very charming, she’s amazing… and she’s very cool.”

Sounds like there is something to write home about – and he’s talking. Could it be that Tom Hiddleston is just as crazy about Taylor Swift as she is about him? The handsome actor is all things that Taylor likes – he’s tall, he’s hot, and he’s British. Need we say more? Here’s the timeline…

May 2 – Tom and Taylor meet at Met Gala – video of them dancing goes viral – Tom gushes about her.

June 1 – Taylor and Calvin Harris’ breakup news hit the internet and the split may have been weeks ago.

June 14 – Tom and Taylor photographed kissing on the beach near her Rhode Island home.

June 24 – Taylor takes Tom to meet her parents in Nashville.

June 25 – Tom and Taylor fly to the UK to meet his mother and extended family.

This is either a dating speed-record for both Tom Hiddleston and Taylor Swift with just three weeks of dating before meeting their parents – or they’ve been dating on the sly since the Met Gala and it’s more like two months of dating with a few weeks of “cheat-dating” behind Calvin Harris’ back.

What do you think? Are they falling fast and hard? Or did they start up while Taylor was still with Calvin? Either way, given Taylor’s history, Hiddleswift seems doomed to failure. The breakup countdown clock starts now!

Share your comments below and check back with CDL often for the latest celebrity news and gossip.