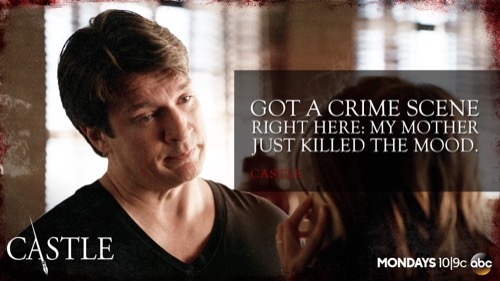 Tonight on ABC Castle starring Nathan Fillion continues with an all new Monday April 11, season 8 episode 17 called “Death Wish” and we have your weekly recap below. On tonight’s episode Castle (Nathan Fillion) and Beckett (Stana Katic) embark on a search for Aladdin’s lamp after a man linked to smuggling Turkish antiques is killed.

On the last episode a clue at the scene of the death of an armored-car driver lead Beckett and Castle back to an old case solved by Esposito. But complications arose when they learned that Esposito might not have been telling them everything about his past with the culprit. Did you watch the last episode? If you missed it, we have a full and detailed recap right here for you.

On tonight’s episode as per ABC’s synopsis, “the murder of a man connected to smuggling Turkish relics sends Castle, Beckett and the 12th Precinct on a search for a stolen antique believed to be Aladdin’s lamp, in hopes that it can lead them to the killer.”

Tonight’s episode is going to be great so be sure to tune in to CASTLE on ABC at 10PM EST. We’ll be blogging all the action, be sure to hit up the comments and tell us how excited you are for season 8 episode 17.

Tonight’s episode of Castle kicks off with a man being held hostage he is covered in blood and duct tape. His captor forces him to write a note – and then kills him.

Meanwhile, Castle and Beckett are trying to “go for round three” and Castle’s mom arrives and crashes their party. Castle’s mom needs his help with her book – she wants a celebrity endorsement, and she has her heart set on Oprah. Castle doesn’t even know Oprah – but he agrees to see what he can do.

Beckett gets a call from the work – there has been a homicide. Castle heads to the victim’s apartment, it’s the man that was killed the night before. His name is Lars Cross and he was a sonar technician for an oil company called Chesapeake Energy. He was working out of the country in Turkey, but he got home a few days because he was fired.

Lani arrives with Lars’ head – apparently he was decapitated, with a Turkish sword. Castle points out that beheading is a traditional form of punishment in Turkey, he compares their case to the book “Arabian Nights.” Castle rushes out of the apartment because Oprah’s assistant is calling him back – he runs in to one of Lars’ neighbors while he was on the phone. She tells Castle that the killer is Lars’ ex-boyfriend Mark – and then the witness seemingly vanishes.

Lars’ sister comes in to talk to the police at the station. She says that Mark was basically stalking Lars. Apparently, Mark helped pay for Lars’ college tuition, and he wanted the money back. Bekett and Ryan sit down with Lars’ ex-boyfriend, he swears that he had no idea Lars was dead. He admits he visited him the night before, but when he left Lars’ apartment he was still alive. Mark confesses that he did take Lars’ laptop as collateral – and he says that Lars was acting strangely and said he had smuggled something back from Turkey.

Esposito returns from the bank – he emptied Lars’ safety deposit box and found $400K in cash. Meanwhile, Ryan went through Lars’ laptop and found photos of Lars inside tombs and extracting artifacts from Turkey and smuggling them back to the US. In the photos Lars is holding what appears to be an ancient lamp with a symbol on it from Arabian Nights. Castle is convinced that Lars found Aladdin’s lamp – and he wished for all of that money and the new Porsche from his Genie.

Castle goes through a box of books that were found in Lars’ apartment – they were the research tools that Lars was using to find King Solomon’s tomb in Turkey. Beckett is not supporting his Genie theory, but she agrees the lamp could have gotten him killed, it was worth millions of dollars.

Castle goes to meet with Dr. Baker – the author of one of the books they found in Lars’ apartment. Castle shares the photos on Lars’ laptop with her. She confirms that the photos were definitely taken inside King Solomon’s tomb. Dr. Baker bursts Castle’s bubble – and laughs off his genie theory. She says that Aladdin and the lamp was nothing but a romantic story. However, if it does turn out to really be a genie – then Castle should be careful, because according to Turkish legends, Genies are demons.

Back at the office, Beckett is working on an actual lead – not looking for Lars’ Genie. She thinks she may have found Lars’ partner, the man that helped him raid King Solomon’s tomb – his name is Mark Harlin. However, it could be a little hard tracking him down, it looks like he is making a run for it and his phone has been disconnected.

Castle heads back to his office – and Lars’ mysterious neighbor is waiting for him. She confesses that she isn’t really Lars’ neighbor, apparently her name is Lindsay Douglas and she is a journalist and is investigating stolen antiques from the tombs in Turkey. Lindsay says that she has another tip – but she wants the exclusive on the story. Lindsay tells Castle that Mike is going by an alias, and is travelling under the name of Al Aiden. Then, Lindsay disappears again – before Castle can ask her any more questions.

Ryan and Esposito track down Al Aiden, aka Mike Harlin at a nearby motel. While they are arresting him, Mike begins panicking and cries that the Genie is after him, and apparently the Genie is a woman – not a man.

Mike Harlin has an alibi – he swears he was at his mom’s birthday party when Lars was murdered. Mike confesses that he helped Lars dig up the tomb in Turkey. Apparently, someone paid Lars $500,000 – but Lars double-crossed the mystery person and never paid him back or gave him the antiques that they found. Harlin cries that the lamp is cursed and the genie has been Making his live hell ever since, he and Lars both are cursed.

Meanwhile, Castle does some research and learns that Lindsay lied about her identity …again. She’s not Lars’ neighbor, or a reporter either – Castle found the real Lindsay. Castle tells Beckett all about his new theory – he is convinced that the mysterious blond woman that keeps vanishing is the Genie … ad she wants Castle to be her new master.

At work the next morning, Esposito and Ryan have news for Beckett – they have tracked down the man that was helping Lars ship the lamp fro Turkey, his name is yurich Sezen. They head to Yurich’s carpet warehouse (of course Castle is convinced they must be magic carpets) – but when they arrive they find Yurich’s dead body…he won’t be much help to them.

Castle heads in the basement to snoop around, he finds a crate full of packing – and the magic lamp inside. A woman comes out of nowhere and pulls a gun on him, she tells him that she is going to have to kill him, and she calls for a guy named Travis to come help her. While Castle is trying to convince her to let him rub the lamp before she kills him – the mystery blond woman who calls herself Lindsay appears out of nowhere and hits Castle’s attacker over the head with a board. She helps Castle escape from the building – and then disappears … again.

Castle heads back to the police station – Ryan and Esposito are teasing him mercilessly over his Genie. Castle insists she is real. Sadly, Alexis shows up at the police station, she has bad news, the mystery blond woman’s nam is Genevieve Sutton, and she is definitely not a Genie – she works as a freelance security.

Beckett brings Genevieve in for questioning. She says that a very rich benefactor hired Lars to raid the Solomon tomb in Turkey and bring the artifacts to the US to save them. Apparently, a war is brewing in Turkey – and Mr. X was scared that the artifacts would fall in to the wrong hands and be sold to fund terrorism. But, Lars plan went awry when he hired Yurick to help him ship the artifacts back to the US. With Genevieve’s help – Backett and her men are able to bring in Phoebe, the woman that stole the lamp from Yurich and nearly killed Castle. In the interrogation room, Phoebe refuses to cooperate and is less than helpful – she won’t tell them where the lamp is, or who hired her to kill Lars.

Castle has a hunch – he pays Dr. Baker a visit again, Phoebe and Travis may have been their killers but it turns out Dr. Baker hired them. Dr. Baker had devoted her entire life to trying to find Solomon’s tomb – and Lars beat her there, she wanted the lamp and didn’t care how much it would cost her and who she has to kill in the process.

After the case is closed, Beckett, Esposito, and Castle rush to the hospital – Ryan’s wife Jenny is finally having the baby. After some near0deadly complications Jenny finally gives birth to a healthy baby boy and they name him Nicholas Javier (after Ryan’s partner Esposito).